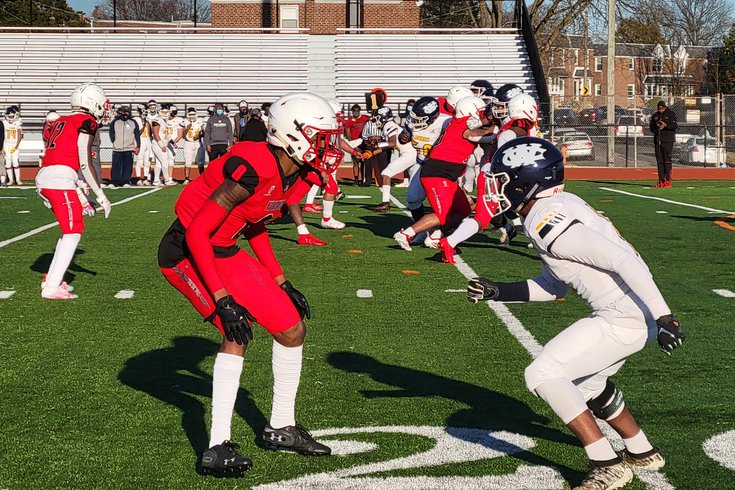 High School football is finally back in Philadelphia.

Northeast High defensive end Ken Talley is a walking, talking reality show. The 6-foot-3, 240-pound junior is engaging, funny, a human quote machine with a calculator for a brain. He misses nothing — on or off the field.

A little over a month ago, Talley knew the tally of how many days he had gone since he last played in a high school football game. It stretched way back to Saturday, November 16, 2019, and Talley had it down to the very day he went between games — 567 days exactly since he played against St. Joseph’s Prep for the District 12 Class 6A championship.

So, it meant a little something to be actually on a football field playing again as a group of Philadelphia Public League, Catholic League and suburban schools are doing this spring to compensate for the missed fall season that was wiped out due to the COVID-19 pandemic.

But the score didn’t really matter.

“People don’t understand that these kids were in a depressed state and the way the city is, with all of the violence, we need to keep an eye on them and keep them safe,” West Catholic coach Brian Wood said. “We’re playing right now. I have three seniors and I’m just happy that we’re playing.”

As of Wednesday, April 21, 2021, there have been 154 homicides committed in Philadelphia, according to the Philadelphia Police Department, a rise of 31% from this same time last year.

Many of the players on Northeast, West Catholic, Neumann-Goretti, Imhotep Charter teams, and many more, know of kids their age that were either killed or shot at before they reached 18.

Albie Crosby, a legendary Philadelphia coaching figure who is currently the head coach of Neumann-Goretti, has had five players killed in the 21 years he’s been coaching in Philadelphia.

“It’s tough, because we see these young people and all of the senseless murders going on right now,” said Crosby, who’s like the John Chaney of area high school football coaches, teaching life lessons beyond sports. “I had one player, Kristian Marche, killed in 2018 a day before he was going to leave for Penn State on a track scholarship. COVID is real, and this year has been very challenging, because when you think of anyone, through a cross-section of people, they are going through depression.

“This goes especially for young people, so for these kids to be playing football this spring means everything, because these kids right now don’t know about their future. Playing football at least gives them some semblance of normalcy. Colleges are allowing kids to come back another year, the pros are playing, but for these high school seniors, they’re not going to get another chance.

“For these kids, athletics inspires them to greater things and opens doors. No one gives a damn about these kids. In the inner-city of youth sports, when a young kid starts playing football around five, everybody, his mom, his dad, his grandma, comes and sees John-John play.

Crosby emphasized that football has become so much larger in Philadelphia in the last 10 years than it ever has before — major colleges are now coming to the area to recruit them. 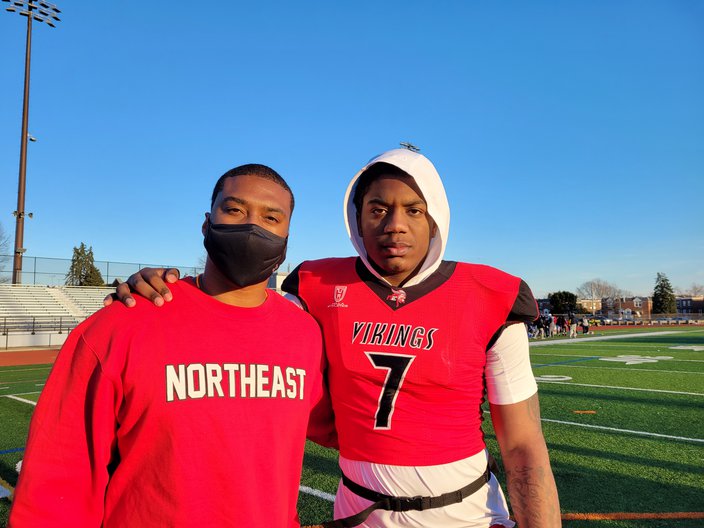 Without any game film to evaluate those who aren’t national level standouts, that can be a difficult process.

“Playing football this spring means the kids overcame adversity, by just playing, they have,” Crosby said. “Think about it, we took football away from these kids. I have a kid, Jon Fagley, who’s a 6-foot-4, 270-pound offensive lineman who’s a Mummer from 2nd Street.

“This kid has done everything I’ve asked of him, and done it the right way on and off the field, with a 3.8 GPA. I thought there would scholarship offers for the kid. This spring is it for him. He at least will get some film. With the NCAA allowing kids to come back, and the transfer portal opening, these 2021 graduates can’t go anywhere, because schools can’t take him, because they don’t have any room.”

Northeast’s new coach Eric Clark was looking at another Public League 6A championship last fall — and possibly more. The Vikings, with Talley, Chappell, and Jeudy returning, were supposed to be an elite team statewide entering the 2020 fall season.

“It’s why just playing is a victory in itself for our city and for city football,” Clark said. “This gets us a little closer to being normal. It doesn’t matter who wins. We’re just grateful that we get the chance to play this game we all love.

“We want to get quality film for our kids and get them to college. Without (playing this spring), many of them couldn’t. These kids had something important taken away. We can’t play for a league title or a state championship, but this spring is giving us something.”

“I’m set, going to Penn State, but I needed to play for the younger guys on our team to show them what I learned from coach Deion (Barnes, former Northeast standout now a Penn State assistant coach),” Talley said. “It’s been 567 days — that’s a lot of days to go without playing football. I missed it. It’s why it was so great being back.”