Hillary didn't do this on her own, ladies, so keep lifting her up

On Thursday night, history was made in Philadelphia, but it could be unmade in November if Democrats aren't careful

Sometimes, what you think of a person pales in importance to what they represent to others.

Hillary Clinton walking out on stage, hugging her only child, letting thousands of partisans scream themselves hoarse and starting to make the case as to why she should be the next president. Well, those were some overwhelming moments.

It mattered not that I hoped she’d lose the Democratic primary. It mattered wholly that – in winning – she became a totem for equality and perseverance in the face of staunch hatred, and, even more than that, it mattered that 161 million people now know that their dreams can become realities.

In becoming the first woman nominated for president by a major American political party, she removed barriers that I’ve never faced. It’s difficult to fully relate to something you’ve never known.

But looking at the faces of those who have, the tears of pride and relief of empowerment were unmistakable. It was a historical moment laid bare on both the macro and micro level. Those are rare in life.

The moment was bigger than Hillary Clinton and it was about more than her fist going through a glass ceiling.

It stripped away any pretense – even if only for a couple heady hours on one evening – of the world being controlled by men, political interests, crowd-pleasing talking points and hyper-partisanship everywhere from Capitol Hill and state houses across the country to Twitter and barstools. (Make no mistake about, those pretenses probably returned before you even read this.)

It was a long time coming, and it needs to be savored, appreciated and fashioned into a launching pad.

It was a night that everybody in the room – and, to a marginally lesser extent, watching at home – should proudly tell their (or other) children they saw with their own eyes, and encourage them to pass it down generationally.

But yes, it was also moment which occurred in a like-minded bubble. 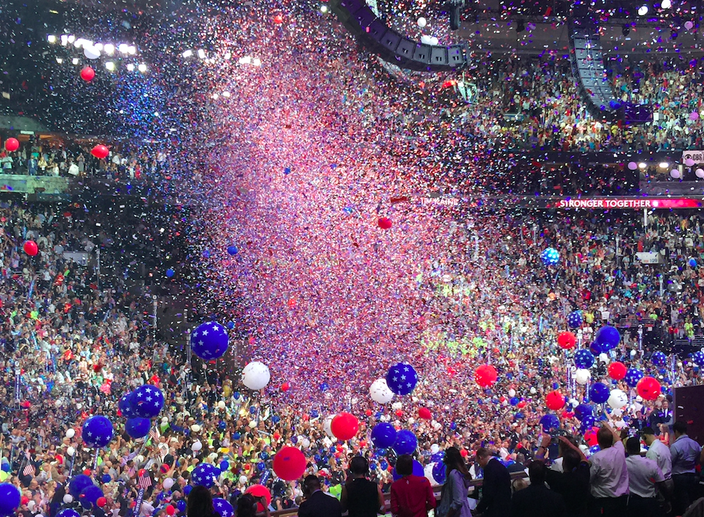 When everybody left the Wells Fargo Center, it couldn’t have taken long to realize that while a line has been etched in history books, it was largely symbolic. Unless they bottle up that passion that brought many to tears and put it to action, it will be a stepping stone, not the mountaintop of equality.

Winning a nomination isn’t cool. You know what’s cool? Winning a presidency to stave off the history-book caveat “but then she lost to a man who used fear to consolidate power and lead us into an isolationist era of American history.”

That kind of gut punch would reinstall Plexiglass on the ceiling instead of shattering it.

So, keep it up, ladies. I may not exactly like your presidential candidate, but I sure as hell love the fact that she’s made the world a better place for you.

Just because something emotionally remarkable happened on Thursday night in Philadelphia doesn’t mean the war has ended.

Over the course of four days at the Wells Fargo Center, I heard people – elected, famous and as run-of-the-mill as me – make passionate cases about fighting back against hateful, hurtful and engrained rhetoric.

I also heard the nominee’s family, co-workers and friends vouch for her as a wife, mother, grandmother and champion for the powerless.

As those balloons fell, and the confetti flittered to the ground, the joy and relief was infectious.

Nobody was worried about the fact that, outside those walls, those who’ve forced that woman to fight at every turn likely vowed to ratchet up their efforts. Nor should they have.

Like their candidate said, it’s not about what she can do, it’s about what they can do together.

Hillary Clinton alone wasn’t responsible for what happened Thursday. That would discount the efforts of those who’ve been and continue battling for fairness.

So, keep it up, ladies. I may not exactly like your presidential candidate, but I sure as hell love the fact that she’s made the world a better place for you. It doesn’t matter what I think of Hillary; it matters what I think about fellow humans.

The moment left me scooping up pieces of confetti from the ground so I’ll always have proof that I was there when the world changed for the better.

And while the looks on your faces brought tears to my eyes, I leave South Philly hoping those tears don't return should the anger of the outside world conspire to take it all away.