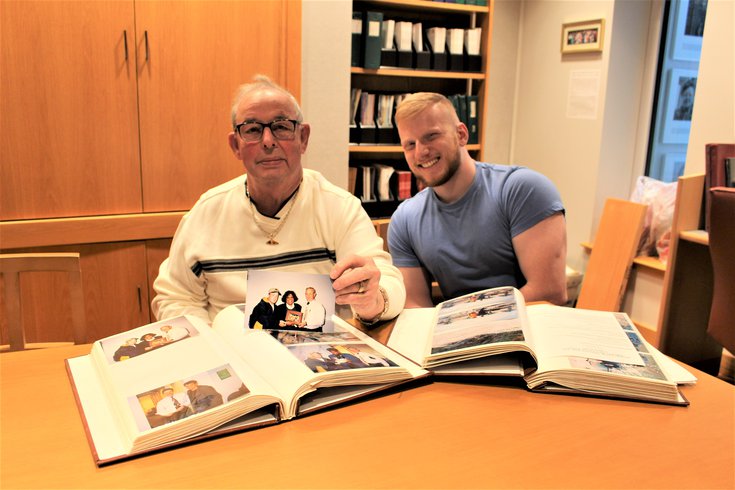 When Stockton University biology student Michael Ofansko was signing up for his courses this semester, he knew he needed a writing elective and wanted to take a history class.

That's why he picked Gail Rosenthal's Holocaust and Genocide Education class. What Ofansko didn't know was that he was carrying on a family tradition that stretches back three generations, a release from Stockton says.

“After I registered, my mom looked and said she had taken that class," Ofansko said. "She said her father had also taken the class and had gone to Israel."

Although those trips to the Middle East have been put on hold due to the pandemic, on Friday Ofansko's grandfather John Dominy returned to his alma mater for a reunion with Rosenthal, who is the director of Stockton's Sara and Sam Schoffer Holocaust Resource Center.

Dominy first enrolled at Stockton in 1994 at age 55 and graduated in 1999, decades after he dropped out of the University of Pittsburgh as a young man.

“Both of my parents died, and when my mom died I put my high school ring in her casket and promised her I would finish college,” he said.

Dominy picked Rosenthal's course because he was interested in World War II and wanted to go to Israel. He said that meeting Holocaust survivors there had a big impact on him and that he still carries the theme "never forget" with him today.

It may be disappointing for Ofansko that he can't go to Israel like his mother and grandfather did, but the Holocaust Resource Center and Rowan University are providing an opportunity for South Jersey residents to hear the stories of local Holocaust survivors later this week.

At 7:30 p.m. on Wednesday and Thursday, a series of original short plays titled "the Manya Project" will be performed in Rowan's Tohill Theater, at 201 Mullica Hill Road in Glassboro.

All were written by Rowan theater professor Anthony Hostetter and will be performed by some of the university's graduating drama students as their capstone.

One will be about the late Itka Frajman Zygmuntowicz, a native of Poland who lived in Northeast Philadelphia. She died in October 2020.

The others based on the memoirs of Vineland's Elizabeth Ehrlich Roth, Margate's Rosalie Lebovic Simon and the late Rose Ickowicz Rechnic of Atlantic City, who died in 2006.

There are currently 860 Jewish households in the Philadelphia area with a Holocaust survivor, the Jewish Federation of Greater Philadelphia reports.