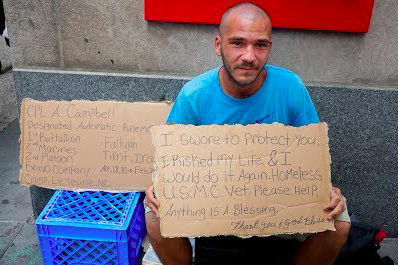 Alexander, a homeless veteran in Philadelphia, tells his story to Invisible People.

Update, 3 p.m. Friday: After several readers who said they know the subject of the video questioned his veteran status, PhillyVoice reached out to Mark Horvath of Invisible People to ask if he had confirmed the man's military record. Horvath would not discuss the claims on the record, but the video was taken down from YouTube shortly after we reached out. PhillyVoice is trying to independently verify the man's military record with the U.S. Marines. We wanted to provide an update to readers since the video is no longer available, and will update this story as necessary.

Philadelphia's homeless population increased by 10 percent annually in 2017, according to the results of a head count officials and volunteers perform throughout the city each year.

Despite continued efforts to provide shelter for vulnerable residents and reform the city's eviction practices, Philadelphia's homeless population remained at about 1,020 people as of January's count.

Approaching the problem in the aggregate is often the only immediate way to achieve measurable results. For the individuals living on the streets, surviving on the kindness of strangers rarely rises past anonymous exchanges on street corners and in subways, where SEPTA officials have urged tougher enforcement against panhandlers, to little avail.

Mark Horvath, founder of the non-profit Invisible People, was once a Hollywood insider with a six-figure salary. He lost his job and fell into disrepute, landing on the streets of Los Angeles, where he developed a drug addiction and became a con artist before turning his life around.

Horvath created Invisible People in 2008 to provide a platform on YouTube where the homeless could tell their stories firsthand. The organization collects donations to help individuals and advocate for policies that can alleviate the housing crisis in cities across the country.

On Independence Day, Horvath published the story of Alexander, a military veteran in Philadelphia who lost a portion of his foot in an IED blast. Alexander explains how he came to be in the position he's in and the steps he's taken to find help through resources provided by the city.

As Horvath points out on his YouTube page, keeping pace with the influx of homeless vets has proven difficult for many major cities.

"Rapid re-housing is an intervention designed to help individuals and families quickly exit homelessness and return to permanent housing," said Horvath, referring to Alexander's status. "The good news is there is a significant push to house homeless veterans. The sad news is even with the added attention and effort to help homeless veterans, there is not enough housing to get people off the streets. That is not going to change until the affordable housing crisis is resolved."