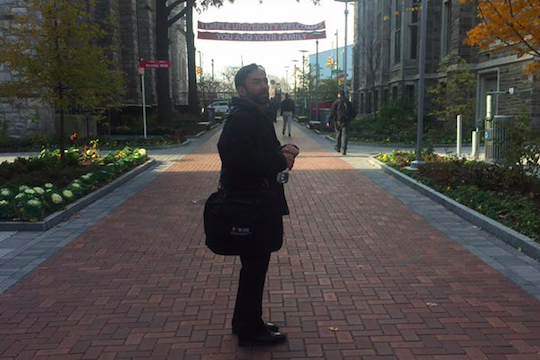 Ivan Cardona, a Puerto Rico businessman and Temple University doctorate student, has coordinated a number of humanitarian efforts since Hurricane Maria devastated the island in September. "I've never seen a hurricane of such fury," Cardona says.

When Ivan Cardona showed up to his doctorate class at Temple University in October, his fellow classmates greeted him with astounded expressions.

Cardona's native Puerto Rico had been devastated by Hurricane Maria, the second of two powerful hurricanes to hit the island in September.

Yet, Cardona somehow had made the trek to Philadelphia for his weekend residency in the Fox School of Business's executive doctorate in business administration (DBA) program.

The three-year program allows students to complete much of their schoolwork remotely, enabling many students – like Cardona – to live hundreds of miles away. But students must travel to Philly once every six weeks for a weekend of classes.

Amazingly, Cardona held up his end of the bargain. But he was about to do so much more.

"Everybody was extremely surprised that I made it and asking me if everyone was OK," Cardona said. "I realized how severe the storm had been. It was just horrible."

Cardona, 58, had taken a boat to nearby St. Thomas, flown to Miami and hopped on a connecting flight to Philadelphia. Only upon reaching the continental United States – where he could view news reports documenting the damage – did Cardona understand how much havoc Maria had wreaked on his country.

And he knew he needed to take action.

"I think that was the most eye-opening part of it all," Cardona said. "I had, contrary to most people on the island, access to an overall view to the challenges and obstacles that we were facing. People on the ground just knew about their families, their towns.

"Because I saw the big picture, because I was able to realize what a big problem we were in – automatically, it became 'What are the options?'" 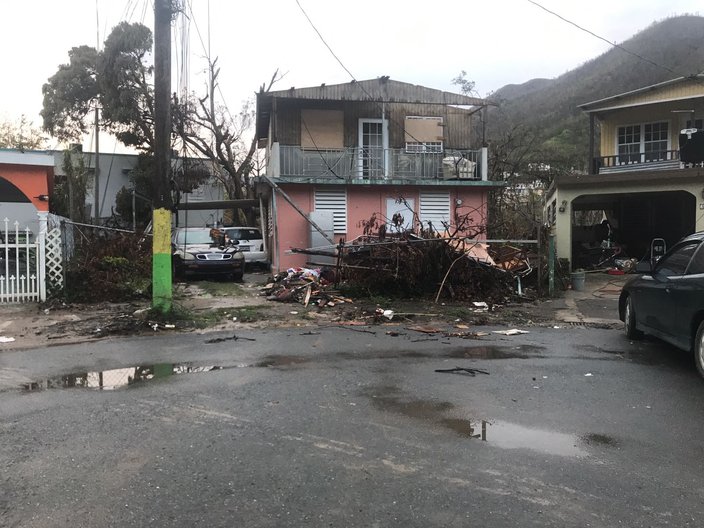 Ivan Cardona, a Temple University doctorate student, has sought to bring food, water and health care to Puerto Rican communities like this one, which were devastated by Hurricane Maria.

Hurricane Maria passed directly over Puerto Rico on Sept. 20, striking the island as a Category Four storm with wind gusts exceeding 150 mph. It hovered over the island for about 30 hours, dumping more than 30 inches of rain in some areas.

Cardona just had returned to Puerto Rico from his first residency when Maria hit. He hadn't had time to prepare his home, pick up groceries or buy water. He and his two young daughters rode out the storm – even as water gushed into their home near San Juan, the capital.

His marketing and promotions business, AlliaCOM, was obliterated in the storm. And the University of Sacred Heart, where he teaches, temporarily closed.

"It's been 80-odd days after the hurricanes and I still – every week – fill up my car with food and water and I take it to people who may not have roofs or electric service." – Ivan Cardona, Temple doctoral student from Puerto Rico

In the aftermath, Cardona waited in line for 10 hours to purchase a few gallons of gasoline and another four hours to use an ATM. He watched people bathing in the rivers and drinking stormwater that had collected on their roofs.

No one had electricity, hindering communications. Hospitals and health centers were closed, placing many lives at risk. Roads and houses were utterly destroyed.

But as Cardona later learned, the devastation elsewhere – particularly in the mountainous regions – was even worse.

"Someday, we're going to figure out, from the hurricane, how many people died afterward," Cardona said. "Because there were a lot of related incidents. There was no one able to properly calculate how many people actually died from health-related issues."

Three months after the storms hit, Cardona is doing everything he can to help, particularly in the inland areas that FEMA has been slow to reach.

"It's been 80-odd days after the hurricanes and I still – every week – fill up my car with food and water and I take it to people who may not have roofs or electric service," Cardona said. "They're living 14 or 15 people under one small home. Their other residences were destroyed. We're still facing a lot of challenges and we're trying to stand up and make a difference." 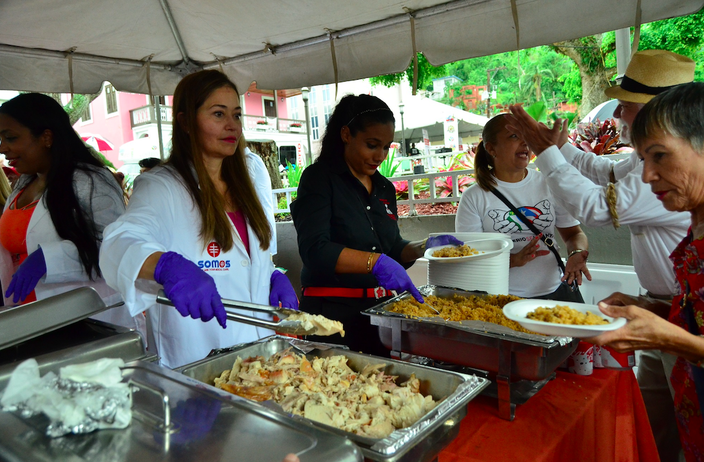 Aid workers from Somos, a New York-based nonprofit that aids Hispanic people, serve Thanksgiving dinner in Puerto Rico in the aftermath of Hurricane Maria, which left the island devastated.

'WE HAVE TO GO FORWARD'

Despite the storms, Cardona continued to travel to Philadelphia for his residencies, making trips in September, October and November.

His trips north not only offered him a chance to catch up on his studies, but also provided him an opportunity to bring back supplies and coordinate relief efforts.

"Everybody I study with is a high-decision maker in their respective fields," Cardona said. "I was able to use that experience and know-how and those connections to bring aid to Puerto Rico. At the end of the day, that's what it all became about." 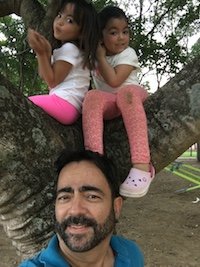 Ivan Cardona poses with his two daughters at a Puerto Rican park decimated by Hurricane Maria.

Using his connections – including those in his doctorate program – Cardona began coordinating relief efforts. Somos el Futuro, a nonprofit dedicated to the needs of Hispanics in New York, quickly got involved. So did Youth Emporium, an Atlanta-based nonprofit that does humanitarian work.

Cardona also helped coordinate what he called "the biggest Thanksgiving dinner in the center of the island." Through that effort, some 2,300 families received a nutritious holiday meal.

"Thanksgiving in Puerto Rico – it's very traditional," Cardona said. "It's a time when you thank God and you think about the good things and how much you're able to give thanks. This time was extremely challenging because there were people who were extremely distressed about their situation.

"It was really important for us to make them understand that we have to get up, we have to go forward."

"Ivan's descriptions of the devastation in Puerto Rico opened all our eyes to the reality of hardship for the million people still without power. His stories left us all in tears." – Susan M. Mudambi, academic director of Temple's executive DBA program

Earlier this week, he coordinated a toy drive that delivered gifts to 2,700 children in the Comerío and Naranjito regions, which still lack electricity and a reliable source of drinking water. A caravan filled with Christmas vehicles, musicians and entertainers stopped by 17 schools within 12 communities in those regions.

A little while ago, Cardona watched as his two daughters – ages five and seven – contently played with sticks and stones in the backyard. But he wants the children of Puerto Rico to have a few days where they can enjoy their childhood.

"They teach us every day – sometimes more than we teach them," Cardona said of the children. "Now, for Christmas we want to do anything we can to give them a couple of days of happiness and to forget about the hurricane and concentrate on their toys and their playing and their childhood." 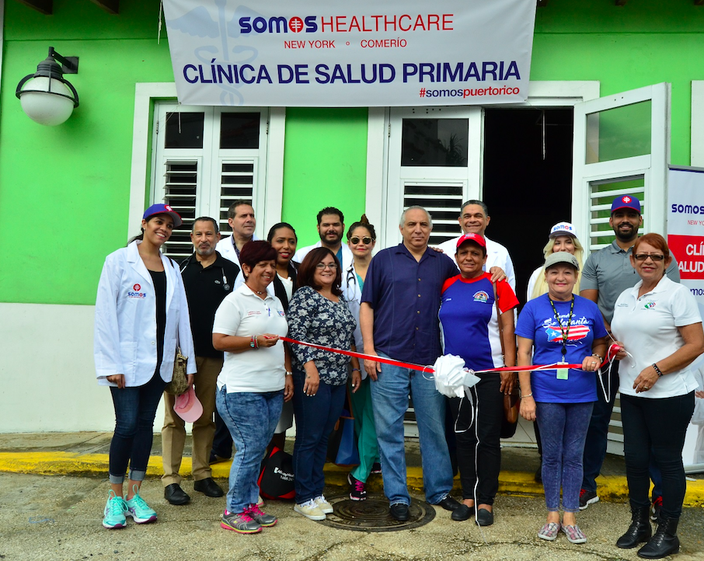 Somos, a nonprofit that aims to help Hispanic people in New York, helped open a pair of free health clinics in Puerto Rico after Hurricane Maria.

WHO ELSE WOULD HELP?

Cardona insists he is not a hero, but his Temple colleagues might suggest otherwise. They remain impressed by his dedication to both his classwork and his compassion toward others.

Susan M. Mudambi, the academic director of his executive DBA program, said a lump comes to her throat when she thinks of Cardona's passion for learning and his humanitarian efforts.

"Ivan's descriptions of the devastation in Puerto Rico opened all our eyes to the reality of hardship for the million people still without power," Mudambi wrote in an email. "His stories left us all in tears. His personal courage in providing for his family and friends and in protecting their future is remarkable."

Though Cardona could have taken a leave of absence from his studies, he chose to continue them while seeking to help his fellow Puerto Ricans.

"His business consulting business was physically destroyed, as were the facilities of many of his clients, but this terrible loss has spurred him to work even harder to keep up with his demanding DBA coursework," Mudambi said. "The DBA is his personal path forward to a new life and a new way of contributing to the recovery of his family and to Puerto Rico."

Cardona, however, said Philadelphia will always hold a special place in his heart. Having never visited the city prior to his first residency, he said lived up to its nickname as "The City of Brotherly Love."

He remains grateful to employees at Home Depot, Lowe's and CVS, among other stores, that provided him with discounts on supplies he brought back to Puerto Rico. He likewise praised the Uber and taxi drivers who did not charge him and the Sonesta Hotel for helping him ship a generator home.

"They didn't know who I was," Cardona said. "I was only equipped with some pictures on my phone and a tired demeanor. They did not have to, but they did."

Cardona admitted that his life is still "very uncertain," but he also noted that that is no different than anyone else in his homeland. Across the island, Cardona said, Puerto Ricans are holding out hope to see what the next day brings.