Latest on Hurricane Florence: Pennsylvania could see inches of rain in wake of storm 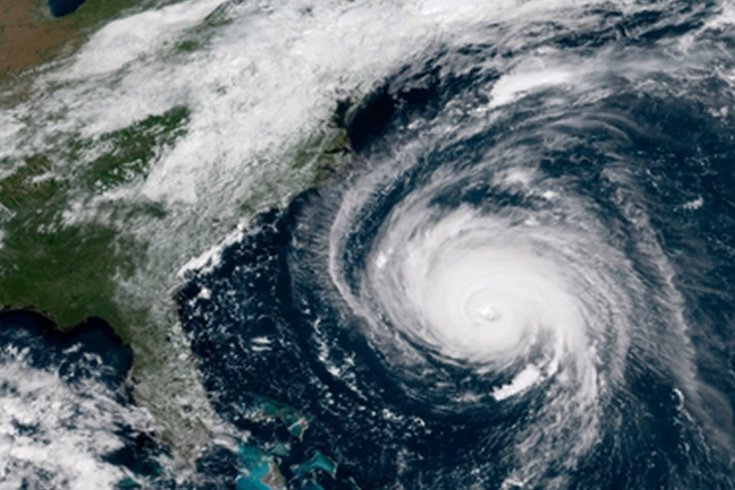 This image from the GOES-E satellite shows Hurricane Florence in the Atlantic Ocean, about 485 miles east-southeast of the Carolina coastline.

Former Hurricane Florence left behind a destructive path in the Carolinas after it doused the region with unprecedented amounts of rainfall and left 12 dead so far. The storm was downgraded to a tropical depression early Sunday morning by the National Hurricane Center, but life-threatening flooding remains a major threat in the region.

What does that mean for Pennsylvania? Early Sunday morning, the NWS tweeted a graphic showing where it expects Florence to head next, with a great band of rain stretching across central Pennsylvania:

"Patchy fog early this morning, otherwise more sun than clouds today with temperatures around 80 degrees this afternoon. Some heavy rain possible later Monday and Tuesday as the remnants of Florence quickly moves through," the tweet says.

If Florence continues to follow this new predicted trajectory, it looks like Philadelphia and New Jersey will avoid seeing more than two inches, but places like Lebanon and Dauphin counties, along with Pittsburgh, Harrisburg, and the western side of the state likely won't be as lucky. The middle of the state could see as much as four inches of rain over the next week.

The Jersey Shore coast is already beginning to see the effects of the storm. National Weather Service forecasters are warning of a high risk of dangerous rip currents developing along beaches due to swells from Florence.

As far as the Carolinas are concerned, U.S. forecasters expected the hurricane to produce total rainfall accumulations of 20 to 30 inches with maximum amounts to 40 inches in isolated areas near the storm's track.