Ilya, the famous manatee that swam all the way from Florida to New Jersey, has died

The adventurous traveler sustained fatal injuries from a watercraft encounter 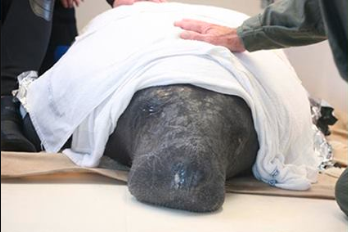 Illya the manatee became quite popular after he traveled all the way to New Jersey back in October 2009. Eventually he was rescued and taken back to Miami.

Ilya, a manatee that garnered quite a reputation for adventure back in 2009, has reportedly died after sustaining injuries from a watercraft collision in the Florida Keys this week.

The manatee was known for his routine summertime journeys up the East Coast, sometimes making it all the way north to Massachusetts.

But in 2009, biologists worried that Ilya was stranding himself in rapidly chilling waters, well into the fall. Manatees don't usually swim north of Georgia; ideal water temperatures linger around 68 degrees Fahrenheit.

By October of that year, he was spotted in New Jersey, near Jersey City, until a nor'easter blew into the area and scientists lost track of the mammal.

He was eventually spotted on October 29 lingering in the warm water discharge at an oil refinery in Linden, N.J. Emergency responders rescued him and took him to the Marine Mammal Stranding Center in Brigantine, where he was kept until he could be safely transported back to Florida – on a Coast Guard C-130 transport plane, according to NJ.com.

"We are saddened to learn of the passing of Ilya," the center posted on Facebook on Wednesday. "He was quite the star during his brief stay at our Center a few years ago. We spent many weeks tracking him while he navigated cooling NJ waters, before we were finally able to contain him in northern NJ. With the help of many agencies, we were successful in capturing him. He stayed in our pool for a few days to be evaluated, and then was flown down to Florida. So sorry big guy."

We are sad to report that Ilya, who became famous when he was rescued from cold waters in New Jersey in 2009, recently passed away after he sustained fatal injuries from a watercraft collision in the Florida Keys. His adventurous spirit will be missed by many. pic.twitter.com/Gmotm5sW4h

The Save the Manatee Club reported Ilya's death on July 31.