The 12-gun 'Diligence' is taking shape 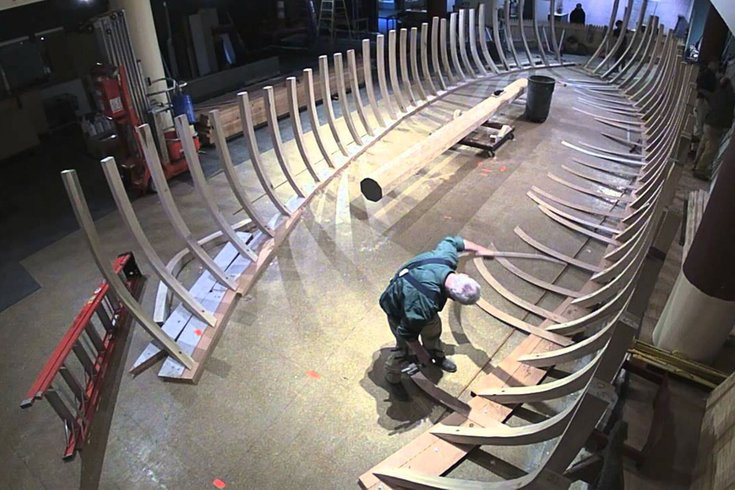 Read More
Since 1961, Philadelphia's Independence Seaport Museum has been a historical treasure trove for those interested in exploring and learning about the region's storied maritime past.
But now, instead of unearthing a historic relic, the museum is building a bit of history from scratch.
The Seaport's  boat shop is reconstructing a 18th century schooner to give visitors hands-on exposure to every process of shipbuilding.
Taking shape is the topsail schooner 'Diligence' of 1797, which served in the West Indies under John Barry during the Quasi War with revolutionary France. At the time, U.S. merchant vessels were a frequent target of French warships and privateers that sought to undermine the nation's repaired trade relationship with Britain.
Originally designed and built in Philadelphia by famed shipbuilders Joshua and Samuel Humphreys, the 12-gun "Diligence" was first intended for the Revenue-Marine (an armed customs enforcement service) but was immediately transferred to the Navy.
"We specialize in boats from this era and have always seen the great opportunities we can provide for educational programs," said John Brady, president and CEO of the Independence Seaport Museum. "We try to make these programs as interactive as we can and that's been our approach with 'Diligence'."
Brady told PhillyVoice that visitors to the exhibit, which is expected to be in full commission by the fall, will be able to engage with all aspects of the schooner, from steering and taking aim with its cannons to controlling the anchor and hoisting sails. There will even be a rock-climbing-like harness experience from the vessel's bowsprit, which extends from the prow and provides structural support.
In the meantime, visitors have been able to stop by the construction site at Penn's Landing, recreating the vital history of the shipyard in Philadelphia.
Here's a time lapse video of the 'Diligence' under construction:
"This is not only a chance for people to see what a real vessel would have been like, but a great way to hold classes that teach science," said Lily Williams, the museum's director of development. "Each element of the vessel demonstrates one of the six simple machines in science, so students can gain practical experience through learning by playing."
According to Brady, 'Diligence' will form part of a larger exhibit paying tribute to the founding of the Navy in Philadelphia. In this respect, the selection of 'Diligence' nods to Joshua Humphreys, regarded as a Navy founder who also served as its first master constructor.
The U.S. Coast Guard Barque Eagle is seen in March 2011 at Penn's Landing in Philadelphia on her first stop of a world tour to celebrate its 75th anniversary. It will be back as part of a Tall Ships celebration in June. (AP Photo)
The year ahead promises further excitement along the Delaware River as Tall Ships Philadelphia + Camden wades into town from June 25 to 28. The festival will feature the U.S. Coast Guard Barque Eagle (pictured above), along with French vessel L'Hermione, Brazilian vessel Cisne Branco, Canadian Barque Picton Castle, and Philadelphia's official Tall Ship, Gazela.

Tickets are available at www.TallShipsPhiladelphia.com or 877-4FLY-TIX. Ticket prices range from $12 festival admission/onboard ship tours to $150 for the Grand Parade of Sail. Tickets are good for attractions in both Camden and Philadelphia. Information also available on Facebook and on Twitter.