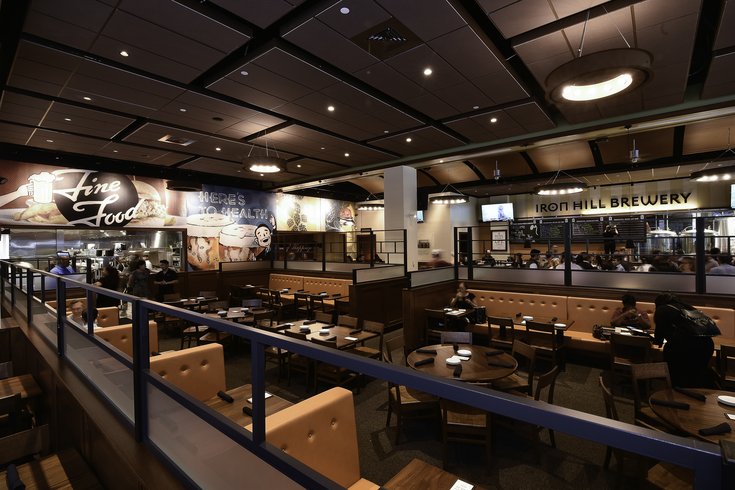 A shot of the new brewery's first metropolitan location in Center City, Philadelphia.

Delaware-based brewery chain Iron Hill Brewery & Restaurant opened its doors in Center City this week in an attempt to transform its own brand — and that of Market Street.

The brewery's latest expansion (it's up to 15 locations now, and counting) opened to the public on Sept. 13 at 1150 Market St. The location will add to the East Market project slated to reshape the businesses and look of Market and Chestnut from 9th to 12th streets in Center City, alongside office and apartment space at 1100 Ludlow, a Wawa, Mom's Organic Market, a large City Fitness, and the construction of Fashion District Philadelphia, PREIT's reimagining of The Gallery at Market East.

The newest Iron Hill can accommodate 275 at 8,500 square feet. It also includes an on-site brewery that holds 900 barrels of their product.

“When we opened our first Iron Hill 22 years ago, we never dreamed that one day we would be opening our 15th location in Center City Philadelphia,” co-founder Kevin Finn said in a media release. “We couldn’t be more excited to be part of the growth, energy and potential of the East Market neighborhood to offer a new place to enjoy delicious beer and food with good friends.”

It looks like a lot of the beers on tap are Eagles-centric — notably the Philly Special and Hungry Dog IPA — in the brand's nod to its new home. Other offerings during its grand opening include the Vienna Red Lager, Iron Hill Light Lager and White Iron Wit.

A pre-opening pep talk from @IronHillChief and, of course, a cheers before doors open at 5PM. We’ll see you then! pic.twitter.com/iD5wPddp8a

The space, which PhillyVoice toured back in August for a hard-hat preview, features floor-to-ceiling windows, large industrial chandeliers, and features pop art on the walls that reflect some Philly history. You can check out our entire first look here.

For the time being, Iron Hill is also donating $0.75 of every Triple Chocolate Hill dessert to Philabundance.