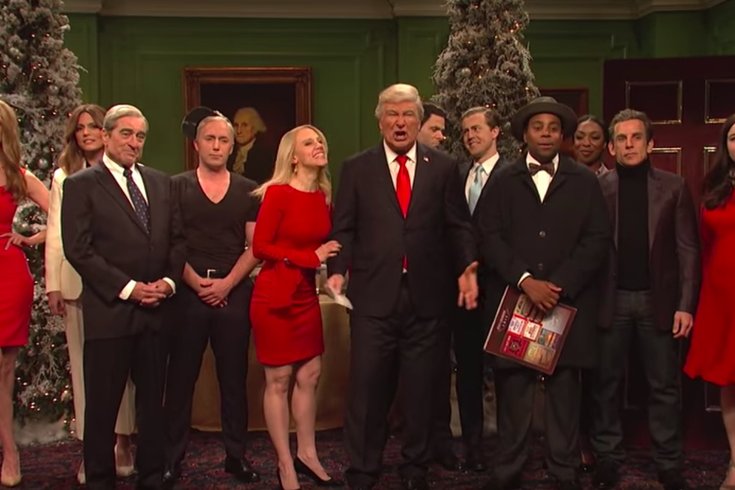 "It's a Wonderful Trump" in the most recent episode of "Saturday Night Live."

Mike Pence is a DJ, Melania is a real estate mogul, and President Donald Trump has a full head of real hair in an alternate universe presented in the cold open of "Saturday Night Live."

Alec Baldwin returned to play Trump, with the rest of the cast appearing as their usual Trump administration characters, in a spoof on the Christmas movie classic "It's a Wonderful Life." In this case, though, Trump is wishing to be free of the presidency's toils, and Clarence the Angel (Kenan Thompson) comes to show him that... yep, things would be better that way.

RELATED: Taylor Swift just announced the 'Reputation' tour will be a Netflix special and dropped a trailer

In this alternate reality, Press Secretary Sarah Huckabee Sanders is doing PR for Facebook, Ashley Madison, and the "Romaine Lettuce Association." Kellyanne Conway, no longer "eaten alive by lies," now talks to her husband. Also, it turns out, all those Hillary Clinton emails were just coupons from Bed, Bath & Beyond.

Best of all, a Muslim immigrant from Syria was welcomed to the United States and found a solution for Trump's hair loss while working as a doctor here.

Check out the full scene below, and keep an eye out for a handful of celebrity cameos also reprising their Trump-era roles.