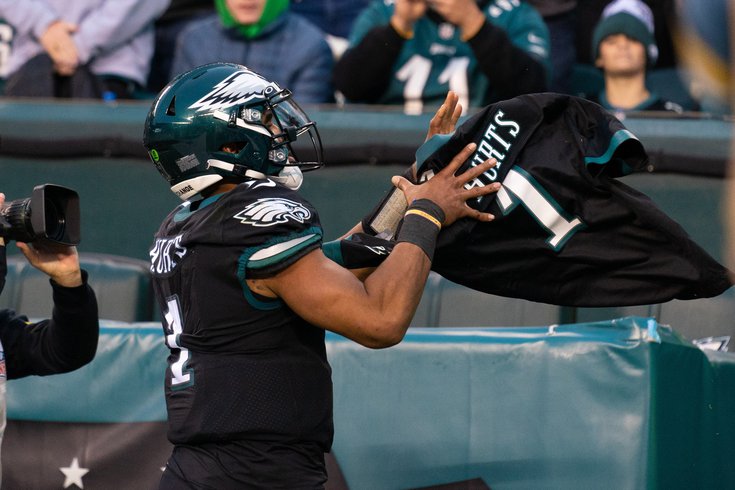 Eagles QB Jalen Hurts celebrating his touchdown run against the Saints back on Nov. 21, 2021.

So Jalen Hurts is trying to get a clothing line off the ground.

The trademark application for "HURTS SO GOOD" was filed by the Eagles QB on Monday and would be used to brand "Mens, womens and children's clothing, namely shirts, jackets, sweatshirts, pants, shorts, vests, gloves, socks, sweaters, underwear, skirts, hats and belts" according to the U.S. Patent and Trademark Office resgistry.

Trademark attorney Josh Gerben spotted the application Friday morning and tweeted it out.

Jalen Hurts has filed a trademark application for:

Hurts is entering his second season as the Eagles' starting quarterback and there are lingering doubts as to whether he can be the team's long-term solution under center.

But with one of the best offensive lines in football in front of him and having A.J. Brown brought in to pair up with DeVonta Smith at wideout, the 23-year old should have the best situation possible to put those doubts to rest.

And look, with a potential clothing line called "Hurts so Good" how can you not be the guy?

I mean, granted, the name kind of fell into his lap there, but an easy layup is still a layup, and I can easily see hats and shirts selling out fast if Hurts gets off to a hot start this season.

Just, you know, make whatever gets produced a little more visually interesting than the Eagles' new wordmark.

During OTAs the past couple of weeks, a lot of questions were asked both to coaches and players about Hurts' improvement as a passer.

And while that part seems to be coming along, an understated part of Hurts' development is his seeming awareness and embrace of his platform and celebrity.

Before saying anything about football in his last round of media availability, Hurts spoke out passionately against gun violence in the U.S.

He has also been becoming an increasingly regular face within the community, and with the trademark application for a clothing line, now seems to be working toward becoming a bigger face within football.