But also probably would have gotten sacked a few times 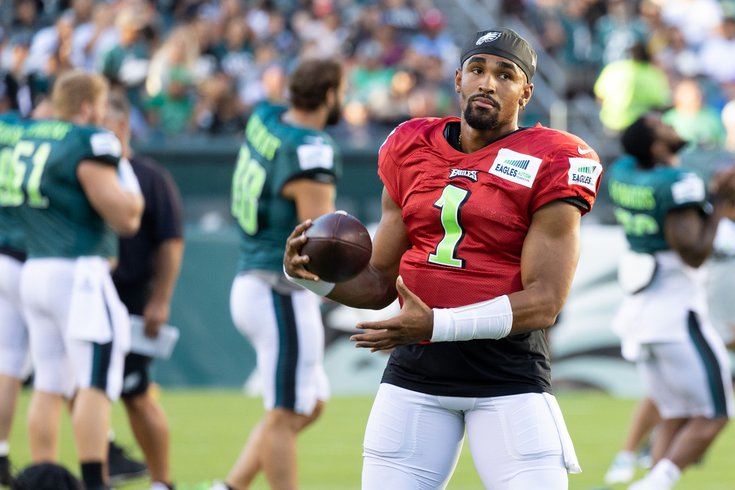 With the Eagles slated to head to Cleveland and then to Miami in the next two weeks, Tuesday's practice at the NovaCare Complex was the last day of "training camp" with media members and fans watching all of practice.

Jimmy Kempski will hit the road with the team for their joint endeavors, but for our purposes, this is the last Jalen Hurts watch we'll be able to write.

The Eagles QB had a pretty solid day, overcoming a slow start in the red zone with some highlight plays later on during team drills.

Here's a play-by-play look at how he performed Tuesday:

Play 1: Hurts took his time and let the pocket develop before uncorking a teardrop style pass to Zach Pascal in the back of the end zone for a clear touchdown.

Play 2: With good coverage all around, Hurts takes a risk and throws into some heavy traffic in the middle of the field. The pass does not find Quez Watkins' hands.

Play 3: With five receivers, including Boston Scott lined up wide (returning from a concussion), Hurts hits DeVonta Smith for five yards over the middle.

Play 4: Hurts checked down his receivers before rolling to his right and targeting Pascal once again in the end zone. The pass was on the sideline side of Pascal, who had a chance at it, but the window for a completion was tight and the ball hit the turf.

Play 5: A pass attempt over the middle intended for Dallas Goedert was batted down after a nice play from Kyzir White.

Play 6: With A.J. Brown in motion, Derek Barnett made a great play up the middle for what was whistled dead as a sack.

The first team offense and defense backed up to the 45-yard line where they ran more 11-on-11 plays.

Play 7: A designed keeper up the middle for six yards.

Play 8: A quick completion to Brown out of the slot for about three yards set up a third and one.

Play 9: A quick pass to Smith on the outside gained the first down.

Play 10: Hurts ran up the middle again and was credited with about three yards on the keeper.

Play 11: With Smith in motion from left to right, a shuffle toward his man opens him up for a nice catch for a first down. The connection with Smith was there all day today.

The skill players, defensive backs and linebackers assembled for 7-on-7 at the red zone. This would prove to be one of Hurts' more impressive sessions of the day.

Play 12: A quick completion to Smith for seven yards just outside the hash marks.

Play 13: With no one open, Hurts scrambled left but was not on the same page as his wideout in the end zone, who turned away from the goalline as Hurts threw inside of it.

Play 14: A touchdown pass to Goedert, who ran a great route to get inside his man at the goalline.

Play 15: Another completion to Goedert for about 11 yards.

Play 16: A touchdown pass to Goedert over the middle in the final of three straight targets of the tight end. He's proving to be quite the big and versatile target for Hurts over the middle.

Play 17: Hurts threw it incomplete for Kenny Gainwell along the far sideline. It might have been a drop, as the throw seemed to be on the money, leading Gainwell to the outside near the end zone.

Play 18: Hurts looked for Smith near the sideline right out of the gun and while he threw it a bit high, Smith brought it down with his sharp hands, and tip-toed both feet along the sideline for an impressive eight-yard completion.

Play 19: Brown got himself wide open near the sideline getting enough for a first down before getting run out of bounds.

Play 20: A quick pass to Goedert went for about three yards.

Play 21: Another target for Gainwell fell incomplete near the sideline.

Play 22: In a controversial but highlight play for both the offense and defense, Hurts was left vulnerable to a blitzing Haason Reddick, who would have had a clear sack if he was allowed to bring down the quarterback. After Reddick ran past him, Hurts scrambled to his left and made a running throw to Smith, who dove to bring in the 20-plus yard pass.

Play 23: A shotgun handoff to Scott goes for a few yards.

For this next play, Nick Sirianni yelled into a bullhorn that the team had one play to run with one second left from the 2-yard line.

Play 24: A play action snap that appeared to be an RPO saw Hurts keep it and find Goedert for a dramatic touchdown over the middle.

The first team ran one last set of plays from midfield, 11-on-11.

Play 25: A handoff on what looked to be a reverse play to Gainwell went for a few yards.

Play 26: A keeper for Hurts gained a few more yards.

Play 27: Cox had a clear sack through the middle, but Hurts kept playing and threw it incomplete to Gainwell.

Play 28: A play action completion to Brown down the sideline. Brown beat his man, Josh Jobe, pretty badly here with K'Von Wallace sprinting in to help on the play. Brown went 40 yards for a score.

Play 29: With lots of time in the pocket, Hurts zig-zagged around offensive and defensive linemen And hit Goedert across the middle of the field on a crossing route.

In all, Hurts definitely looked good Tuesday, with most beat writers agreeing his stock was up after the final day of training camp. Our unofficial tally had Hurts complete 16-of-23 passes, with five "touchdown" passes. He targeted his tight end seven times, with six of his 16 completions going to Goedert.

The Birds have a walkthrough/travel day Wednesday before they begin two joint practices with the Browns Thursday and Friday.