Tickets include a three-course meal for takeout from the restaurant 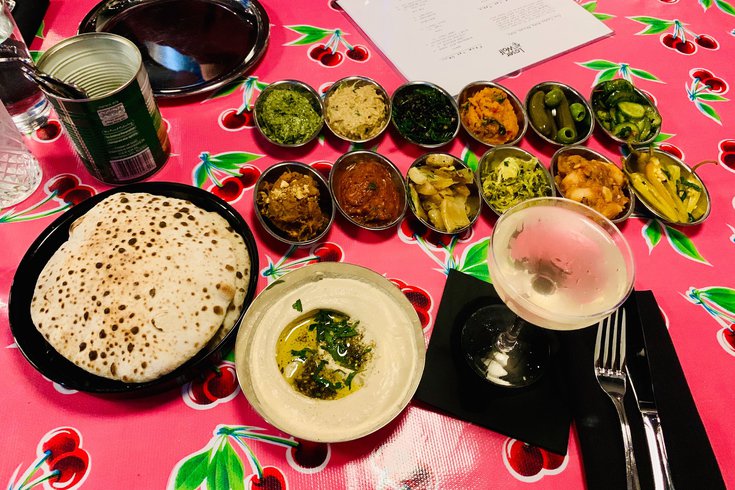 Laser Wolf is Michael Solomonov’s Israeli grill in Fishtown. Pictured above are salatim, hummus and pita, which is served with each meal.

Chefs from 10 cities will participate in the James Beard Foundation's Taste America on Sunday, March 21.

Tickets for the virtual event include a three-course takeout meal created by a local chef, plus wine and Rabbit Hole whiskey to be enjoyed at home and access to a national broadcast featuring a lineup of chefs and special guests from across the country.

In Philadelphia, chef Andrew Henshaw of Laser Wolf is participating. His meal includes hummus and pita with salatim (salads, dips, slaws) to start, then a few items from the grill.

They include Moroccan chicken with apricot, chickpea and pickled chiles; lamb neck with glazed onions, date, and harif; and Iraqi barbecue beef short rib with passion fruit and amba. It all comes with carrot-saffron rice pilaf. There's also a vegan entrée available for those who don't eat meat.

For dessert, Henshaw is making a lemon bar konafi with shredded phyllo and lemon curd.

The Taste America broadcast will begin at 8 p.m. In addition to Henshaw, 11 other chefs from all over America are taking part in the event.

According to the James Beard Foundation, 70% of all tickets sold will go directly to participating chefs' restaurants to support their business, with 30% supporting the foundation's national programming, including the Open for Good campaign, which is committed to helping independent restaurants survive the COVID-19 crisis.

The semifinalists for the 2020 James Beard Awards were announced last February, however, the awards were cancelled. The foundations also cancelled the 2021 awards.