Local contestants to square off in 'Jeopardy!' Tournament of Champions semifinals

Kevin Walsh of Williamstown, N.J. and Ryan Bilger of Macungie, Pa. will compete in the game show's second of three semifinal matchups this Tuesday 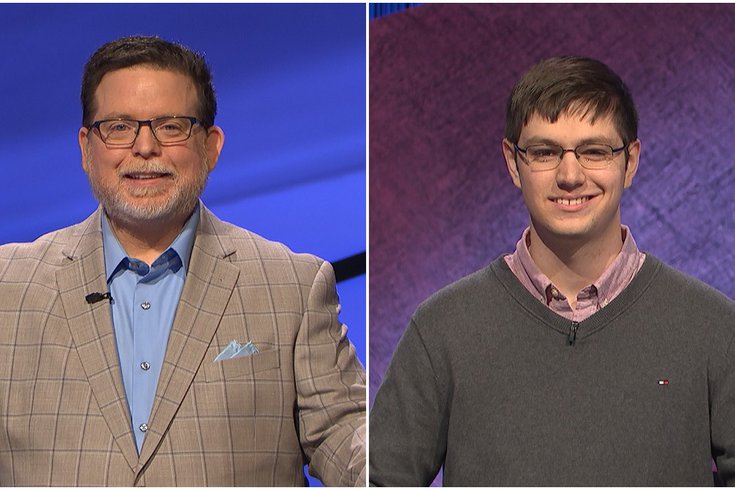 Kevin Walsh (left) and Ryan Bilger (right) are two of the nine contestants who advanced through the quarterfinals of the game show's annual event.

Two contestants with ties to New Jersey and Pennsylvania will go head-to-head this Tuesday in the semifinals of the "Jeopardy!" Tournament of Champions.

Past champions Kevin Walsh and Ryan Bilger will square off in the game show's second of three semifinal matchups this Tuesday at 7 p.m. on 6ABC.

Originally from Williamstown, Gloucester County, Walsh won this past Thursday's fourth of five Tournament of Champions quarterfinal matchups that aired last week. The South Jersey native and story analyst won $16,000 in earnings on his way to defeating a STEM programming coordinator from Tulsa, Oklahoma and a choral music director from Grosse Point, Michigan.

Walsh earned over $113,000 during his five-game winning streak on 'Jeopardy!' last October.

Walsh's win came just three days after Bilger, a native of Macungie, Lehigh County, competed in the game show's Tournament of Champions first quarterfinal matchup last Monday. Bilger was a four-time champion on the show in July 2019 and earned over $109,000 in winnings.

Bilger won $32,405 during last Monday's competition to advance to the semifinals. The Gettysburg College alum and West Virginia University graduate student defeated a math teacher from Albuquerque, New Mexico and a writer and stay-at-home mom from Hutto, Texas.

But Bilger's win was overshadowed by some criticism he received on social media from viewers who were not happy with his reactions to correctly answering two Daily Double clues. One of his celebrations included pounding his chest after getting the correct answer to a clue that involved Pennsylvania.

Bilger took to social media to respond to his critics who thought he was being too cocky and overconfident. Several of Bilger's fellow contestants, including Walsh, came out in support of him.

The 10-day Tournament of Champions began last Monday and runs until this Friday, May 28. The tournament consists of 15 top contestants, including Walsh and Bilger, going for a $250,000 prize. Second place gets $100,000 and third place walks away with $50,000.

After the quarterfinal round last week, nine contestants have moved onto the semifinals this week. Five quarterfinal winners, plus four non-winners with the highest money totals, advanced.

The three semifinal games will take place Monday through Wednesday. The winner of each game will advance to the two-day finals on Thursday and Friday.

Now in its 37th season, "Jeopardy!" is currently searching for a permanent host after the legendary Alex Trebek passed away in November 2020 at the age of 80, following a nearly two-year battle with pancreatic cancer. This event is the first "Jeopardy!" tournament without the show's longtime host.