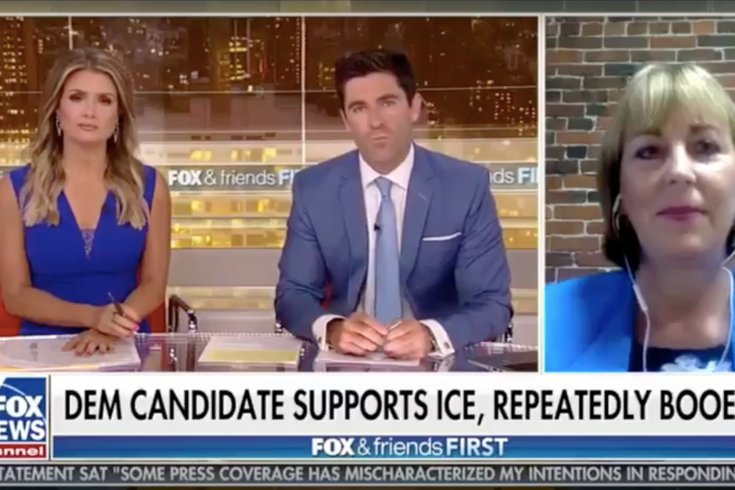 'FOX & Friends' hosts Jillian Mele and Rob Schmitt interview Massachusetts state senator Barbara L'Italien during a segment in which they though they were going to interview Arizona congressional candidate Ann Kirkpatrick.

Former NBC Sports Philadelphia anchor and current FOX News host Jillian Mele responded directly to one media critic who blasted her after a botched segment on the show, "FOX & Friends."

Mele was on the desk along with co-host Rob Schmitt on Monday morning when they introduced a woman who they thought was Arizona congressional candidate Ann Kirkpatrick.

Kirkpatrick, a former Democratic U.S. representative who is running to return to the House after a failed 2016 Senate campaign, recently made headlines for supporting Immigration and Customs Enforcement amid widespread criticism of the agency by others in her party for separating parents from their children at the border.

So, "Fox & Friends" had Kirkpatrick on the show Monday. Except it wasn't her. As the Lowell Sun reports, FOX producers reached out to Joe Katz, who used to be Kirkpatrick's communications director. The problem being that Katz now works for Barbara L'Italien, a Democratic Massachusetts state senator and current congressional candidate as well.

Katz played along with the FOX producers, and so while Mele and Schmitt thought they were interviewing Kirkpatrick, they actually got L'Italien, who used her time to communicate a very different message about immigration directly to President Donald Trump, a frequent viewer of "FOX & Friends."

You can watch how the segment played out below:

"Despite speaking to producers prior to the interview, L’Italien did not identify herself as anything other than Kirkpatrick until she was live on air, at which point we ended the interview," Dunne said.

The segment drew heavy media attention for the gaffe — not the first high-profile blunder Mele has been apart of since joining FOX — but one particularly scathing critique came from Jamie O'Grady, the lawyer and writer who co-founded the now-defunct sports website The Cauldron.

On Twitter, O'Grady retweeted a clip of the segment and questioned Mele's career decisions.

What the hell happened to @jillianmele? Wonder if she'll look back someday and wish she had been more patient instead of selling her soul to move up the media food chain. #Sad https://t.co/8xBOXJYKsX

Mele, who left Philadelphia to join FOX in New York last year, responded to O'Grady. (She also apparently blocked him.)

"I would never criticize/judge someone based off their career decisions. If you don’t like what I do, don’t follow, listen or watch. But it is NOT your right to tell me that I am wrong abt (sic) my life," Mele wrote.

What happened to me? I took a job that I wanted and love. How dare you criticize and judge someone else when what I do, has zero impact on your life. That’s what’s sad. https://t.co/Mze64gMxBU

I would never criticize/judge someone based off their career decisions. If you don’t like what I do, don’t follow, listen or watch. But it is NOT your right to tell me that I am wrong abt my life. My choices are just that, mine. I’ve had a heck of a day, hope you have a good one.

O'Grady countered by noting his beef was with Mele saying that immigrant children have been reunited with their parents, calling it an "outright lie."

Sorry, @jillianmele, I didn't get the memo on what is and is not my right to say. When you outright lie about kids being reunited w/ parents, expect to be called out for it. I get it ... you're not a parent, but please, do even a cursory bit of research before spewing propaganda. pic.twitter.com/qMRnxYCdt9

Someone should tell @jillianmele. I’m sure she’ll be super eager to correct the record on tomorrow AM’s Trump TV broadcast. https://t.co/tl0N51t1Qj

According to USA Today, the Trump administration said in a court filing Tuesday that 879 parents have been reunited with their kids while 538 more have been cleared to be reunited. However, the administration also admitted that more than 450 parents may have been deported while their children are still in the United States, while the cases of another 463 parents are still under review.