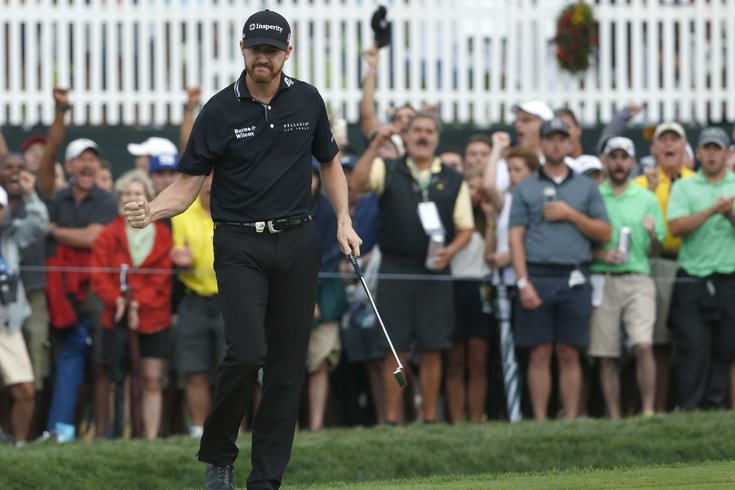 Jimmy Walker reacts after making a birdie on the 17th hole during the final round of the PGA Championship at Baltusrol Golf Club.

Jimmy Walker was about to attempt his birdie putt on the 17th green at Baltusrol on Sunday when the roar that began just over 600 yards away finally reached his ears.

Ahead on the 18th hole, Jason Day had just landed his second shot, from 256 yards out, hole high. Two strokes behind at the moment, the reigning champ had put himself in position to make eagle on the 72nd hole of the PGA Championship.

And the crowd responded as expected.

"The 2-iron into the green was probably one of the best 2-irons I've ever hit into a par 5, especially under the circumstances," Day said after the round. "And you know, as soon as I hit it, it felt perfect straightaway, and I knew it was just kind of cutting up against the wind. It was going to land soft. It was going to be really nice."

Back on 17, Walker regrouped and did exactly what you need to do if you want to call yourself a major champion. He drained the putt to go up three strokes with one hole to remaining.

"I heard [the roar for] Jason," Walker said. "I thought – I'm pretty sure it wasn't [Emiliano] Grillo that hit the shot that everybody was so pumped about. I figured it was Jason. I heard him hit the driver and I heard everybody was pumped, because he pumped one, I guess. And then I heard the second roar. So I knew I needed to make that putt, and I did, and then made the 5 on the last. Made it a little tougher but it was awesome."

Every first-time champion has a moment, a test, like the one Walker had just aced. Unfortunately for him, sometimes, there’s more.

Day, the No. 1 golfer in the world, made his eagle on 18, putting him at 13-under for the tournament and cutting Walker’s lead to one stroke.

"It was nice to get the eagle, just to try and make Jimmy think about it, but obviously, Jimmy just played too good all day," Day said. "The birdie on 17 was key for him."

Still, the only thing standing between him and the Wanamaker Trophy was 554 yards of green. That, and five strokes.

After finding the fairway off the tee, Walker pushed his second shot right and into the rough, behind the green-side bunker and with the majority of the putting surface on the wrong side of the hole.

The drama is building.

Jimmy Walker misses the green on 18 with a one-shot lead. #PGAChamp https://t.co/W1RIegpoat

And as is typically the case on Sundays — especially in majors — the next shot is often the most important.

Another test, another passing grade for Walker. He landed his chip past the hole, leaving himself about 34 feet to go — sure, it wasn’t Tiger on 16 at Augusta, but it certainly earned a passing grade.

Two putts for the championship. pic.twitter.com/NJ4URxykNL

Two putts later, including the three-footer to cap off a final-round 67 (and 72-hole score of 14-under, 266), the 37-year-old American had claimed his sixth tour victory … and his first major title.

“Sometimes pars are hard,” Walker said. “But we got it.”

Both shots — the birdie putt on 17 and the chip on 18 — were equally impressive, but for somewhat different reasons. And in retrospect, the putt on 17 was the difference between a celebration for Walker and a three-hole playoff against the best golfer in the world.

"It's surreal," he said after having a few minutes to drink it all in. "I mean, it really is. I would have said it would have happened the last couple years, the way I was playing. I just had not quite played as well as I would have liked to this year but I knew it was close. Felt some things were clicking last week.

"God, just to be in it and be there and have a chance and then to finish it off is just – it's so gratifying. I mean, it really is. Everything I've done up to this point, helped this happen."

While you can say that any putt made by Walker throughout the entire PGA Championship made the difference, including his final shot of the week, but there's no telling how the 72nd hole would have played out if not for the way the 71st ended.

Day, who had to settle for second place, is familiar with the kind of pressure Walker was under and was impressed by how his friend – he referred to him as a "tremendous bloke" and said the two text all the time – handled himself in the face of enormous, and mounting, pressure.

"I can tell you now that I'm always stressing out. I'm always, I'm over shots, I'm like, okay, this is so hard. I know that if I'm feeling that, everyone else is feeling it."

If a former major champion has to fight off his nerves, it's hard to imagine what was going through Walker's mind.

But according to the new champ, that birdie on 17 unburdened him of a lot of the pressure that could have caused him to crack.

"Well, you know, I said when I birdied 17, I figured that would probably end it," he admitted. "You think they are going to make three, and you're going to have to make a five. But you know, I'm standing out there and I had a good front number and I'm like, let's just send it up there. 19 out of 20 times, you're going to make a five going for this green in two. Made it a little more difficult than I would have liked, but awesome to make the last putt."

To Walker, that seemed like an appropriate ending to the week.

"There was no -- there was nothing easy about the day, really about the week, for that matter, especially coming down the last hole," he added. " It was a really cool way to finish -- making a putt like that, to win, right in the middle, was just awesome."