Fire at Jim's Steaks brought under control on South Street 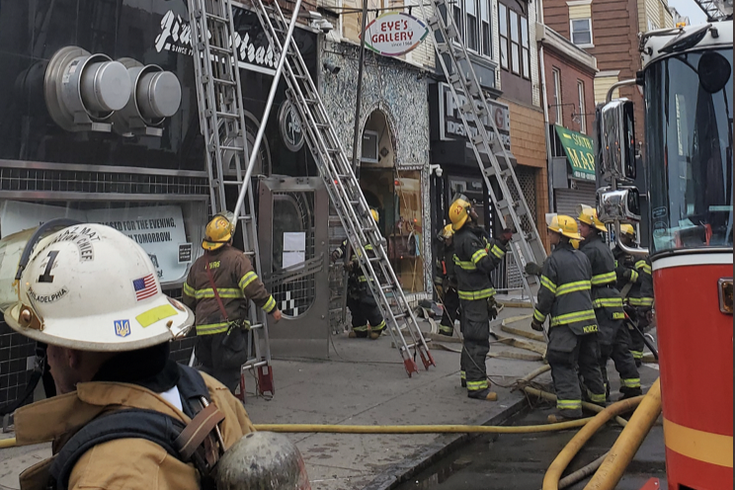 A two-alarm fire that broke out Friday morning at Jim's Steaks on South Street was brought under control after firefighters battled the flames for more than four hours, officials said.

Philadelphia Fire Department Commissioner Adam Thiel said during a press briefing that he's concerned about the structural stability of the building, though it remains too soon to fully assess the degree of damage. City property records indicate the four-story building was constructed around 1900.

"We're taking a defensive posture in an abundance of caution, and we're hopeful that we'll be able to preserve as much of the property as possible – at least the building itself," Thiel said.

Jim's South Street has not yet shared how long the business is expected to remain closed.

More than 125 firefighters and nearly 60 vehicles responded to the fire at the cheesesteak shop, at Fourth and South streets, around 9 a.m. Dark smoke poured from the building's upper levels as the blaze intensified.

All of the restaurant's employees and those on the upper floors were able to evacuate safely before firefighters arrived. There were no injuries reported. Traffic was temporarily closed on South Street between Third and Fifth streets.

WATCH LIVE: Chopper 6 is over a 2-alarm fire at Jim's Steaks on South Street. https://t.co/KcyeQsnGTb pic.twitter.com/W8fJSk7wyc

Jim's Steaks on South Street is currently on fire. All employees got out safely. pic.twitter.com/Cw30lX7Ko1

stands up - takes off hat - puts over heart - dabs eyes

this was my preferred steak jawn - meat slicer over the grill - #SouthStreetILoveYou pic.twitter.com/0Hvjm9oxyD

The fire was brought under control around 1:30 p.m. after firefighters had broken through windows on the second floor to make sure all flames in the building were extinguished.

An investigation into the cause of the fire will be led by the Fire Marshal's Office.

The Art Deco storefront at Jim's South Street dates back to 1976, when owner Ken Silver and his father opened their cheesesteak shop. The original Jim's Steak chain was founded in 1939 on North 62nd Street in West Philadelphia. The South Street restaurant became a separate entity in 2011, while another Jim's Steaks in Springfield, Delaware County has operated since 1999.