The two-level, 4,000-square-foot sports bar will reopen in early to mid-September 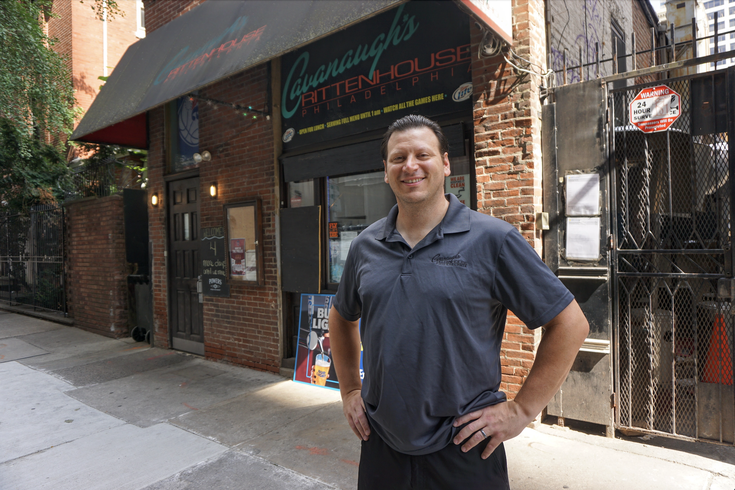 Cavanaugh's director of operations Mike Anderson stands outside the original Rittenhouse location at 1823 Sansom St. The sports bar will be moving to a larger space at 1921 Sansom St. in September.

Cavanaugh's Rittenhouse will mark the end of an era Saturday night when the sports bar temporarily closes while it moves into a bigger space.

The sports bar will hold a goodbye party for its home at 1823 Sansom St., where it has been a popular happy hour spot and a bustling place to watch games since 2008. It will move one block west to a 4,000-square-foot, two-level space at 1921 Sansom St. with a new look and an expanded menu. The bar is expected to reopen in September.

"Moving into a new space is a chance for everything to be fresh, new and exciting," said Mike Anderson, Cavanaugh's director of operations. "We will have 10 TVs behind the main bar. There will also be an 11-foot by 6-foot video wall that will be viewable from everywhere inside the new space."

The new space is owned by Pearl Properties and is connected to the 24-story Harper apartment tower.

Cavanaugh's is led by business partners Kenneth Hutchings and Patrick Pawliczek, who began working together at the original Cavanaugh's University City in the 1990s. They later opened Cavanaugh's River Deck on Columbus Boulevard in 2003, followed by Cavanaugh's Rittenhouse and Cavanaugh's HeadHouse.

The owners decided it was time to relocate from the Rittenhouse building, which had plumbing issues and maxed out electrical capacity, Anderson said. Pearl Properties now owns the 1823 Sansom St. location in addition to the new space.

The upcoming location, which was not previously occupied, will be fully renovated and will incorporate decor from the existing space into an updated design. It will have two main bars, 22 televisions, dart boards and an upstairs mezzanine for private events.

Still serving lunch, happy hour, dinner and late night food, the menu from head chef Michael Budzilowicz will now include pizzas and flatbreads along with gluten free, vegetarian, keto and other options. Classic items from the current menu, including the Cav's Burger and the Guinness braised brisket grilled cheese, will carry over to the new spot.

Anderson called the move "bittersweet," but said Cavanaugh's looks forward to opening its doors to the public.

"We can't wait to show everyone the work we have put in to create the same welcoming atmosphere and familiar signature elements with a new space and some amazing upgrades," Anderson said.