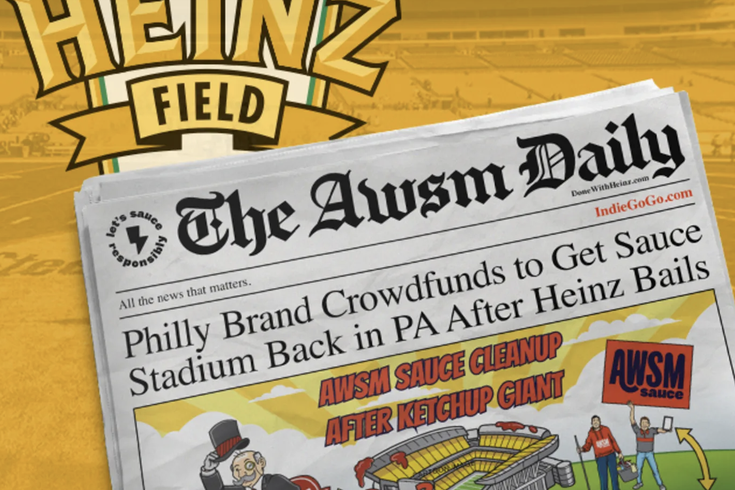 AWSM Sauce is a sustainable ketchup and sauce brand founded last year in the Philadelphia area by aul Lehmann and Carl Starkey. They're trying to crowdfund $57 million to pursue a stadium naming rights deal after rival Heinz dropped its sponsorship with the Pittsburgh Steelers.

Last year, two dads in the Philadelphia region put their minds together to dream up AWSM Sauce, an eco-conscious condiment company that strives to take a bite out the nation's annual 60 billion-pound plastic waste problem.

Their ketchup, made by mixing powder with water, is starting to generate buzz as a disruptive newcomer in a $130 billion sauce industry that's heavily reliant upon single-use plastics.

Paul Lehmann and Carl Starkey brought their product to market earlier this year, pitching it as a sauce alternative that abandons plastic containers in favor of a reusable, at-home approach. Rather than packaging a pre-mixed sauce with water during the production process, the company sends AWSM Sauce customers flavored powder packets that come with simple instructions to make condiments with just the right consistency.

"It's incredible how easy it mixes up. In thirty seconds, you have delicious ketchup," Lehmann said. "It truly has taken a condiment industry that's pretty sleepy and hasn't had much innovation in the last 50-100 years, and it's totally revolutionized the way someone can purchase and consume their various sauces."

Keeping water out of the production process not only reduces AWSM Sauce's environmental burden, but it also cuts down the company's shipping costs.

"There's a lot of movement (going on) in this sustainable world, like removing water from shipping and removing single-use plastics," Starkey said. "You might think of water bottles and cleaning products, but no one really looks at an industry like sauce."

The co-founders of AWSM Sauce are both former coaches at West Chester's Westtown School, where Lehmann was co-director of athletics and Starkey led the lacrosse team.

Initially working out of Lehmann's garage, the AWSM Sauce duo raised $750,000 in pre-seed funding from friends, family and angel investors. In November, they landed with an accelerator called TechStars, which is run by baseball's Minnesota Twins. AWSM sauce is now being used at the team's Target Field in Minneapolis, where fans get their ketchup from AWSM-branded pump dispensers.

This May, Lehmann and Starkey even made an appearance on "Billion Dollar Idea," the Fox Business show hosted by entrepreneur Ben Weiss, who created Bai Brands beverages.

AWSM Sauce is keeping a lean profile during its early stages, focusing on direct-to-consumer and business-to-business sales. They've got an office in Newtown Square, in Delaware County, and a manufacturing partner in Bucks County.

But the company is beginning to think much bigger in its quest to connect with new customers, both in terms of brand identity and values.

Lately, Lehmann and Starkey have had their sights set on Pittsburgh's corporate kings at Heinz. This month, the ketchup giant dropped its stadium naming rights deal with the Steelers, leaving Pennsylvania without a sauce sponsor at a sporting venue.

The Steelers' home field will now be called Acrisure Stadium, after the global insurance broker. The company paid an undisclosed sum to secure the naming rights for 15 years.

The problem is, Steelers fans hate the new name so much that they've collected more than 8,800 signatures on a Change.org petition to get rid of it. Their effort will almost certainly be futile, but you can't say they didn't try.

The same goes for AWSM Sauce, which this week launched a crowdfunding campaign on Indiegogo to raise $57 million for its own stadium sponsorship.

That absurd number is meant to mock Heinz and its iconic 57 varieties — a marketing fib that's never been an accurate count of the company's products.

“We heard that Steelers fans are upset with the name change, so we thought, why not have a Philly Sauce brand step in and help keep Pennsylvania the sauce capital of the world?” Starkey says on the Indiegogo campaign page.

Deep down, Starkey and Lehmann may harbor a fantasy that they'll get $57 million in backing from their campaign. Regardless, they consider it a good strategy with an actual commitment tied to it. Proceeds from the campaign will, in fact, support an athletics venue of some kind in the Philadelphia region.

"Whether it's $5,000, or $50,000, or $57 million, it would be really cool to have that money go toward a little league park in the area that could use it and would be excited to call AWSM Sauce Stadium their home," Lehmann said. "There's something fun that exists beyond the pie-in-the-sky and going after the big boys."

"The biggest element of it is the tongue-in-cheek side of this, really to raise awareness that in Pennsylvania, this sauce giant left," Starkey added. "We want to raise our hand and say, 'Hey, we're here and we're willing to jump in and put our name on a stadium."

In a larger sense, AWSM Sauce views the campaign as a way to highlight the potential for change in its industry.

"Heinz ketchup alone, in one year, in one product, they produced one billion single-use plastic bottles," Starkey said.

More than 120 million gallons of water were shipped globally in 2020 to support Heinz's ketchup production. That's just one company with one of many products built on single-use plastics, the vast majority of which are not recycled.

"Our goal, right out of the gate, was to go after the largest producer of plastic in the sauce industry," Starkey said. 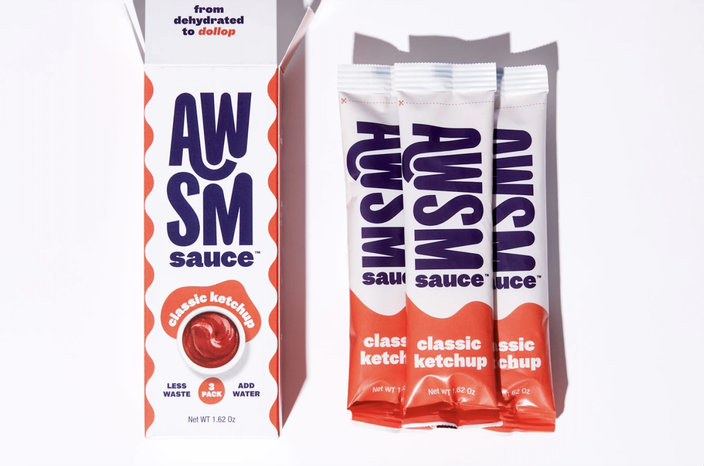 AWSM Sauce is sold in packets of powder that customers mix with water to create ketchup and other flavored sauces.

The beauty of AWSM Sauce lies in the company's at-home approach to condiments. Customers order packets of flavored powder along with an optional, reusable glass jar for an additional cost. When mixed with the recommended amount of water — one-third of a cup per powder packet — the sauce comes to life with a hearty shake.

"It doesn't have to be water. It could be whisky, if you like," Starkey quipped.

So far, Lehmann and Starkey have developed three flavors — Classic Ketchup, Chesapeake Fire Sauce and Honey Hickory BBQ. The powders are sold in $6 packs of three that yield a combined 3.5 fluid ounces when mixed together. The powder itself has a two-year shelf life. Once it's reconstituted with water, the product follows the restaurant-industry standard of eight weeks.

"The truth of the matter is it's a vinegar-based sauce, so it'll last as long as you want," Starkey said.

The company enlisted the help of food scientists to aid in the research and development phase, but the experimental spirit of AWSM Sauce comes from Lehmann and Starkey's love of getting creative in the kitchen.

"It's backed by 20 years of grilling, sauce-making, spice-rubbing culinary expertise — perfected at my house," Lehmann said.

In August, alongside the Indiegogo campaign, AWSM Sauce will embark on a second round of pre-seed funding to raise another $850,000, which will be used to help the company scale its digital platforms. Lehmann and Starkey hope this will drive revenue in advance of a $2 million equity round in Fall 2023.

"As we start out and we're as lean as possible, going direct-to-consumer makes the most sense," Starkey said of the company's business model. "What we'd love to do is start working more with Philadelphia restaurants and get it into our area, which then would start driving more volume."

Eventually, AWSM Sauce aims to be stocked at grocery stores or other non-traditional retailers that cary niche products.

"It's more a question of timing," Starkey said. "When is the market ready for it? When have we created enough consumer demand that we could go to a grocery shelf and be confident that we're going to hit the volume that they're seeking and make it make sense financially?"

For now, the company hopes to expand its footprint in the Philadelphia region and become a recognized brand. That's partly what's driving the competition with Heinz. Backers of the campaign will get free samples based on how much they contribute. Those who put in $10,000 will get a lifetime supply of AWSM Sauce.

"Philly's such an underdog city, so when you have a scrappy startup like AWSM Sauce going after a giant like Heinz and starting to poke the bear, you can see Philly getting behind it," Lehmann said. "That's the fun of it, seeing if there's a rally behind it."

"Wherever this campaign goes, we are really excited to make an impact in Philadelphia. We're committed to finding a stadium that makes a meaningful impact on our company," Starkey said. "It would be meaningful to us as coaches and business owners."

And if they do get $57 million, they might just make a run at the newly proposed Sixers stadium in Center City.