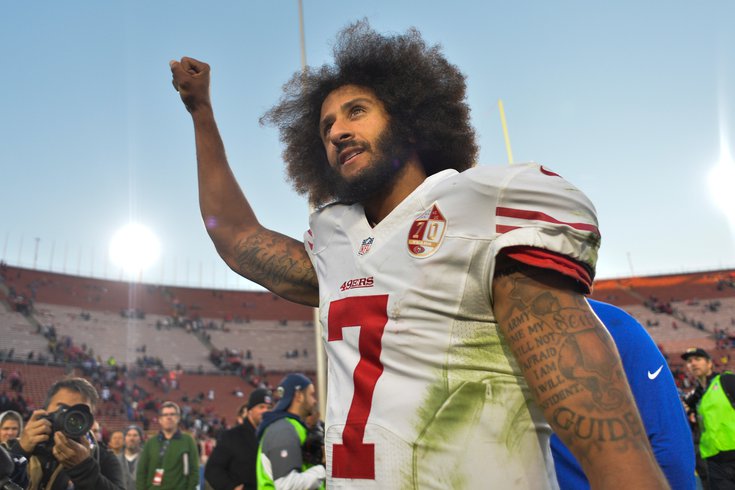 Ask yourself why the NFL is being mentioned by Rev. Al Sharpton at George Floyd’s funeral?

Perhaps, the answer is a Faustian bargain for the league’s popularity.

If European folklore isn’t your thing, the legend is that Faust sold his soul to Mephistopheles for unlimited knowledge and worldly pleasures — the so-called deal with the devil.

The NFL, meanwhile, is so popular in this country that it’s often used by others to attract attention. A nasty unintended consequence to relevancy.

Tying Colin Kaepernick, the league, and the tragedy that befell Floyd, which set off a powder keg around the country when it comes to acts of alleged police brutality, is not exactly the shortest distance between two points but you can get to the destination as long as Waze is helping you avoid all the detours.

Kaepernick, after all, did protest the issue and his absence from the league is directly related to the 32 owners — most of them conservative-leaning from a political standpoint — weighing the cost-benefit analysis with him and deciding the controversy of bringing the veteran quarterback in was just not worth the trouble.

If you doubt that explanation because you’ve consumed disingenuous reporting in recent years, take a look at Joe Lockhart’s recent op-ed for CNN.

Best known for being the White House Press Secretary for two years during the Bill Clinton administration and the chief of the NFL's messaging for nearly two years before leaving the job after Super Bowl LII, Lockhart always looked like a great fit for the NFL wanted — a "progressive" ideologue with experience handling the toughest issues imaginable for what has tried to be a progressive league but one which has been painted as anything but, most notably due to the perceived “blackballing” of Kaepernick.

In theory, Lockhart should have earned his stripes in D.C. with a certain segment of the media but most modern football writers don't exactly pay attention to the day-to-day grind inside the Beltway unless it concerns Daniel Snyder and the mess he has made of the Redskins.

To them, Lockhart was just the latest mouthpiece for a league ‘that believes domestic violence isn't quite as bad as smoking weed’ and is actively banning a ‘talented player for his activism.’ His CV simply didn't exist to those searching to check the box of confirmation bias.

Try explaining a collective bargaining agreement that had clear and structured penalties for substance abuse versus nebulous ones for personal-conduct issues. Try explaining why Malcolm Jenkins is doing just fine in the same league despite being a far busier activist than Kaepernick ever will be.

The headlines across the country when it came to aggregating Lockart’s op-ed buried the lede because it didn’t advance the right narrative, at least for many.

“I was wrong. I think the teams were wrong for not signing him. Watching what's going on in Minnesota, I understand how badly wrong we were," Lockhart wrote in the part of the editorial that was pushed out like an admittance.

Problem is the context did exist for those who actually took the time to read the piece.

“Kaepernick was not blocked because the league wanted to punish him for setting off the protests,” Lockhart wrote. “In fact, just the opposite is true. The commissioner and several other league executives spent a lot of effort prodding and pushing owners to sign him.”

Back in September of 2017 Jeffrey Lurie explained things in a similar fashion when this reporter asked the Eagles owner what he’d say to fans who believe Kaepernick has been blackballed by his league.

"I think the definition of being 'blacklisted' is some discussion among some people to not hire, not approve, or something like that," Lurie said at the time. "I've never had a discussion with anybody. It doesn't work that way. There's no communication whatsoever. We're very competitive against each other, 32 owners."

From there one of the league’s most progressive owners told people the truth even though many didn’t want to hear it.

The moral of this story is that while Roger Goodell may have a little more cachet than Nancy Peloisi or Mitch McConnell with many in this country, when it comes to the mechanism of power, the latter are the ones very meaningful in any discussions when it comes to de-escalating an ever-growing polarization in the country in regard to the police.

Even in his own industry, Goodell is only slightly more meaningful than any other know-it-all on Twitter with a blue checkmark, albeit a more financially stable one with a seat at the table. The NFL’s commissioner’s job description should read “lightning rod,” the guy who takes the heat his bosses don’t want.

He and the NFL have literally nothing to do with police brutality in this country and “assigning” Kaepernick to one of the NFL’s 32 teams would accomplish little in trying to stop it.

Go ahead and play it out in your head with Goodell creating a new precedent approved by his bosses to order one of them running a team you believe has a less-worthy backup quarterback to sign Kaepernick, presumably with a salary-cap exemption to justify overpaying.

In that hypothetical what’s accomplished in the fight against police brutality? Is the PD in that made-up city where Kap lands defunded? Is money shifted in an effort to demilitarize police to more acceptable causes that pass your personal litmus test? Is a Camden-like plan to bust the union and hire more police bodies under a new name tacked on to the end of the legislation from Park Avenue?

Of course not. So ask yourself, is this about feelings or action? Placating or progress?

To be fair, symbolic gestures can have real effects, but those are generally intangible and that would be the case here. It would bolster the movement from a public relations standpoint and make a multitude of NFL players a bit happier, but we are talking about emotions there, long the enemy of logic.

The serious-minded with an eye on the prize don’t care about the NFL or Kaepernick when it comes to fighting the power of police unions across the country which protect the bad apples through collective bargaining.

From there you can get in the weeds and argue the statistical significance of what this fight is about but science is often forgotten when that emotion is added to any equation. That is best evidenced by the hypocrisy of those shaming beachgoers for putting grandma at risk before pivoting with the deftness of Allen Iverson in the open court when crowds are required for what they want.

Society stinks right now and the NFL has little to do with that.

The back end of those Faustian bargains, however, always come with quite the balloon payment.

And now, some highlights from the week...


Make sure you follow the JAKIB Media Partners YouTube page for your daily dose of “Extending the Play,” the Eagles podcast that became an institution in South Jersey as the No. 1 local drive time segment in the market.

The latest position discussed might be the best with Zach Ertz and Dallas Goedert at tight end:


Meanwhile, another episode examined the NFL’s COVID-19 rules that must be met before Eagles players can return to the NovaCare Complex:


The Football 24/7 Network also visited with Tony Bruno and Harry Mayes on both SIRIUS AM’s Dan Patrick Radio and SBNation Radio this week to discuss the NFL’s plans to reopen facilities to players and even our favorite Looney Tunes characters. The correct answer, of course, being Foghorn Leghorn.


MORE: McMullen: As our nation burns, it's impossible to 'stick to sports'