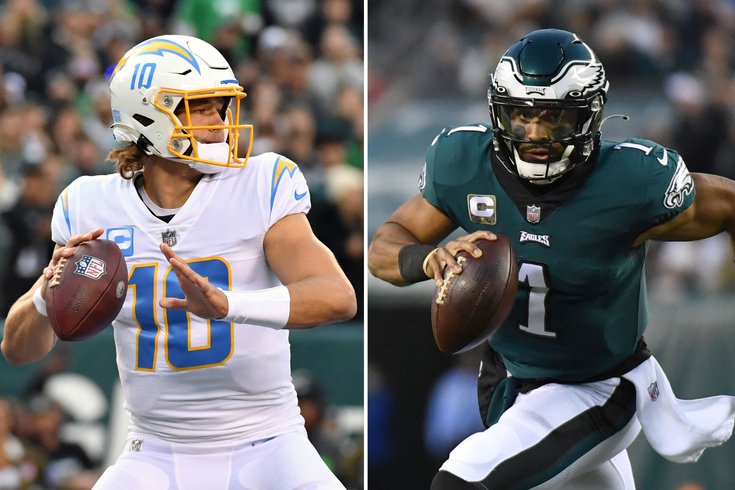 You saw Jalen Hurts at his best during a 27-24 loss to the Los Angeles Chargers on Sunday.

Down 24-17 to a more talented team, the Eagles’ second-year quarterback put his team on his back during a 10-play, 78-yard drive that showcased all of Hurts’ dual-threat abilities, featuring two 3rd-and-four scrambles, one of an acrobatic variety, and a 28-yard touchdown pass to DeVonta Smith to keep Philadelphia’s hopes alive.

Right up until Justin Herbert stepped back on the field to put the punctuation on a virtuoso performance.

The march to deadlock the game was arguably the Eagles’ most impressive drive over the 540 minutes of football Nick Sirianni’s team has played this season and Hurts was masterful.

Staley came in with the reputation as a defensive mastermind, the so-called Sean McVay of that side of the football, and he threw the kitchen sink at Hurts.

“He started coming with different things,” Sirianni said of Staley. “I think they had a blitz zero on him the last play. Jalen ended up, we all saw that, ended up getting to a play and Jalen ended up doing great communication to tell everybody what the play was and just fired a strike to DeVonta.”

For Sirianni, though, the biggest checkmark of all was something that Hurts has shown through the entirety of the team’s 3-6 start, no matter the obstacle, the moment is never too big for the former Heisman Trophy runner-up.

“He just was really unfazed by the scenario and just showed a lot of poise,” the coach explained. “Down seven everything in his eyes said put it on me and let's go, let's keep running the ball, let's keep play-action it, make sure we are converting on third down.

“And he made some unbelievable plays on third down. That play where he jumped over top and did the flip, I think if we had won that game that would be a play they showed over Philly for a long time. He just was really composed in a tight situation. That's what you want out of your quarterbacks. That's what I've seen out of good quarterbacks in my past.”

Everything Sirianni said was true and yet you looked over at the other side of the field and saw the lengthy Herbert and knew that it was just not going to be good enough.

No matter how much Hurts perseveres, no matter how many intangibles he brings to the table, he’s never going to be the type of quarterback that can slice and dice a defense to the tune of 32-for-38 for 356 yards and a 123.2 passer rating.

On first view, I counted one poor pass from Herbert on the afternoon, a hurried quick out to an open Jalen Guyton.

That’s not to say a Jalen Hurts-led team can’t beat a Herbert-piloted team in the future. It just means when the latter brings his A-game, the margin of error for beating him is thimble-sized.

And the Eagles nearly pulled it off Sunday with a couple of key fourth-down stops early and some Hurts’ heroics late, the type of game-changers that are going to beat average quarterbacks.

Not against Herbert, however. The Oregon product’s mere presence in South Philadelphia highlighted what the Eagles don’t have in their own QB.

“I think you hit it. 32-for-38 in a pro game – that’s really, really good,” Staley assessed. “But what I liked about it is we got to the deep part of the field today and we were able to access all parts of the field in a lot of different ways.”

And on Sunday, that was just more than the Eagles could handle.

John McMullen is a contributor to PhillyVoice.com, and covers the Eagles and the NFL for Sports Illustrated and JAKIB Media. He’s also the co-host of “Birds 365,” a daily streaming show covering the Eagles and the NFL, and the host of “Extending the Play” on AM1490 in South Jersey. You can reach him at jmcmullen44@gmail.com.