John McMullen: Nick Sirianni is walking a tightrope this offseason 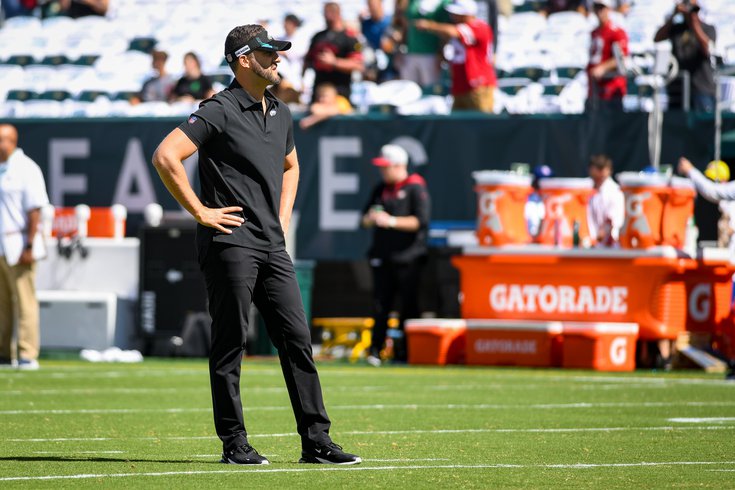 The Eagles' spring was light when it came to on-field work and Nick Sirianni was asked more than once to explain the delicate balancing act he has to perform when it comes to player safety vs. substantive preparation.

As difficult as it will be to close the gap between his team and Dallas, never mind the LA Rams, Tampa Bay, and Green Bay in the NFC, the real trick for the Eagles' coach has been keeping himself on an even keel for what is an organizational decision to leave meat on the bone when it comes to practice time.

NFL reporters will tell you that we've yet to meet the coach who doesn't want to practice and Sirianni isn't the outlier to that sentiment. And yet his team essentially left over 50 percent of available grass time on the table in an already scaled-back environment due to collective bargaining.

It’s curious, to say the least, and it makes you start to wonder if there is any value to the spring version of NFL football, at least in the minds of the Philadelphia brass.

The cost-benefit analysis around the NFL, according to a former head coach, boils down to the thought you can't prepare like you want anyway, so why not get to Week 1 as healthy as possible?

The Eagles have taken that theory and run with it to a greater degree than anyone else to date.

"It's always about the players' health," Sirianni said last week.

The tricky part is figuring out whether this is dictated from above Sirianni’s pay grade and whether the coach is completely on board with what's being advised.

The truth lies where it usually does when given the option of extremes – somewhere in the middle.

Sirianni wants to practice but he also turns 41 on Wednesday and is a forward-thinking younger mentor who understands success in modern coaching often boils down to getting the maximum out of the setup you’re given.

In other words, it’s fine to wax nostalgic about two-a-days but the minute you’re not visualizing ways to stay ahead of the pack, you’ve already started falling behind.

“I didn't go to school for that. I went to school to be an education major, but I was really preparing to be a football coach. That's what my coach was preparing me to do."

Sirianni is also where he is in his career, a second-year head coach who doesn't have the same cachet as a Bill Belichick or Andy Reid.

Although Sirianni is a good soldier, it's hard to imagine the young coach playing quite as well with others when the resume gets a little larger and his power grows.

If you pluck Eagles chief medical officer Arsh Dhanota, who is considered a star by the most important people in the NovaCare Complex, and place him down in New England or Kansas City the doctor would likely offer the same advice but get a different result.

We are now officially out of Howie Roseman season and back to Sirianni SZN so it's the coach who has to walk the tightrope when it comes to being the face and voice of the organization.

To his credit, Sirianni has come a long way from his opening press conference and is now comfortable in his own skin and capable of spinning things toward his strengths as a coach: the forward-thinking mentor who utilizes what's allowed in the best way possible.

Sirianni looked at the limitations of his schedule and attempted to maximize his time by stressing technique and fundamentals.

"As we looked at all the different years that we've had, even when I go back to my days as a coordinator with the Colts, even when it was 11-on-11, it was a passing drill," Sirianni explained. "What happens there sometimes is you get these big dudes out there and you're like, all right, we're not going real hard.

“... good luck telling Jason Kelce we're not going real hard or Fletcher Cox or any of those guys. So, we just took them out of it and we were able to go full speed [in 7-on-7s]."

To Sirianni's point, it's hard to practice physicality when you're not permitted to be physical by rule so the Eagles have re-imagined spring work.

"When you have a [practice] where you have five or six periods of team periods, well, naturally your individual period time is going to shrink," Sirianni said. “We were able to have 35 minutes [last Wednesday] of individual time of perfecting our fundamentals.”

When the margin between winning and losing is as razor-thin as it can be in the NFL, sound technique is often the difference.

Well, what gives in a scenario like that?" Sirianni asked rhetorically before answering "fundamentals."

"We've had these long periods of individual [work] where we're perfecting our fundamentals,” the coach continued. “You go fundamentals, then you work it into team [periods] and then you go here. So great, the offseason program we had a ton of fundamentals work, which is going to put us in a position to have more team periods when we get into training camp."

Player development is real in the NFL and teaching the fundamentals is where the coaching staff comes into the equation.

Behind butting heads over autonomy, the move away from Doug Pederson from the Eagles’ perspective had to do with “coaching the coaching staff,” something the organization feels is a strength of Sirianni.

“We can take a player to a different level that they can't reach on their own."

John McMullen is a contributor to PhillyVoice.com and covers the Eagles and the NFL for Sports Illustrated and JAKIB Sports. He’s also the co-host of “Birds 365,” a daily streaming show covering the Eagles and the NFL, and the host of “Extending the Play” on AM1490 in South Jersey. You can reach him at jmcmullen44@gmail.com. Follow John on Twitter.