On 'Late Night with Seth Meyers,' the stand-up talked about his drug addiction and the intervention that led him to rehab 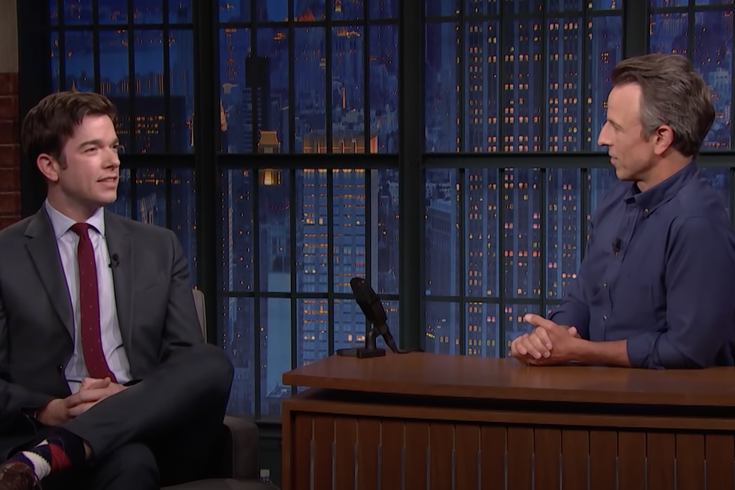 John Mulaney appeared this week on 'Late Night with Seth Meyers' and revealed that he and actress Olivia Munn are having a baby together. Mulaney also talked about his battle with drug addiction.

An eventful year for comedian John Mulaney just took another sharp turn with an announcement recently that he and actress Olivia Munn are expecting a baby together.

Mulaney, 39, revealed the big news during an appearance on Tuesday's episode of "Late Night with Seth Meyers," where the stand-up explained that his relationship with Munn deepened after he spent a few months in rehab for cocaine and alcohol addiction last winter. Mulaney finalized his divorce with his wife of six years, Annamarie Tendler, in July.

"I got into this relationship that's been really beautiful with someone incredible who has dealt with the non-coked up, Bambi version of me," Mulaney said. "And that's been very incredible and she's kind of held my hand through that hell. And we're having a baby together."

Munn, 41, first met Mulaney at Meyers' wedding with Alexi Ashe in 2013. The two reconnected in May, just months after Mulaney completed rehab at a facility in Pennsylvania.

"She got to date me right out of recovery, which is what they call a reverse catch," Mulaney told Meyers.

Munn's fans had speculated in recent days that she might be pregnant after spotting a bump in photos the "X-Men" and "Newsroom" actress shared on Instagram. Munn has not yet commented publicly about her pregnancy. In the past, Munn was notably in a relationship with Green Bay Packers quarterback Aaron Rodgers.

If Olivia Munn is pregnant with John Mulaney’s child we have to call it on 2021 like we can’t take any more news of any kind https://t.co/WRdVhDRhIm

The pregnancy announcement prompted some fan backlash on Twitter over the couple's accelerated relationship arc prior to the comedian's divorce from Tendler. Mulaney also previously said, while married to Tendler in 2019, that he didn't want to have children.

Mulaney is scheduled for 12 performances in Philadelphia at the Kimmel Cultural Campus next month from Oct. 1-12.

During his late night appearance, Mulaney told Meyers that his drug addiction was severe prior to going into rehab. The comedian had been sober for years after struggling with alcohol and cocaine in his 20s, but he relapsed during the first year of the coronavirus pandemic. He had briefly been working as a writer on Meyers' show before entering rehab, which was prompted by an intervention that Meyers attended.

Mulaney returned to the stage earlier this year in New York City and has been touring since.

Months removed from a dark spiral, Mulaney shared his gratitude for the help he received from Meyers and others who participated in steering him toward help.

"I walk into the intervention and (I was) so mad," Mulaney said. "I didn't want an intervention. I wanted to continue — at that moment in time — I wanted to continue using drugs. Sitting here tonight, I'm so grateful to you and to everyone there for saving my life. That night, I was not grateful. And yet, as mad as I was, I looked around at the group and I was like, 'This is a good group. It was like a 'We Are the World' of alternative comedians over the age of 40. It was like so many funny people — and then no one did bits the entire time."