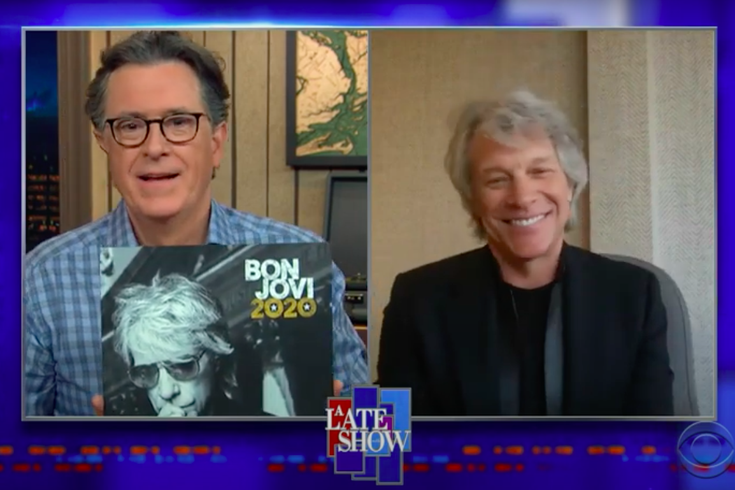 Stephen Colbert shows off Jon Bon Jovi's new album, '2020,' during an interview the rock star gave on 'The Late Show.'

Jon Bon Jovi detailed the way the year's events – both personal and political – shaped his latest album during an appearance Monday on the "Late Night Show with Stephen Colbert."

"OK, that's a bold name for an album," Colbert said during the interview. "Every minute of 2020 is like a whole new year."

The title initially began as a "tongue-in-cheek" reference to an election year, Bon Jovi said. But it took on another meaning as the year went on.

Though work on the album began in 2019, Bon Jovi said it wasn't completed until he wrote additional songs inspired by the events of this tumultuous year.

"In March of '19 we went to Nashville to record what I thought was the album," Bon Jovi said. "In retrospect it was really just the first batch of songs."

The 58-year-old said some songs, like "American Reckoning," were written in direct response to the Black Lives Matter Movement that gained traction in the wake of the police killing of George Floyd.

Other tracks, like "Do What You Can," were directly inspired by the singer's charity work. Bon Jovi performed the song later on Monday's show.

He said the song's title came to him while volunteering with his charity organization, the Jon Bon Jovi Soul Foundation, during the early months of the coronavirus pandemic. In a call to action to those who lost their jobs, Bon Jovi advised, "If you can't do what you do, do what you can."

But the singer's volunteer work didn't always go so smoothly. Bon Jovi joked about dropping a 40-pound container of soup onto his fingernail while working at his foundation's soup kitchen.

"There are certain things that lead singers aren't meant to do, and manual labor is pretty high on that list," Bon Jovi said while showing off a blackened fingernail.

Bon Jovi founded his band in Sayreville in 1984. The singer was born in Perth Amboy and also started a band called Atlantic City Expressway.

An extended version of Bon Jovi's new album "2020" was released Tuesday. Stream the album below.