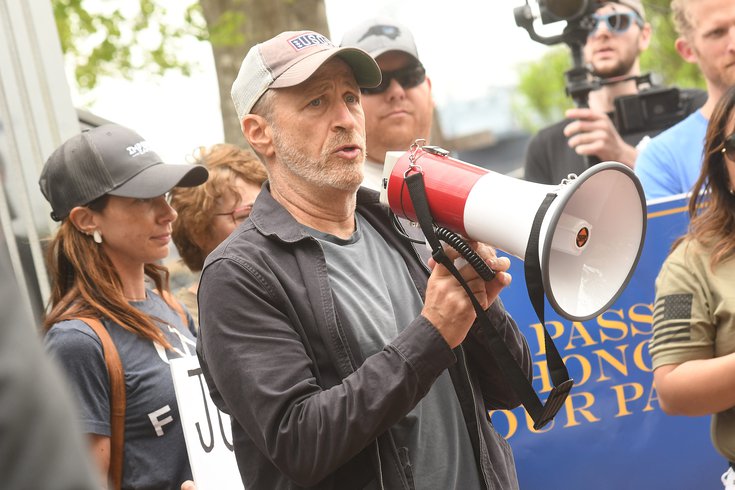 Pennsylvania's U.S. Sen. Pat Toomey was singled out by activist and comedian Jon Stewart for holding up legislation that would make it easier for veterans who were exposed to toxic chemicals to get medical care.

Pennsylvania's U.S. Sen. Pat Toomey was singled out by activist and comedian Jon Stewart for holding up legislation that would make it easier for veterans who were exposed to toxic chemicals to get medical care.

He's not the only senator Stewart mentioned in his fiery, profanity-laden speech in front of the U.S. Capitol on Thursday, but the former late night host did call out Toomey repeatedly and more than anyone else.

Toomey said he's taking a principled stance against excessive spending in the face of rising inflation and that he supports the elements of the bill that would make it easier for these vets to get the help they need.

The comedian labeled Toomey a "coward" for refusing to meet with veterans who came to demonstrate in support of the bill and sending his chief of staff to receive them instead.

He also criticized the senator and other Republicans for throwing their full weight behind other defense spending unrelated to veteran healthcare.

The PACT Act would ax a rule that requires veterans to prove their illness was caused by toxic exposures to receive medical aid from the Department of Veterans Affairs. That's expected to cost $280 billion over a decade.

It would be a boon to veterans exposed to agent orange during the Vietnam War and those who worked near toxic burn pits in Iraq.

The bill was passed by the Senate last month with an 84-15 vote, but Toomey and 24 other Republicans changed course on Wednesday to vote against a measure that would end debate on the bill. This means it's unlikely it will be passed before the body's month-long August recess.

Toomey said he doesn't support the $400 billion legislation as it currently exists because there's too much money included for causes unrelated to veterans.

"The PACT Act could have passed weeks ago if Democrats had dropped the spending boondoggle," he said in a Twitter thread. "Since they can’t bring themselves to abandon yet another needless, inflationary spending spree, here’s an idea: let the Senate vote on it."

Apparently some of our Democratic colleagues care more about their $400 B future spending spree on matters completely unrelated to veterans—facilitated by what they snuck into the veterans burn pit legislation—than the programs and funding for veterans exposed to toxic chemicals.

The senator, who plans to retire at the end of his term in November, has been more aligned with Stewart and others on the left than most of his GOP counterparts in recent years.

He was one of seven Republican senators who voted to convict former President Donald Trump on sedition charges in his second impeachment trial following the Jan. 6 insurrection.

Toomey also cast a critical vote in favor of a bill that strengthened federal gun laws for the first time in more than three decades last month in the wake of the Uvalde, Texas, shooting.

In the race for Toomey's replacement, Pennsylvania's Democrat Lt. Gov. John Fetterman is facing off against Republican TV doctor and surgeon Mehmet Oz.