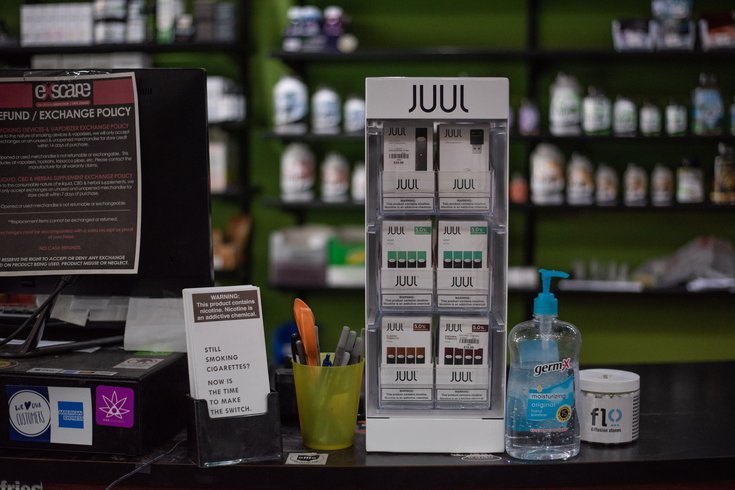 The U.S. Food and Drug Administration ordered Juul to remove its e-cigarette products from the market. The company has been blamed for fueling the youth vaping epidemic. Above, Juul products on display in Rochester, New York in 2019.

The safety of Juul e-cigarettes has been questioned since the youth vaping epidemic became evident in the United States. Now, the Food and Drug Administration has ordered Juul Labs Inc. to take them off the market.

Juul can no longer sell or distribute the Juul device and its tobacco- and menthol-flavored pods, the FDA announced Thursday. Retailers must remove the products currently on the market and the products cannot be imported. The FDA orders do not restrict consumer possession or use.

"Today's action is further progress on the FDA's commitment to ensuring that all e-cigarette and electronic nicotine delivery system products currently being marketed to consumers meet our public health standards," FDA Commissioner Dr. Robert M. Califf said. "The agency has dedicated significant resources to review products from the companies that account for most of the U.S. market. We recognize these make up a significant part of the available products and many have played a disproportionate role in the rise of youth vaping."

The news comes two days after the FDA revealed plans to set a maximum nicotine level in cigarettes and other tobacco products, an attempt to reduce addiction among young people.

On Wednesday, the Wall Street Journal broke the news that the FDA was poised to order Juul products be removed from the market.

Earlier this summer, the FDA authorized certain tobacco-flavored e-cigarettes from Reynolds American Inc. and NJOY Holdings Inc. to remain on the market. Industry sources told the newspaper that they had expected Juul Labs to receive similar treatment.

E-cigarettes have been the most commonly used tobacco product among youth since 2014, according to the U.S. Centers for Disease Control and Prevention. Last year, 11.3% of high school students reported they had used e-cigarettes within the last 30 days.

The popularity of e-cigarettes threatens to wipe out public health gains made in cigarette use, public health officials fear. Research suggests children who vape are three times more likely to smoke regular cigarettes as adults.

Juul has been blamed for the troubling spike in youth vaping. Numerous lawsuits filed by state and local governments – including Pennsylvania and Philadelphia – have accused Juul of illegally marking its products toward youth. And in 2019, the FDA took issue with the company claiming its products were safer than cigarettes.

In 2020, the FDA banned most fruit- and mint-flavored e-cigarette products, which were popularized by Juul while also requiring e-cigarette manufacturers submit their products for FDA review. The FDA has spent nearly two years reviewing data presented by Juul Labs, which has requested that it be permitted to continue selling its tobacco- and menthol-flavored products in the U.S.

The FDA said Juul's applications included "insufficient and conflicting data" regarding potentially harmful chemicals leaching from the pods and genotoxins – substances that can damage DNA. This prevented the FDA from completing a full toxicological risk assessment of the Juul's products.

The FDA said it has not received clinical information suggesting "an immediate hazard" associated with the use of the Juul device or pods. But it said "there is insufficient evidence to assess the potential toxicological risks of using the Juul products."

Juul can appeal the FDA order or challenge the decision in court. It also can submit a revised application for its products.

After launching its products in 2015, Juul received criticism from regulators, school administrators and parents for using young models in its advertisements and for selling sweet and fruit-flavored products that found popularity among young people.

The company has said it never deliberately targeted children and voluntarily removed its flavored products from the market, with the exception of its tobacco- and menthol-flavored ones.

Since the sale of the sweet and fruity e-cigarette refill cartridges have been barred and the legal purchase age for tobacco products was raised to 21, underage vaping in the U.S. has been on the decline. The proportion of high school students who vaped fell to 19.6% in 2020, down from 27.5% in 2019.

This story was updated Thursday, June 23 after the FDA formally ordered Juul to remove its products from the U.S. market. The initial version, published Wednesday, June 22, noted that the FDA reportedly was poised to do so.