With baby on the way, it's goodbye Tito's, hello mocktails! 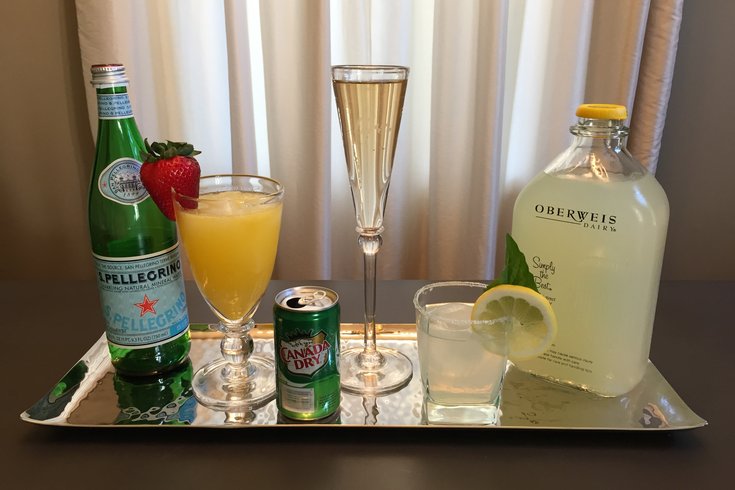 Katie's go-to mocktails during pregnancy include frozen fruit drinks with berry garnish, basil lemonade in a lowball glass and ginger ale in a Champagne flute. She recommends cutting sweet drinks and juice with sparkling water for added bubbles and less sugar.

Ryan and I planned to start trying for a baby in the new year, so I decided to stop drinking on Jan. 1. When I found out two weeks into 2016 that we conceived on Dec. 28, I realized that my baby and I were swimming in Tito’s Vodka on New Year’s Eve. And then sweating off our hangovers in the steam room of a spa on New Year’s Day. Mother of the Year nominations can commence.

By my estimation, this is the longest I’ve gone without having an alcoholic drink since I was 17 years old. But giving up alcohol wasn’t difficult for me, despite my deep affinity for it. Before I knew I was pregnant, I was simply focused on being my healthiest self for conception. In the first trimester, I was so exhausted that I didn’t think about drinking. Now in the second trimester, there have been a few occasions when I think about my old best friend Tito. Or a Manhattan. Or an ice-cold Yuengling. But the hardest part has been remembering how to participate in social settings without drinking.

The first time was when my husband and I were hanging poolside at the Arizona Biltmore Hotel in Phoenix. It was one of those beautiful, sunny days where the rum was flowing like the waterslide. I found myself gazing longingly at Ryan’s mojito. But I ordered a virgin piña colada and french fries instead and was perfectly satisfied.

As Memorial Day weekend approaches and I anticipate my favorite season in Longport, New Jersey, I think about what summer will be like without alcohol. Many of my favorite memories down the shore involve a cold beer late afternoon on the beach, sharing a glass of wine with my Aunt Joanne on her porch or having a pineapple vodka at Steve & Cookie’s with my mom. While the beverages will be different this summer, I know that my favorite companions, my family and the ocean, will remain constant.

If you enjoy drinking as much as I do, it’s normal to miss it when you’re expecting. I recommend trying some new, non-alcoholic beverages during this special time. When Ryan and I go out to a nice restaurant, I ask the bartender to make me a mocktail. When friends are drinking beer on a Saturday afternoon, I go for a lemonade or Pellegrino. In the beginning of my pregnancy, I was drinking ginger ale and Shirley Temples, even though I’m not usually a soda drinker. Substituting new drinks for my old, boozy favorites has helped me forget about those moments of longing.

I know many women who have an occasional drink during pregnancy with no effect on their children, but I’m not going to be one of them. I’m not passing judgment; I’m just following my instinct and my doctor’s advice. I have a miracle growing inside me that I fiercely want to care for and protect. If I even had a sip of alcohol at this point I would be wracked with worry and guilt; I’m neurotic like that. Besides, I’ve had plenty of alcohol in my 34 years and, ultimately, I’ll have plenty more once we welcome our baby in September.

Sometimes, I smell Ryan’s bourbon and think about what my first drink will be once I’ve given birth: Tito’s and water with some fresh-squeezed lemon. I can almost taste it. Until then, just throw some extra cherries in my Shirley Temple.

And, yes, I’d like to see the dessert menu.