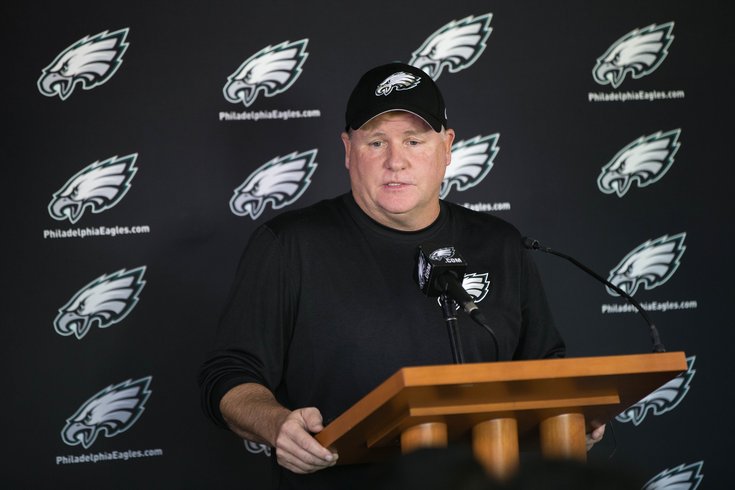 Despite a front office overhaul, it's been almost two full months since Chip Kelly was behind a microphone answering questions.

The smiling face of Jeff Lurie flashed up on the Wells Fargo Center video board three years ago, followed almost instantly by a flood of boos from the Sixers fans. The Eagles owner, who had no idea anyone would even notice him in the crowd that night, was shocked by the venomous reaction. He vowed change.

A few months later, the person Lurie blamed for his negative image, team president Joe Banner, was gone. Eagles fans hated Banner because of his snarky tone, his twisted logic and especially his unwillingness to address their criticism regularly and with respect. For Lurie, it was guilt by association.

The owner was so determined to remake his image – and that of his team’s – that he even implored then-coach Andy Reid to stop providing robotic answers to fair questions. Lurie wanted the acceptance he felt he deserved after so many winning seasons. He wanted a fan-friendly team. He wanted to be liked.

It is hardly a secret that the problem right now is Kelly, a coach whose role model is the biggest grump in sports, New England coach Bill Belichick.

For a while, the initiative worked. The new president, Don Smolenski, was accessible, fair-minded and ingratiating to the fans. The newly empowered GM, Howie Roseman, was so available, he became the only GM in the NFL with his own radio talk show.

It has now been 49 days since Kelly has spoken to the fans, seven full weeks since his news conference on the day after a disappointing end to the 2014 season. Since then, the Eagles have experienced a power upheaval in the front office, some significant changes in the coaching staff and a weird controversy involving Riley Cooper and a calendar.

In each case, the Eagles issued written statements without providing any opportunity for dialogue. Kelly actually ran away from reporters at the Senior Bowl last month. Smolenski has refused all requests for interviews. Against all odds, even Roseman won’t talk.

Now, I’m not going to pretend that fans are clamoring over this issue the way they are debating the merits of Marcus Mariota vs. Nick Foles or the desperate need to acquire some new cornerbacks. Often, fans don’t even notice this kind of snub until something really important happens.

But what I can say after 25 years of doing sports talk on Philadelphia radio is that these same fans care about their football team every day of the year, in good times and bad. And they have questions that deserve answers, if for no other reason than to sustain their interest during these bleak days of winter.

When a team’s only communication with its fans is an appeal for season tickets or a special offer for discounted apparel, the relationship suffers. Fans are not so quick to jump to the defense of someone who won’t speak to them. It’s really just common sense. People skills cultivate good will, in every walk of life.

It is hardly a secret that the problem right now is Kelly, a coach whose role model is the biggest grump in sports, New England coach Bill Belichick. Kelly did more than win his power struggle with Roseman last month. His inaccessibility in the off-season has spread across the entire organization, much like Banner’s did.

And that leads to the final, ironic twist in this story. After a chaotic year in Cleveland, Joe Banner was given another pink slip, for the same reason he ultimately lost his job here. He was bad with people. They couldn’t stand him.

Today, if you would like the views of Joe Banner, they are available on Twitter. He has moved back here, where he has developed a significant following by offering his thoughts, every day, all day. That’s right. The only football executive willing to talk right now in Philadelphia is Joe Banner, the one guy who rarely ever spoke when he was here.

Jonathan Papelbon is still a Phillie. The outrageous closer, whose final gesture to Philadelphia last season was a crotch-grab, is still on the roster, just three days before pitchers and catchers are scheduled to report to spring training.

Is there a better symbol of the failure of president Pat Gillick and GM Ruben Amaro to kick-start a new era than the presence of this ornery, over-the-hill pitcher? Does it make any sense to block the closer of the future, Ken Giles, from important experience in the ninth inning in the lame pursuit of a sucker to take one of the worst contracts in baseball?

After initial reports that the Brewers wanted to add Papelbon to their bullpen, sanity was restored in Milwaukee before the Phils could complete the deal. And now that we know why that deal fell apart, faith in Gillick and Amaro is at a new low.

According to several reports, the Phillies have been holding out for a top prospect in return for a closer who throws a fastball only 91 miles per hour, has a bad attitude and could still be owed $26 million in the next two seasons. The Phils are ready to eat a big chunk of that money, but only if the prospect they get back is exceptional.

Whatever happened to addition by subtraction? Do Gillick and Amaro actually believe that Papelbon returning to the closer’s role is good for anyone? He is on record saying he wants to play for a winner. Giles is clearly ready to take over the ninth inning. And whatever money the Phils can save by dumping Papelbon is better than nothing, isn’t it?

The most alarming part of this Papelbon mess is that it confirms what other teams have been saying all off-season about the ridiculous demands being made by the Phils for overpriced, aging players. Ryan Howard, Carlos Ruiz, Cliff Lee and even Chase Utley and Cole Hamels are all on the market, more or less, with no movement.

Gillick, who in his prime was known as “Stand Pat,” just keeps preaching patience. The man is 77, and he’s in no hurry at all. That’s why fans are bracing for a terrible season – and why Jonathan Papelbon is still a Phillie. 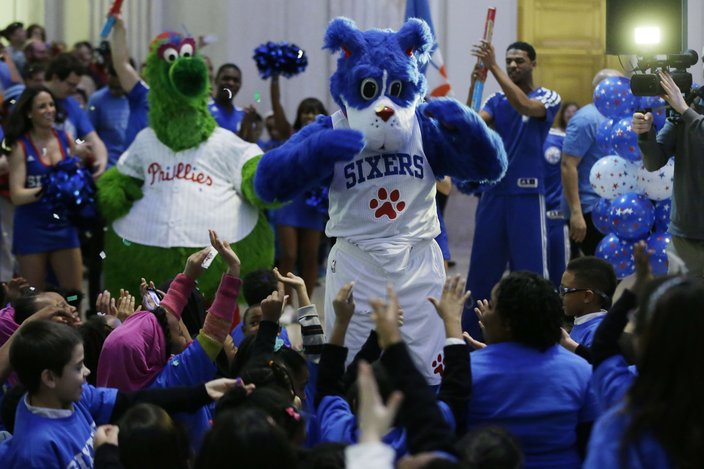 Matt Roarke/AP
The Phillie Phanatic looks on as the Sixers’ new mascot, Franklin enters a news conference announcing him as the team's new mascot at The Franklin Institute, Tuesday, Feb. 10.

The Sixers may have finally found a new star, and they didn’t even have to tank to get him. It’s Franklin the Dog, the mascot who made a surprisingly good first impression in a city where the standard for furry creatures is very, very high.

Unlike the team’s dubious plan to rebuild the roster, the design of Franklin employed creativity and logic – qualities essential to the project after dreadful previous mascots like Big Shot, Hip Hop and the stillborn Phil E. Moose. The Sixers desperately need something to grab the attention of kids. At this point, the team obviously won’t get it done.

So what marketing director Tim McDermott and his staff decided to do was to have kids between ages 6 and 10 determine all of the major qualities in Franklin. That’s why he’s blue, why he dances, and especially why his ears wiggle. A poll of 1,000 children decided all that.

The biggest challenge for the Sixers – or any team in Philadelphia other than the Phillies – is to develop a mascot that complements the Phanatic without trying to top him. The Phanatic is not just the best mascot in the city; he’s the best in the world. When all of us are long gone, the Phanatic will still be there, thrusting his fat hips and jabbing fans with that crazy tongue.

Franklin has a chance to be the city’s second-best mascot – well ahead of the Eagles’ Swoop and maybe even the St. Joe’s Hawk. As with most of these weird creatures, they either have it or they don’t. Franklin has it. He’s fun without being annoying. He’s got charisma.

OK, now that the Sixers finally have someone with promise, it’s time for them to apply the same creativity and logic to the roster. Maybe they should let kids tackle that assignment next.

•    The Riley Cooper calendar snafu was much ado about nothing. Does it really matter that he was the cover boy for February, which is Black History Month? The far bigger issue is what he’s still doing on the Eagles. He is one of the worst wide receivers in the NFL, and he still has all of this racial baggage. He needs to go.

•    The adults running Chicago’s Little League team cheated their way to the U.S. championship, and now they have managed to taint the experience for everyone, including Philadelphia’s Taney Dragons. Far too often, youth sports leagues are about adults chasing their own lost dreams rather than kids having a chance at theirs.

•    Fresh out of jail for reckless driving, ex-Phillie Jayson Werth will be celebrated for his unkempt appearance with a special Chia Pet Night in Washington next season. Remember when the fans were saying he wasn’t worth $127 million? Obviously, they never factored in the promotional value of his scraggly beard.

•    If you want to see how screwed up the NBA is right now, read the letter a disgruntled season-ticketholder sent to James Dolan last week and the Knicks owner’s outrageous reply. Commissioner Adam Silver said Dolan did nothing worthy of punishment. Silver is a puppet for the owners. And Dolan is a disgrace to his sport.

•    Even after a surgeon operated on goalie Steve Mason’s damaged right knee, the ultra-secretive Flyers were referring to the problem as a “lower-body injury.” Just one question: Do you think they told the doctor where Mason was hurt, or did they make him guess, too? You can’t be too careful these days.