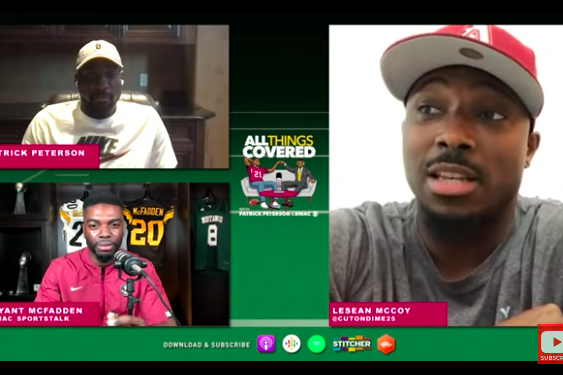 LeSean McCoy spent six seasons with the Philadelphia Eagles, where he remains the team's all-time leading rusher, and was named to the NFL's All-Decade team for the 2010s. As the end of his career nears, he says his unique running style wasn't discouraged by his former coach, Andy Reid.

Former Philadelphia Eagles running back LeSean McCoy has had among the more interesting NFL career arcs for a one-time star winding down toward retirement.

In Philly and Buffalo, McCoy was as good of a workhorse back as anyone in the league, a polished dual threat who built on the style of play that Brian Westbrook developed under Andy Reid before him.

Then he rejoined Reid in Kansas City and won a Super Bowl with the Chiefs, followed by another Super Bowl against Reid's team this past season with the Buccaneers. He didn't play very much, but he's still got two rings to add to his resume.

As Philadelphia's all-time leading rusher, there are practically endless highlights to reminisce about from McCoy's time here, most notably his Snow Bowl performance against the Detroit Lions in 2013, when he amassed 217 yards and two touchdowns in a blizzard.

And yet, there's one thing about McCoy that always drove Eagles fans crazy: the way he held the ball out in the open field, almost inviting defenders to go for the strip. You can see it all over the place in the highlight package below.

McCoy joined CBS Sports' "All Things Covered" podcast this week with Patrick Peterson and Bryant McFadden, where he discussed everything from the Super Bowl to Tom Brady, Andy Reid and Chip Kelly (the interview starts around 33 minute mark).

Asked about his habit of not tucking the ball, McCoy said Reid never wanted to interfere with his game if the issue wasn't causing problems:

With Coach Reid, when I was rookie, some of the coaches would say, 'Hey, tuck the ball,' and I was trying to concentrate on tucking the ball and doing all the right things. Like a robot, you know? And Andy Reid would tell the coach, 'Yo, fall back, let him play his game.' And as I got older and became ... who I am, I would say, 'Coach, why didn't you ever make me tuck the ball?' He said, 'I let you play the game. If you fumble a couple times, it would be different, but you draft players to be themselves.' I think that's why all his draft picks are successful, because he lets them play their game and lets their personalities show.

In his six seasons with the Eagles — four under Reid — McCoy fumbled 14 times.

McCoy also spoke about Chip Kelly, softening some of his more spiteful remarks about the former Eagles coach who shipped him out of town.

I'll say this — he was very smart, he was intelligent, but I think that in the pros, it's different. You can't treat people different, you can't treat them badly. You can't come and yell at them. They ain't kids, they're grown ups. I think he learned that, though. I think if he came back, he'd be different, but I don't think he's coming back. Some coaches need to stay on the collegiate level.

McCoy, 32, hasn't ruled out the possibility of returning for another season. But if this is the end, he believes he should be in the Pro Football Hall of Fame.

"Not even to brag about myself or pump me up, but numbers, I've got numbers, got stats. I've got two championships," McCoy said. "And then, I've been the best running back of my decade."