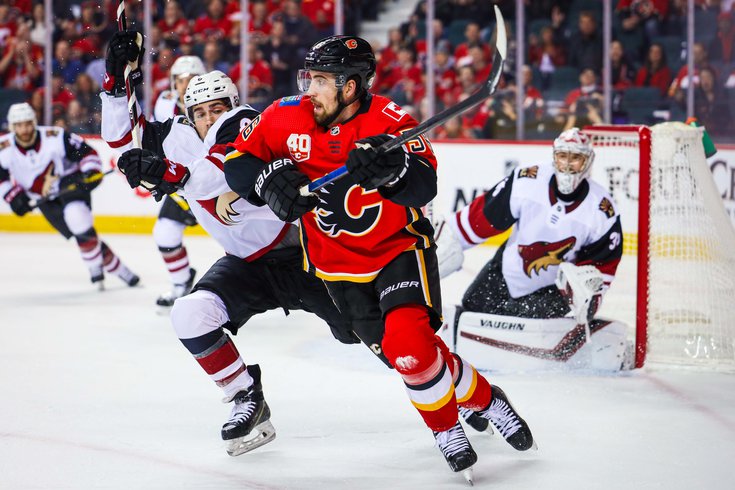 New Flyers defenseman Erik Gustafsson during a game with the Calgary Flames.

UPDATE [5:41 p.m.] — The Flyers have made a move — although it's not exactly what you'd call a big splash, and certainly not a direct replacement for Matt Niskanen — by signing offensive-minded defenseman Erik Gustafsson to a one-year deal that carries a $3 million cap hit. The team announced the signing on Monday evening.

Gustafsson finished last season with the Flames, but has spent the majority of his career with the Blackhawks where he signed as a free agent back in 2015, splitting time between Chicago and their AHL affiliate. Last year, he finished with 29 points in 66 games in the regular season, with 26 of those points (including six goals) coming before he was traded to Calgary. He also added four assists in 10 games during the postseason.

The season prior, during his first full NHL campaign in 2018-19, Gustafsson finished with an impressive 60 points, the sixth most of any defenseman in the league. In fact, those 60 points (17 goals, 43 assists) were more than all but three Flyers posted that season, and all three of those were forwards (Claude Giroux, Jake Voracek and Sean Couturier).

However, all of that offense — and we know how much the Flyers like offensive-minded defensemen — comes at a price.

Erik Gustafsson, signed 1x$3M by PHI, might be the most one-dimensional offensive defenceman in the league. He can generate offence at 5v5 and the PP and produce, but he's an absolute liability defensively. #Flyers pic.twitter.com/3fRTLHUiUp

Still, Gustafsson, 28, was good enough to be a second-line defenseman on a playoff team, leading the team's blue-liners in power play time on ice (he was third on overall on the team in average TOI with 20:53). It will be interesting to see where he slots in on defense for the Flyers — and whether or not his addition leads to any other changes for the Orange and Black.

There's obviously stylistic and role-based redundancies when it comes to Gustafsson/Gostisbehere. And as I've reported for a while, Ghost is very much on the block. But I don't think Ghost market has been strong, so I hesitate to say this guarantees a Ghost trade.

A quiet first day of NHL free agency turned into a quiet weekend for the Philadelphia Flyers, as general manager Chuck Fletcher and Co. stood by and watched as the rest of the dominoes fall without making any moves of their own, at least any moves of note.

And while there technically remains one golden option for the Flyers — former Blues defenseman Alex Pietrangelo — it appears the veteran blue-liner will be headed to Vegas after visiting there this weekend. But, there may be a ripple effect in Sin City that could open up an option, should the team decide to make any sort of splash on the free agent market.

Fletcher said this weekend that the team isn't going to make a move just to make one, but they recently lost Matt Niskanen to retirement, and the team could be looking to replace him with another veteran to pair with some of their young defenseman. If Pietrangelo signs in Vegas, the team will have to shed some cap in order to make room for him, and that's where the Flyers could come in.

Here's more from Sam Carchidi of The Philadelphia Inquirer:

If Vegas does land Pietrangelo, it may free needed cap space by trading talented defenseman Nate Schmitdt, who figures to interest the Flyers. Schmidt, 29, carries a 10-team, no-trade clause in his contract and is signed for five more years at an annual cap hit of $5.95 million.

He was suspended for 20 games in 2018 for violating the league’s policy on performance-enhancing drugs, and he said at the time that it was “surreal” and unwarranted, and that he had used only “supplements provided by my NHL team.”

The 6-foot, 194-pound Schmidt, a Minnesota native who shoots left but can play either side, had 31 points and a plus-11 rating in 59 games last season.

Sami Vatanen, 28, who had 23 points in 47 games with New Jersey last season, is among the righthanded defenseman left on a dwindling free-agent market. [inquirer.com]

There was a report on Sunday night that Schmidt was set to go to the Florida Panthers, but that was later (at least for now) shot down by Pierre LeBrun.

Nate Schmidt has not been traded to Florida. Which is not to suggest he won’t be traded. He’s in play. But the Panthers haven’t dealt for him.

Either way, it definitely appears that Schmidt is on the trade block, and Vegas will need to move him before they can complete a deal with Pietrangelo. Could the Flyers sneak in at the last minute and make a deal to land Schmidt? Will the look elsewhere? Or will they continue to be the most boring team in free agency?

Follow along with all the latest news and rumors right here in our live tracker...