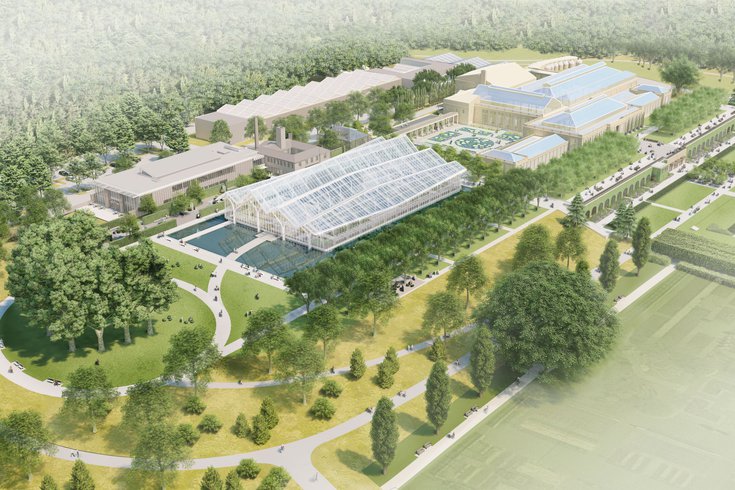 The $250 million 'Longwoods Reimagined' project will be centered around a 32,000-square-foot glasshouse conservatory, with additional plans for a new restaurant and event space overlooking the Main Garden Fountain.

One of the Delaware Valley's most celebrated destinations is poised for a $250 million expansion that will introduce an array of new attractions to its historic horticultural grounds in Kennett Square.

Longwood Gardens announced plans this week to embark on a multiphase transformation, adding several new buildings and plantings across a 17-acre stretch. The project, "Longwoods Reimagined," will connect the east and west sides of the central gardens, creating a unified journey through the formal gardens and open meadows of the Brandywine Valley.

The centerpiece of the expansion will be a 32,000-square-foot glasshouse that seemingly floats on a body of water and rises with asymmetrical peaks. The glasshouse will be dedicated to wild and cultivated landscapes of the Mediterranean, offering a seasonal display of plants alongside pools, canals and low fountains:

In the tapestry-like garden design, iconic plants of this ecology such as aloes, laurels, blueblossom, and Greek horehound hug the ground, with higher plants such as cypress and 100-year-old olive trees rising up into the soaring space while other plantings are suspended from above. Building on the great 19th-century tradition of glasshouses through new sustainable technologies, the West Conservatory is a living, breathing building, with earth tubes and operable glass walls and roof that allow the interior garden to thrive.

Another 3,800-square-foot glasshouse, designed by Brazilian landscape architect Roberto Burle Marx, will be the site of a relocated Cascade Garden full of tropical plantings within the West Conservatory.

Next to the West Conservatory glasshouse will be the new outdoor Bonsai Courtyard, featuring a vast bonsai collection set on pedestals and ledges mounted to wood walls.

The expansion also will include a new restaurant and private event space carved into the hillside surrounding the Main Garden Fountain, which got its own ornate, $90 million renovation in 2017.

Other features of the expansion are a new education and administration building with a library and classrooms, the renewal of the Waterlily Court and the preservation of six historic Lord & Burnham glasshouses from the early 20th century that will be used as year-round garden displays.

As part of the initial phase of transforming the area, Longwood’s Orchid and Banana Houses will close on March 1 for preservation and will re-open in time for Longwood’s 2021 year-end holiday display.

The design for the expansion is led by the award-winning duo of WEISS/MANFREDI Architecture/Landscape/Urbanism and Reed Hilderbrand. The project will be managed by Wilmington-based Bancroft Construction Company.

Longwood Gardens has operated as a public garden in Chester County since 1946, sitting on more than 1,100 acres and consisting of curated exhibits, manicured outdoor fields and land and water fountain features, along with indoor displays. It was formerly the estate of American entrepreneur and conservationist Pierre S. du Pont, who opened his luxurious grounds to the public.

The local treasure was included among the continent's top 10 gardens during the annual North American Garden Tourism Awards in 2019.

"With the assistance of the brilliant team of WEISS/MANFREDI and Reed Hilderbrand, Longwood Reimagined will be the largest undertaking in our history, enhancing the dazzling and deeply satisfying Longwood Gardens that will continue to enthrall our public for decades to come," said Paul B. Redman, president and CEO of Longwood Gardens.