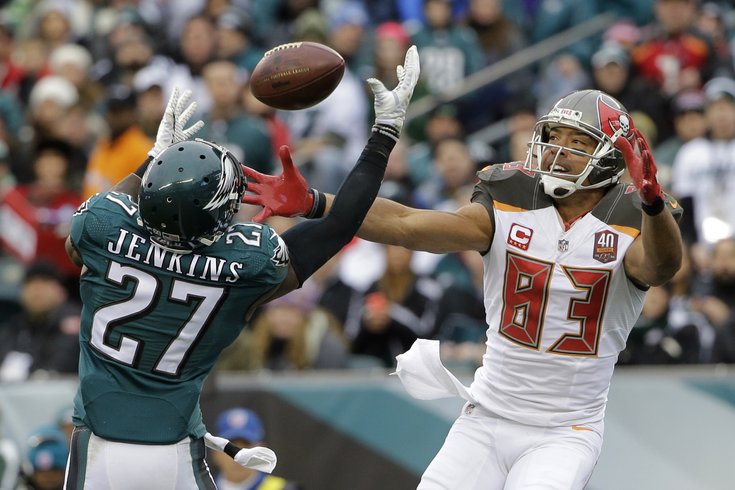 Over the last two seasons, a fairly common occurrence while watching the Eagles' defense has been footballs sliding through the hands of safety Malcolm Jenkins. You can feel the buzz in the stadium whenever it happens. There's the sound of fans anticipating a monster play, and then the subsequent "Ahhhhh!" after the dropped interception.

Often times the dropped pick is all you see. Lost in the missed opportunity for a huge play, you can miss what Jenkins does to put himself in position to make the play in the first place.

In Week 1 against the Falcons, for example, here's Jenkins covering Julio Jones man-to-man on third down? First of all, how many safeties in the league are even asked to do that? Watch him break on the ball and put himself in position to make the play... and then.. Ugh. Most safeties are giving up a first down trying to cover guys like Jones. Jenkins at least gets the incompletion, but the Falcons got a field goal attempt instead of the ball potentially going back for a score the other way.

From that same game, Jenkins runs the route for the receiver, turns to locate the ball, and then, again, ugh.

There are plenty more like the above, but we won't pile on. In our notes following the Eagles' OTA practice on Tuesday, we noted that Malcolm Jenkins dropped what should have been an easy interception.

Still, Jenkins is one of the most underrated players on the team, in my view. When we listed the 10 Eagles players they could least afford to lose to injury, we had Jenkins at No. 4.

Jenkins does everything. He tackles well near the line of scrimmage, he can cover slot receivers man-to-man, and he can play deep middle. He's also widely viewed as a leader both in the locker room and on the field. And it's not just that he can do all those things -- He does them all very well.

In fact, over the last two seasons, Jenkins is second in the NFL among safeties in pass breakups:

He was also fourth among NFL safeties in 2015 with nine tackles for loss. When you can be among the league leaders both in pass breakups and tackles for loss, it's probably fair to say Jenkins is as complete a safety as you'll find in the NFL.

If only he could catch, we'd probably be talking about Jenkins as comparable to a player like former Ravens great Ed Reed. Jenkins realizes it. A season ago, he was the seventh alternate to make the Pro Bowl, which was laughable, frankly, but Jenkins said the perception of his game would be higher if he capitalized more on big play opportunities.

"That's one of the things I want to improve on," said Jenkins. "The biggest thing on the list of things that I want to get better at is taking advantage of those opportunities. I really felt like to a point that I've got a really good grasp on the defense, and what offenses are trying to do, and putting myself in those positions to make plays. So I've been doing extra catching, different ball drills, all that stuff.

"There was more of an emphasis of that this year than any other year... It's probably my main focus this year."

It's not like Jenkins doesn't make huge plays as it is. In his two seasons with the Eagles, he has five INTs, five forced fumbles, 13 tackles for loss, and two touchdown returns.

There aren't many safeties in the NFL who have put themselves in a position to make big plays as much as Jenkins does. The hard part is reading what the offense is trying to do, and then having the speed and athleticism to put yourself in between the quarterback and the receiver. Jenkins has proven he can do that consistently. The easy part, seemingly, is making the catch.

Jenkins has the hard part down.