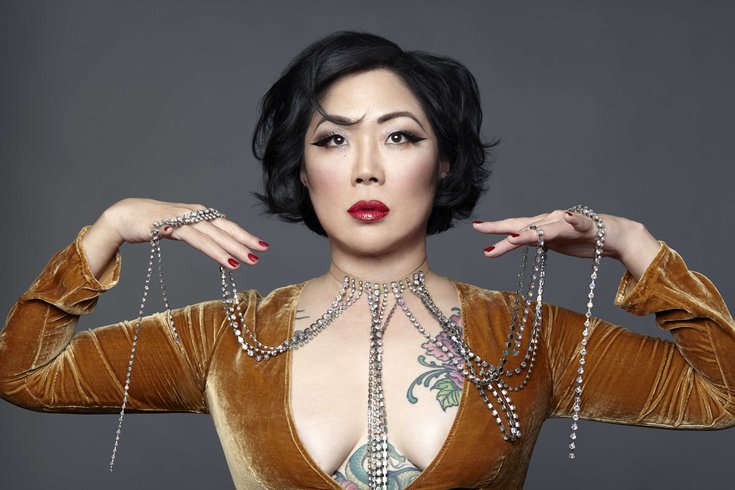 Margaret Cho continues to live on the comedic edge.

As edgy as Margaret Cho can be, the veteran comic is old school. The unpredictable former sitcom star says she is most inspired by the late Debbie Reynolds. It makes sense since Cho, who will appear Thursday through Saturday at Helium, is also a musician and a fashion designer.

Cho, 50, who impressed as North Korean leader Kim Jong-un during a "30 Rock" episode, reveals that Donald Trump is a fan, weighs in on the Lori Loughlin scandal and divulges whether she ever had sex in order to fast track a project.

Q: There are a plethora of candidates for President. Who do you support?

A: I love (South Bend, Indiana) Mayor Pete (Buttigieg) I love his energy and he represents a lot of different people, each of whom I identify with. I also like Bernie Sanders. I worked for him and Hillary Clinton during the last election.

A: Donald Trump was always trying to get me on. Trump told me many times that he was a big fan.

Q: Trump was good friends with Joan Rivers and reportedly loves comedy but why can't he take a joke?

A: He has a huge soft spot for female comics but his capacity to punish them is ridiculous.

Q: You're referring to how he nearly ruined Kathy Griffin's career.

Q: For someone who loves comedy I've never seen him laugh.

A: That is strange but I think he wants to be like comedians. He wants to be clever. That's why he loves Twitter. But his idea of a joke is saying 'what a loser.' Trump thinks he's an insult comic.

Q: What are some of the topics that you're going to talk about when you come to Helium?

Q: You look good for hitting the half-century mark.

A: I feel good. I'm going through menopause and it's a gateway drug to happiness. I'm at a certain age. It's given me perspective. I love it.

Q: But you'll never have a child.

Q: And what about Lori Laughlin? I always thought the rich and famous bought their children into the top schools.

A: Yeah. Me too. The elite have been able to buy the future for their kids.  It's wrong. Why should a rich kid, who is the child of a famous person, beat out a person, who is more deserving? But I think because of what Trump has done, things are changing. There have been a lot of protest and there is the Me Too movement. We're now about holding everyone accountable, even rich celebrities.

Q: Speaking of the Me Too movement, were you ever victimized by a powerful Hollywood player?

A: I wrote a script for a movie that I wanted to get made. There was a producer, who offered me $1 million for my movie if I had sex with him.

Q: Did you have sex with him?

A: I actually considered it but I didn't do it. He tried to intimidate me. He has yet to be outed .He's still working in Hollywood. He's a very big producer. But what he did just happened during the '90s. That level of harassment was something young actresses had to deal with. I'm just glad I wasn't in the mood to have sex with him. I've had sex with people I didn't like all the time. But none of those encounters were financially motivated.

Q: Who would you have had sex with to advance your career?

Q: It's funny that you mention Lynch and MacLachlan since the rumor was when they were making the disturbing classic film "Blue Velvet" Lynch wanted Dennis Hopper to sodomize MacLachlan but the latter refused to act that scene out.

A: That would have been insane!

Q: What else are you working on?

A: I'm working on music with my band. (American Music Club's) Mark Eitzel is my band leader. We're working on some experimental music.

Q: Who is your favorite humorist in music?

A: Morrissey and Bob Dylan. Humor is really powerful in music. I love novelty acts like Weird Al Yankovic, who is so cool.