Matthews: Pederson like a 'blood brother' because he's 'been in our shoes' 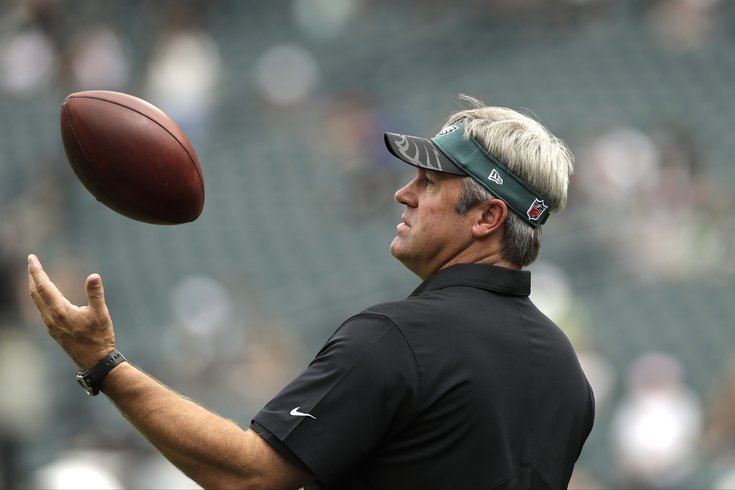 Everybody's happier after a win, even if it's against the lowly Browns. The fans. The players. The coaches. The front office staff. And, yes, the owner. Just a take a look at what's going on in Cleveland today.

Carson Wentz, who had one of the best Week 1 debut's for a quarterback in quite some time, got the lion's share of the headlines on Monday -- deservedly so -- but he wasn't the only rookie having a successful debut at the Linc this weekend. His coach, Doug Pederson, had a great game plan that allowed Wentz to find his comfort zone and thrive in his first NFL action. It's called playing the Browns.

Seriously, though, Pederson seemed to check off all the boxes he could on Sunday, including the decision not just to go for it on 4th and 4, but to put the ball in the rookie's hands. Wentz hit Zach Ertz for four and half yards across the middle for a first down. And on the very next play, he connected with Nelson Agholor on a beautiful touch pass -- against a very good cornerback in Joe Haden -- for a 35-yard touchdown.

Pederson admitted after the game that he was probably more anxious than Wentz leading up to kickoff. Once one o'clock rolled around, however, there was very little evidence of those nerves.

Following the 29-10 win, nearly every player who was asked gave a glowing assessment of Pederson (much like they did when asked about Wentz's debut). But one response stood out more than the rest, especially when put it in the context of how some of the players in that locker room viewed their previous boss, Chip Kelly.

And that belonged to Jordan Matthews.

“I felt like Coach Pederson went out there and he did his thing," Matthews said when asked if it felt like he was playing for a rookie coach. "Like I said, the best thing about Coach Pederson is just his authenticity. He’s played the game and not only has he played the game, but he’s been in our shoes. And when I say ‘our shoes,’ he’s played in the city of Philadelphia.

"Playing in the city of Philadelphia - it’s not like any other sports state. When they’re playing football in here, it maximizes that much more. So he’s been in those trenches before. When I see him, it’s not even as much as I see a coach, it’s like ‘Yo Pops, I got you.’ That’s a blood brother right there, no different from those guys in the locker room.

"Sometimes Coach Pederson doesn’t even have to say much. We already feel that family vibe from him so we just really want to go out there and win for him. I feel like that’s his best asset. I felt like he called a great game. Obviously he’s going to be hard on himself too. He’s going to make sure he goes back and corrects some things. But at the same time as a collective unit as need to just hone in realize it’s one game, put it behind us and get ready for Chicago.”

I happened to be taking video when Matthews gave this answer, and hearing it in his voice is so much better.

Jordan Matthews says the fact that Pederson played here makes him just like one of the players. #BloodBrothers pic.twitter.com/MuO1avBLZU

Having a unified locker room is quite a pleasant change of pace.

And in case you missed it, here's video of Pederson's postgame speech to his team...