Jocie Van Kirk and friends were exploring off-trail; she fractured her neck, back and pelvis 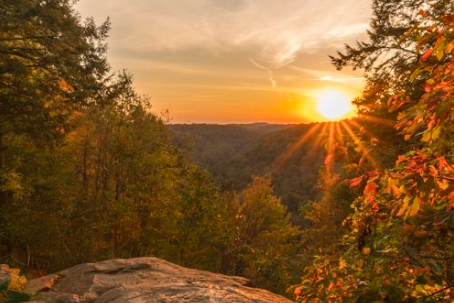 Jocie Van Kirk, 21, survived a fall from a dangerous area of McConnells Mills State Park in Butler County, Pennsylvania. The Slippery Rock University student was walking with friends when she tumbled 80 feet, hitting dirt before rolling into a creek.

A 21-year-old student in Western Pennsylvania is recovering from injuries she suffered after falling 80 feet from cliff at a local state park.

Brian Flores, a member of the park staff, said Van Kirk and her friends were exploring off-trail in a dangerous area that usually requires safety equipment.

Van Kirk's fall wasn't uninterrupted, according to the Post-Gazette:

Ms. Van Kirk, originally from Pittsburgh, was walking on a sloped rock when she lost her footing around 3:20 p.m., Mr. Flores said. She tumbled 15 to 20 feet down the sloped rock before hitting a tree, which threw her down about 25 to 30 feet to the next level. There, she hit dirt — rather than jagged rock — before tumbling 15 feet into the creek below.

After the fall, Van Kirk's friends called 911 and removed her from the creek. Firefighters brought her to safety before she was transported by helicopter to UPMC Presbyterian in Pittsburgh.

Chelsea Van Kirk, Jocie's sister, said in an update on Facebook on Monday that Jocie fractured her neck, back and pelvis. It wasn't yet clear whether surgery will be required.

The incident comes less than a week after a FedEx driver in North Carolina survived a 75-foot plunge from a highway bridge after he stopped to help a stranded driver. The FedEx driver landed in a sandbar, escaped with fractured ribs and a collapsed lung.