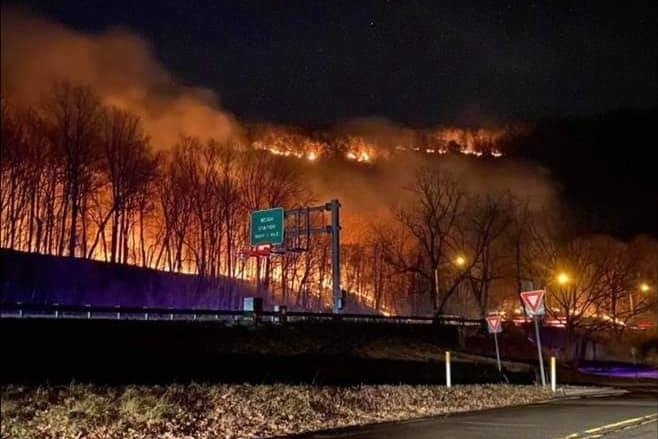 A wildfire continues to burn at Delaware Water Gap National Recreation Area on Monday, Feb. 24, 2020. The fire started on Mt. Tammany in Hardwick Township, New Jersey. By Sunday night, it had burned 70 acres of the recreation area which straddles the border of New Jersey and Pennsylvania.

By Sunday night, the fire had spread to 70 acres of the recreation area, which straddles the border of New Jersey and Pennsylvania, according to the Delaware Water Gap Fire Department.

Hikers have been asked to avoid the area. Both the Red Dot and Blue Blaze trails will remain closed until the fire is extinguished.

On Monday morning, the Knowlton Township Fire and Rescue Co., which is among the firefighters responding to the blaze, tweeted that helicopters would continue dropping water on the fire. That process had begun Sunday, Kathleen Sandt, a spokeswoman for the National Park Service, told New Jersey Herald.

!! Incident Update The Rock Face Fire!!
Currently no KTFR or St Luke's ETS units are engaged on the incident.

This morning, the National Park Service provided an update to Knowlton Township regarding the forest fire that began yesterday on Mount Tammany in the Delaware Water Gap pic.twitter.com/umuO25Wcov

The cause of the fire is under investigation, but it did not begin as a controlled or prescribed burn.

The fire service expects to keep the fire contained to the west of the talus slope, which is the area of large boulders located next to trailhead entrance.

Helicopters will continue dropping water onto the mountain today. Retardant could be used if needed, but it is not expected at this time.

The area is closed to the public until further notice.

The National Park Service and NJ Forest Service will provide another update later.

Through the night, local and National Park Service firefighters climbed up Mount Tammany and used backpack tanks to douse the fire.

The cause of the fire is under investigation, Sandt said. Weather is not believed to be the cause. Despite a relatively snow-less winter, the area is not in drought conditions and the fire danger level in the region is considered low, according to the New Jersey Forest Fire Service. Knowlton fire company officials said the fire did not ignite from a controlled burn.