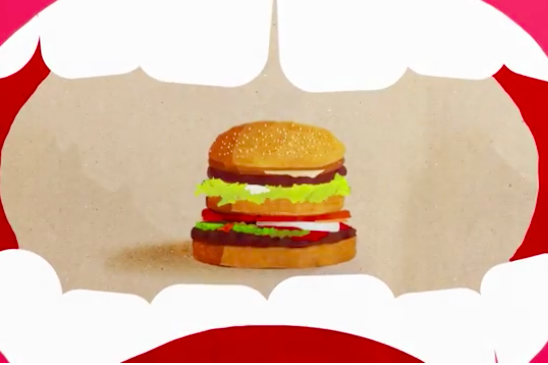 Burger King proposed to build a burger the world thought would never happen, just as some doubt that world peace can ever become a reality. McDonald's declined.

During next month's International Day of Peace on September 21, the world will reflect on the ideal of nonviolent conflict resolution and cooperation both within and among all peoples and nations.

The war to clog your arteries at low cost will continue unabated, however, after McDonald's turned down a temporary truce offered by Burger King to create a charitable hybrid, the 'McWhopper.'

The proposal, hatched by Burger King as a publicity stunt, splashed a full-page open letter in The New York Times and Chicago Tribune calling for the McWhopper to be sold for one day at one location. All proceeds would go the nonprofit Peace One Day. 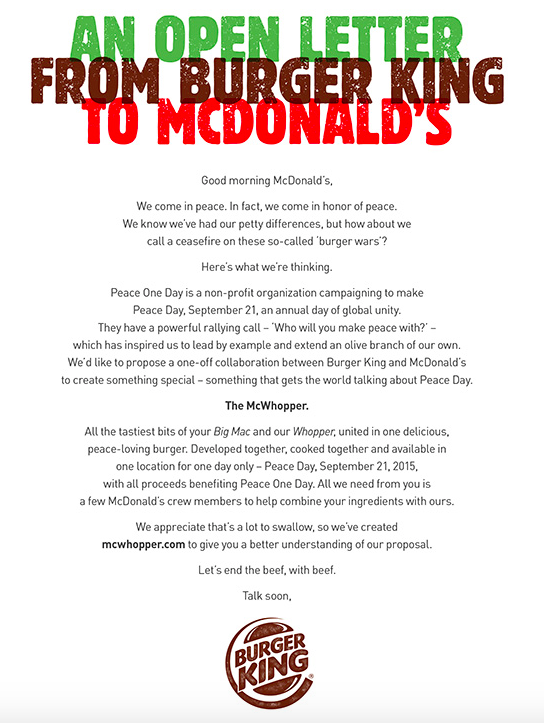 Open letter from Burger King to McDonald's that appeared in The New York Times and Chicago. (Contributed Art/Burger King)


It didn't take long for McDonald's to get back to its rival with a rejection letter on posted on Facebook by McDonald's CEO Steve Easterbrook.

Inspiration for a good cause... great idea.

We love the intention but think our two brands could do something bigger to make a difference.

We commit to raise awareness worldwide, perhaps you’ll join us in a meaningful global effort?

And every day, let's acknowledge that between us there is simply a friendly business competition and certainly not the unequaled circumstances of the real pain and suffering of war.

We’ll be in touch.

P.S. A simple phone call will do next time.

The post script is particularly harsh given the amount of time, attention and probably money Burger King put into the McWhopper website it created to deliver the proposal.

Sure, there are other ways for the companies to promote peace together, but this was a pretty creative idea that would have drawn a lot of interest. They even created mock-ups of take-out bags and attire for the event, not to mention this video.

Maybe McDonald's thought it would trivialize the issue Peace Day is dedicated to addressing, but whatever the company proposes as a meaningful alternative remains to be seen.