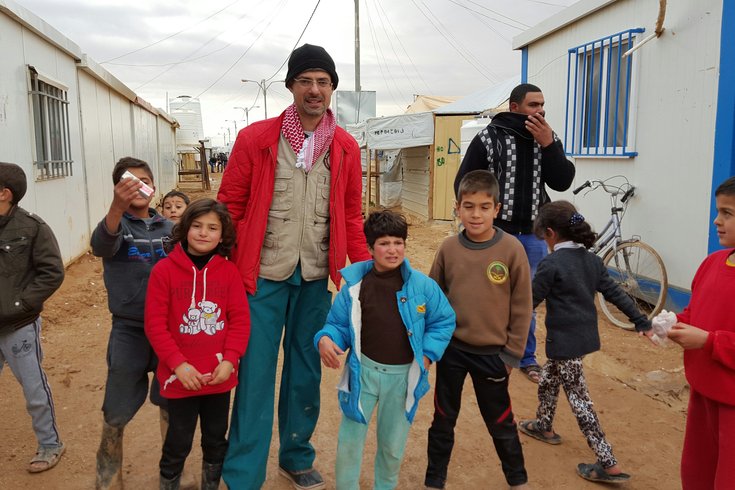 In January, central New Jersey pediatrician Dr. Ayman Mansour joined 70 volunteers from all over the world on a medical mission to Jordan. Organized through the Syrian American Medical Society (SAMS), Mansour donated a week of his time, talent, and energy to serve Syrian children residing in the Zaatari refugee camp, home to 80,000 inhabitants. Zaatari is the largest refugee camp in the Middle East and currently the fourth largest refugee camp in the world.

Recently, Mansour joined me for a discussion wherein he shared his experiences in Zaatari as well as an affirmation of our collective moral duty to care for the world’s children, especially in times of war.

First of all, tell me about yourself, Dr. Mansour.

Well, I’ve lived in New Jersey for most of my life and I’m married with three children.

What called you to the practice of medicine?

What motivated me to enter medicine was an experience I had during an internship with the World Health Organization in Alexandria, Egypt. I was working on public health projects in the shantytowns of the city and I saw a part of Egypt that I had not witnessed before, despite the fact that I had visited the country many times. During my Master’s in Public Health studies, I learned of medical professionals traveling around the globe to serve in areas afflicted by severe poverty, natural disasters, and war. That part of the profession really intrigued me and was the “calling to medicine” for me.

Describe the purpose of your recent medical mission. How many Americans joined you in Jordan?

The purpose of the Syrian American Medical Society (SAMS) mission was to provide medical services to residents of Zaatari, the largest refugee camp in Jordan. SAMS had an agreement with the Jordanian Ministry of Health that in order to provide services in the main camp, we were also obligated to provide services in the free medical clinics around the country that served the refugees who had integrated into major urban centers but were still in great need of medical attention. 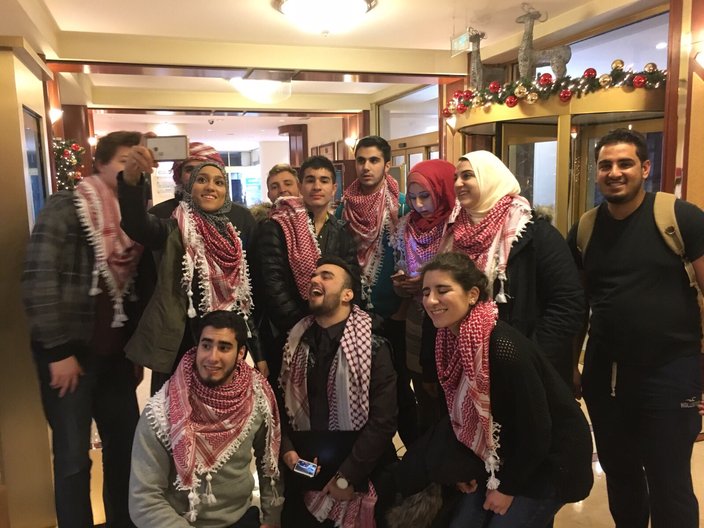 I joined 70 volunteers from different parts of the world. Most of us were from the United States, but there were also volunteers from Canada, the United Arab Emirates, the United Kingdom and Jordan. We were divided into groups and assigned to 14 different locations. Our mission was unique in that it included a large contingent of college students studying dentistry and medicine. Many of these students spoke Arabic and served as translators for the non-Arabic speaking medical volunteers. Collectively, we were able to provide services to over 5,000 beneficiaries, mostly Syrian refugees. This included 28 cardiac interventions, 300 dental procedures, 350 pediatric blindness screenings, nine plastic surgeries, and 50 pain relief interventions.

One service that was addressed, but still requires much greater attention, pertains to mental health. There was only one psychiatrist with us and it was difficult to bring patients to her because mental illness and psychological disturbances are a taboo topic for many Syrians.

You are a pediatrician. Given this, describe the children at the refugee camp. What images and stories stay with you?

One of the first things you notice when you entered the camp was the great number of children. They were curious, playful, and approached us with smiles, laughs, and hugs -- as all children would. This was especially true if you had stickers or small toys!

There were two situations that really stay with me. The first occurred when I was working in a physical therapy center and looked into the eyes of six injured young men, one of them being 15 years of age. That particular teen was sitting in a wheelchair with a solemn look on his face. After talking to him, I discovered that he was paralyzed from the legs down due to being shot by a sniper in the back. 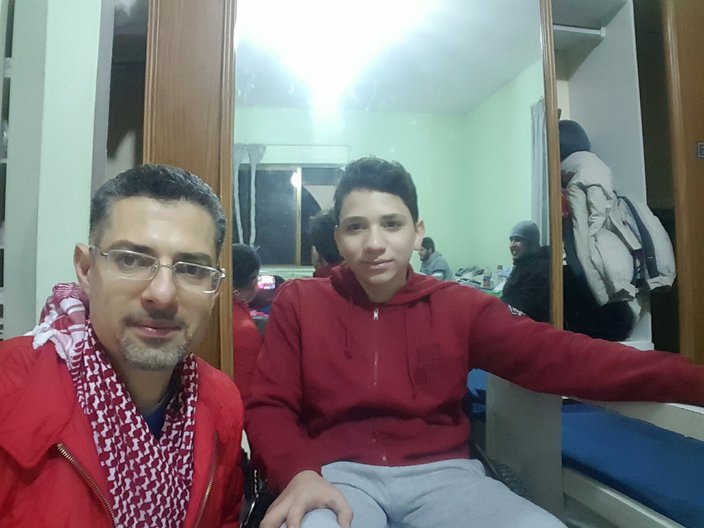 I also will never forget a 7-year-old patient who, three months prior, had an echocardiogram showing a hole in his heart. I asked the boy’s parents if they followed up with the cardiologist. “No,” they stated, “we were not able to.” I had the impression that this was due to their financial situation. So why were they bringing him in today? “Well, he’s complaining of chest pain. And when he runs or just walks long distances, he becomes short of breath,” they stated.

I listened to the boy’s heart and I heard the clearest, loudest systolic murmur that I ever have heard. I composed myself so as not to look too anxious, and I told the parents that their son needed to see a cardiologist as soon as possible. They asked if there was any kind of medicine that I could give him to help his condition. “No, he most likely needs surgery,” I explained. I did not go into details that their son was probably presenting early signs of congestive heart failure. Their looks of concern and despair were almost unbearable.

I did not have an EKG machine. I did not have any cardioprotective medications. I did not know the nearest cardiologist. Furthermore, I realized after the clinic day was over that they don’t register the patients’ names with phone numbers! “How am I going to track this family down?” I thought.

I spoke to the director of the clinic and pleaded for him to take the patients and families contact numbers as the refugees generally have cell phones. “They’re afraid to give us their numbers,” he replied.

Why did you decide to go abroad and serve in this way?

I had been following the Arab Spring ever since the 2011 Tunisian revolution that caused a domino effect of political protest around the region.  Many countries went through or are still experiencing, difficult transitions. However, what ensued in Syria is beyond human comprehension. It is estimated that more than 220,000 people have been killed and 4 million people displaced externally, another 7.6 million internally due to Syria’s civil war.

I had wanted to go to help out for a couple of years now; I was just waiting for the opportunity to travel and help in anyway possible.

What hope do you have, based on your experience, for Syrian refugees?

In the interim, if neighboring countries are accommodating to the refugees, then they will find a way to survive. The countries, especially in Europe, need to consolidate their efforts and plan for a viable solution for this diaspora. 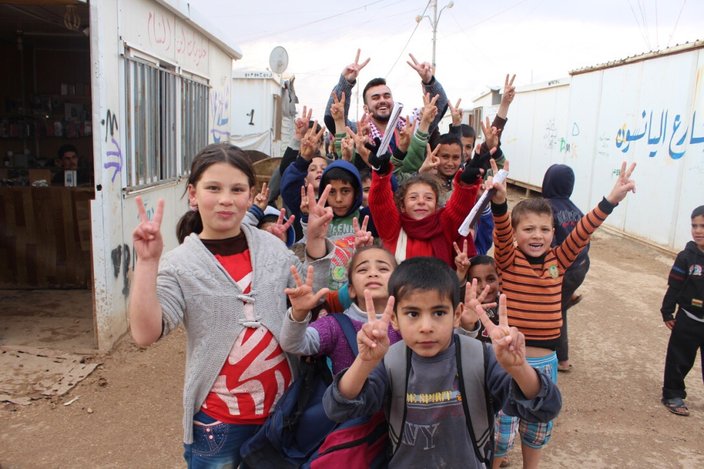 What can we do?

Spread the word about what is happening in Syria to your friends, families and coworkers. If you have medical expertise and are willing to travel, consider serving on a medical mission. It will be one of the most unforgettable experiences of your life.

In terms of political solutions, we need to pressure our representatives to support bills that should have been enacted a long time ago such as “No Fly Zones” or “UN Safe Havens.” Such bills are specifically designed to aid civilians displaced by conflict inside and outside of Syria.

It’s a fallacy to believe that the Syrian civil war is too complex of a situation to solve or that a single individual can’t do anything to make a difference. Actually, the situation is quite simple. One of the most brutal, sinister regimes the world has witnessed this century has tried to ruthlessly suppress a popular uprising. Innocent civilians involved in that uprising needed to arm themselves since their peaceful protests were met with tanks and guns. Tragically, extremist groups like ISIS have taken advantage of the power vacuum and the Syrian regime has hired mercenary armies – the Russian air force and Hizbullah soldiers to do its job in “rebel-held” territories. To a certain extent, the Syrian civil war has turned into a proxy war between the West and Russia. Yet, the core of the issue remains -- an illegitimate dictatorship is brutally suppressing an opposition and ravaging its own country.

Finally, I suggest praying for the millions of people from Syria. They need it.