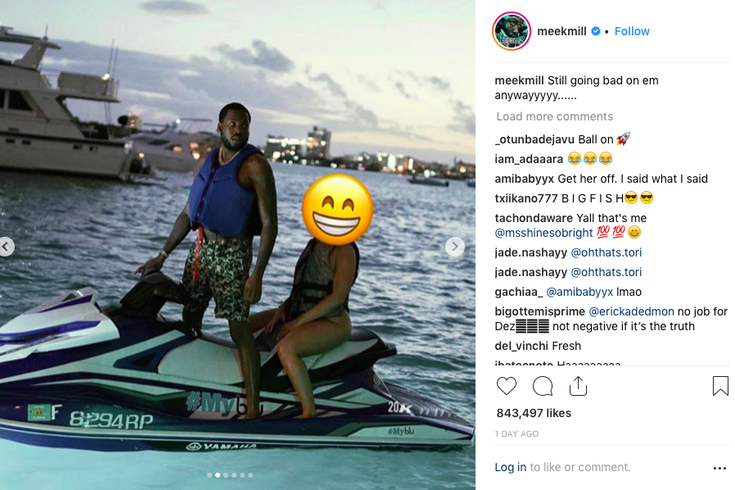 Meek Mill starts his 2019 on the water with a mystery woman. The North Philadelphia-born rapper hasn't been linked to a serious girlfriend since his split with Nicki Minaj at the start of 2017.

Meek Mill ended his momentous 2018 with a Christmas charity event in North Philadelphia, where his 7-year-old revealed the number one item on his wish list.

For a man who spent nearly half of last year in prison and the other producing the critically acclaimed comeback album "Championships," finding a long-term partner was probably not a realistic 2018 goal.

RELATED: BET names Meek Mill its 2018 Man of the Year

But if we're to believe some Instagram sleuths trying to unpack an unusual Wednesday post from the North Philly native, Mill isn't wasting any time addressing his son's request in 2019. And he's not looking for a reunion with ex-girlfriend Nicki Minaj, either.

Minaj and Mill were Miami for New Year's, but separately. Minaj was at Liv nightclub and Mill was hosting a party at Story nightclub. Miami is also where Mill posted these photos to Instagram. The second photo in the post below is flat-out odd. Why would Meek Mill need to cover up the face of a woman he was spending time with on a jet ski?

Beyond that, he had to expect that some of his 15 million followers might dig into the photos to identify the woman.

It took less than 24 hours for The Shade Room and VladTV to propose a theory about the woman on the jet ski. Both sites claim the woman in the photo is named Janice and that her Instagram account is @Jannyram_.

An Instagram story from the woman reportedly claims the Internet is "jumping to conclusions" about this apparent love interest. That is what the Internet does best, yes. Meek Mill obviously wanted his fans to ask these questions, or else he wouldn't have posted the picture, or wouldn't have put the emoji over her face, making her identity a mystery to be solved.

For the sake of Meek's son, let's hope his dad is taking another step in the right direction.