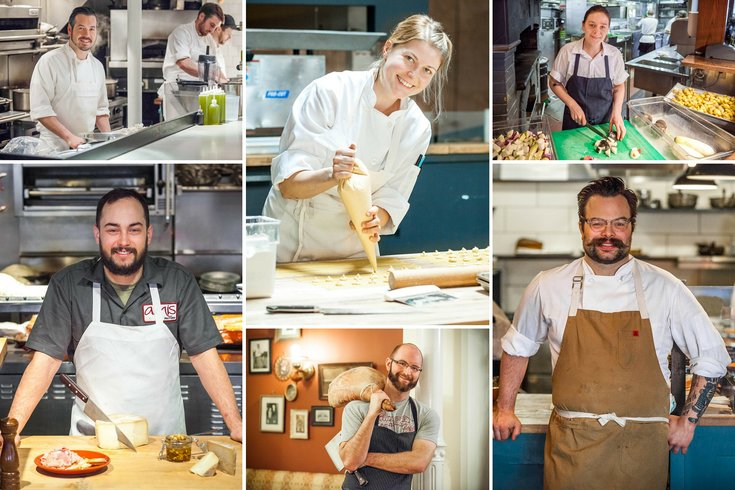 Behind Philly’s better-known chefs is an army of cooks, dishwashers and other staff putting in crazy long hours to ensure that everything runs just so.

Near the top of the kitchen hierarchy are sous chefs. They don’t get the attention and accolades, but they bear tremendous responsibility for day-to-day operations — everything from supervising line cooks to handling inventory to developing menus.

Here we shine a spotlight on a half-dozen under-the-radar sous chefs. From restaurant lifers to a former art museum guide, they all help make their bosses look good. 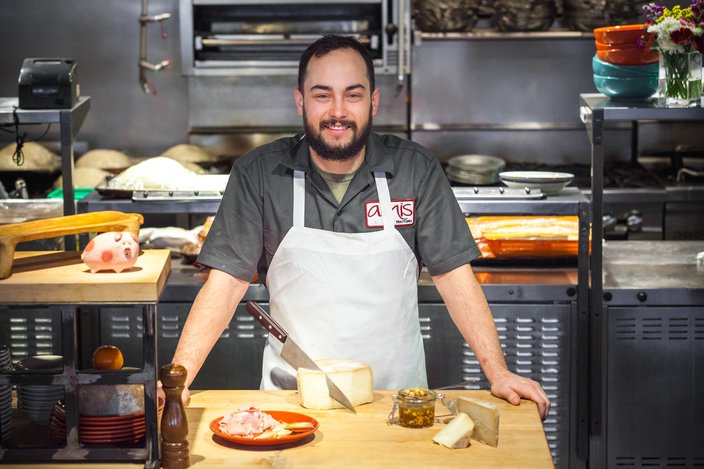 Thom Carroll/PhillyVoice
“I’ve been cooking since I was 14,” says Drew DiTomo, 26. “I was a line cook in high school. I really like the work, the physicality of it.”

DiTomo grew up in West Philly and went on to earn an associate’s degree from the Culinary Institute of America in Hyde Park, New York. In addition to his many jobs in the Philadelphia area, he once worked for chef David Bull in Austin, Texas.

But it was a six-month gig at an agriturismo cooking school in Tuscany that cemented DiTomo’s passion for rustic Italian food.

“I was in Italy, but I wasn’t really doing the type of Italian food I wanted to do. The chef there was really into modern techniques,” he says.

When he returned home in 2014, DiTomo applied for a garde manger position at Amis and eventually worked his way up to the executive sous chef job.

There, he found a kindred chef spirit in Brad Spence, a partner in the Vetri Family group.

“I love working with Brad,” DiTomo says. “We think the same. We keep everything really simple.”

Spence says that DiTomo has always been a positive force in the restaurant.

“Drew is the kind of chef that people want to work with. How much he cares and how much he loves what he does is very clear.” 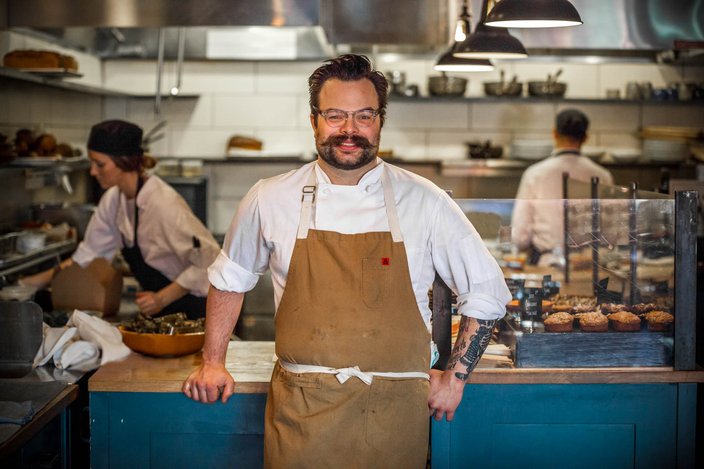 Although he dabbled in the kitchen before college, it wasn’t until a study abroad trip to South America that Chuck Formoso, 32, really caught the cooking bug.

While he was living with a Cuban family in Santiago, Chile, Formoso learned about Latin American politics, and on weekends, he helped his host father prep big Sunday meals.

“My own family cooked, but this guy really enjoyed it. I was impressed with what he could do with some fish, some cilantro and a couple of potatoes,” Formoso says.

Back in the States, he found work at a slew of diverse restaurants over the years, from a French bistro in Charleston, South Carolina, to the Michelin-starred Boka in Chicago. Formoso returned to the Philly area to help his friends open Petruce et al. in 2014.

About a year and a half ago, he joined Ellen Yin and Eli Kulp’s team at High Street. Culinary director Jon Nodler says that Formoso inspires the staff with his work ethic and breadth of knowledge.

Formoso aims to use those smarts along with his access to top-quality ingredients to put forward the best possible version of modern American food.

“The company is really on the cusp of something quite large, and I’m excited to be a part of it,” he says. 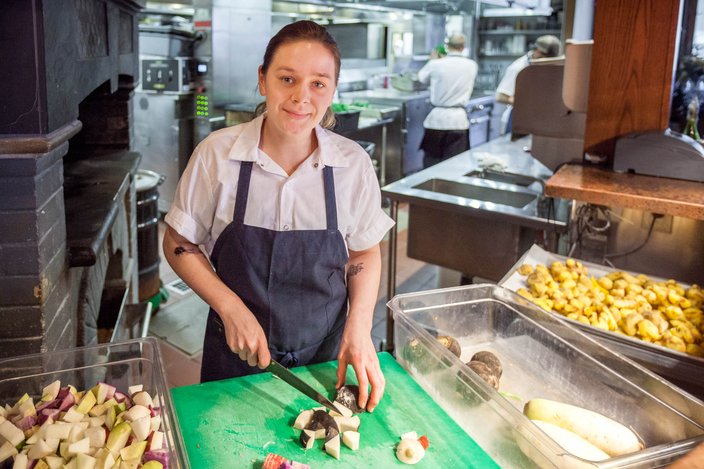 Thom Carroll/PhillyVoice
“I thought I was set for life,” Elaine Gardner, 26, says about landing a job at Le Bec-Fin after graduating from the Pennsylvania College of Technology in December 2011.

She’d been invited back after a previous internship, but shortly after she arrived, Georges Perrier announced plans to sell the iconic restaurant.

“I didn’t know much about Philly then,” says Gardner. But someone told her to check out Zahav, and she’s been with the CookNSolo group ever since.

After a couple of years as a line cook, Gardner left to help open Dizengoff, then returned to Zahav last summer.

Now executive sous chef, she gets high praise from boss Michael Solomonov for her strong palate and hard work.

“All around, she’s a rock star,” Solomonov says.

Gardner feels very fortunate to have found a place at the company. 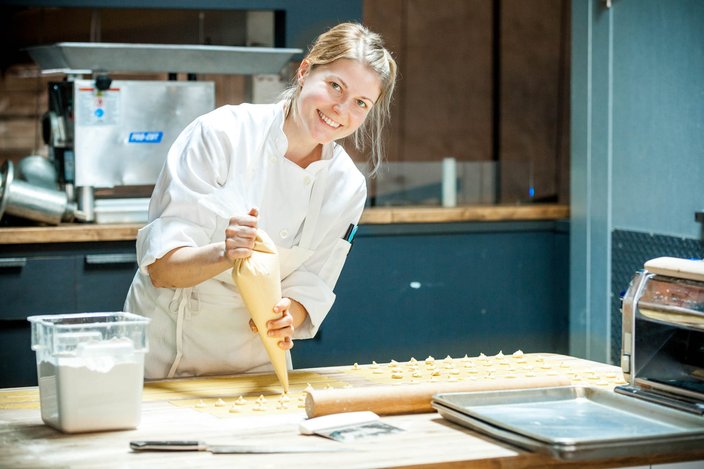 When Katie Maley, 29, showed up for her interview with chef Damon Menapace, she came bearing gifts — in the form of homemade peach hand pies.

“That was just so special and memorable,” says Menapace, who hired Maley as a line cook for the opening of the 13th Street Kitchens group’s hybrid restaurant-butcher shop.

After studying art theory and Italian at Northwestern University, the Connecticut native worked as a gallery guide at the Guggenheim Museum in New York City.

But Maley came to realize that a career in the art world was not for her.

“Every day I was just looking forward to going home and cooking,” she says.

So she switched gears and moved to New Mexico for an AmeriCorps sustainable agriculture program.

A kitchen job at a Quaker retreat center near Philadelphia followed. Over three years, Maley learned how to make everything — including breads and yogurt — from scratch.

Those skills, along with her passion for responsible sourcing, have made Maley a real asset to the Kensington Quarters team.

“I’m just super happy with her, and I hope she stays around for a while,” Menapace says. 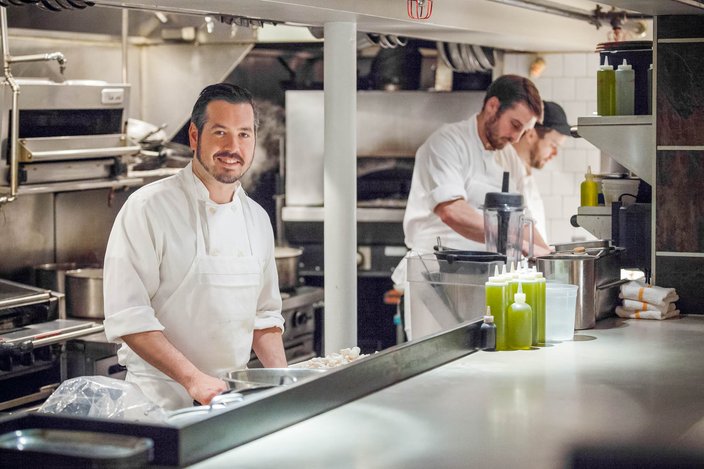 Thom Carroll/PhillyVoice
From a young age, Dominic Piperno, 32, thought he might want to cook for a living. But to appease his father, he agreed to get a bachelor’s degree in business first.

During college in Vermont, he waited tables at the New England Culinary Institute.

“I found myself talking to the chefs all the time,” Piperno says.

He later moved to New York City to attend the French Culinary Institute. The program included nine weeks in Parma, Italy, followed by three months at a family-run restaurant in Chianti.

“It was an incredible learning experience,” says Piperno, whose father was born in Italy. “That’s where I honed in on making fresh pastas and breads.”

Piperno helped open a restaurant in Costa Rica, then returned home to South Jersey to work with Joey Baldino at Zeppoli for two and a half years.

In early 2014, he started as a line cook for chef Greg Vernick.

“I love working for Greg. He’s an incredible chef and mentor,” says Piperno.

Vernick says that Piperno has brought a whole new curriculum to the kitchen with his pasta expertise, and he foresees “tremendous success” in Piperno’s future.

“Dominic is a very kind person who respects the ingredients as much as he respects the people he works next to,” Vernick says. 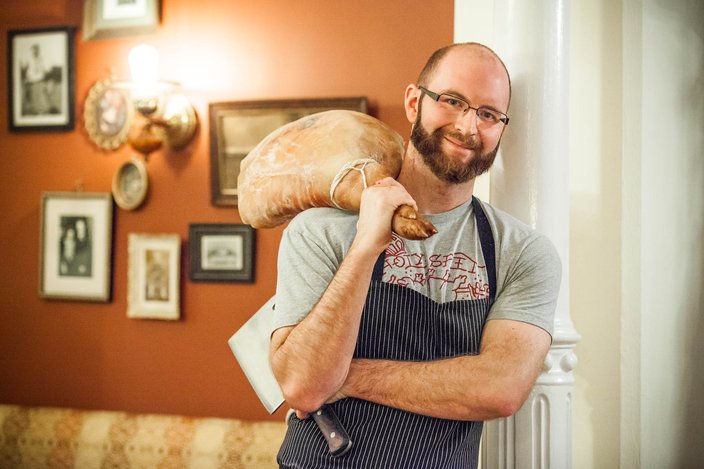 Thom Carroll/PhillyVoice
“I like to have fun with food,” says Brandon Thomas, 29, after describing his latest experiment dehydrating and rehydrating candied beets to get a gummy bear-like texture.

Root vegetables are big this time of year at Russet, where nearly everything comes from nearby farms.

Since he landed there last fall, Thomas has found the restaurant’s hyperlocal, hyperseasonal approach to be challenging - in a good way.

“It forces me to be more creative,” he says.

If he gets stuck, he can always turn to chef and co-owner Andrew Wood.

“Andrew is just a wealth of knowledge,” Thomas says. “He knows everything about everything.”

And Wood enjoys collaborating closely with Thomas on new dishes.

“Brandon really brings a lot of creativity to the table,” he says. “He’s got a ton of good ideas.”

Thomas was Eli Kulp’s sous chef when he took over at Fork, and he worked under Nick Elmi last summer at Morgan’s Pier. But he spent much of his career in New England.

After attending culinary school at Southern New Hampshire University, Thomas had jobs at several restaurants in Boston and in Connecticut, where he grew up.

“I’ve been moving around a lot, as a lot of young cooks do, and I feel that now I’m really settling in in Philly,” he says.