With No. 1 seed Michigan, all-time Philly great Phil Martelli is getting another shot at a national title 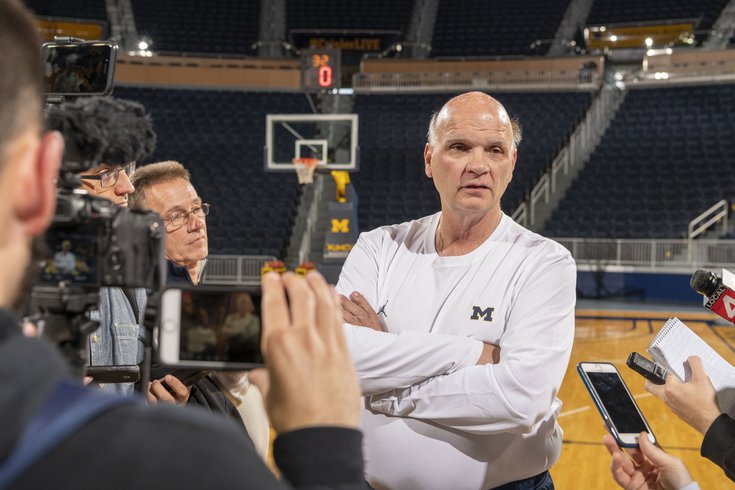 Phil Martelli made special arrangements for April. His daughter had arranged for him to receive a COVID-19 vaccination shot, before he rescheduled his original dose to Friday, March 5.

Martelli did it to rearrange his second shot for Wednesday, April 7 — two days after the NCAA championship game on Monday, April 5 in the Lucas Oil Stadium, in Indianapolis, Indiana.

Martelli, the legendary, long-time St. Joe’s coach, is now in his second year as an assistant coach under Juwan Howard at Michigan, the No. 1 seed in the East Region of the 2021 NCAA Tournament.

Martelli made sure the Michigan players know he rescheduled that second shot for a reason.

The 66-year-old Martelli has climbed a lot of ladders and cut down a lot of nets in March. St. Joe’s all-time winningest coach (444 career victories) has never climbed a ladder or cut down a net on a Monday night in April.

“I’ve had this bucket list in my head for a while,” said Martelli, who still lives the area when he’s not coaching at Michigan, and still roots like hell for the Philly teams. “I wanted to play in the Final Four, and coach in the Final Four. I would like to meet and a have a brief conversation with Bruce Springsteen and meet Tiger Woods.

“My daughter worked her tail off to get me a vaccine dose, and I picked February 19th, because it was an off day from practice. I remember waking up in the middle of the night and realizing that I couldn’t get the second shot, because I would be in the bubble until April 5th, which is the national championship game, which would be too outside for the second dose. I let the players on our team know it’s exactly what I did.”

The Philadelphia area will be represented in March Madness by Drexel (No. 16 seed vs. No. 1 Illinois on Friday at 1:15 p.m. on TBS) and Villanova (No. 5 seed vs. dangerous No. 12 Winthrop on Friday at 9:57 p.m. on TNT). But the area also has Martelli — who represents the best chance to be part of a national title from of the locals involved.

Martelli’s time at Michigan has been invigorating. It’s a big-time program in a big-time conference, the Big Ten. 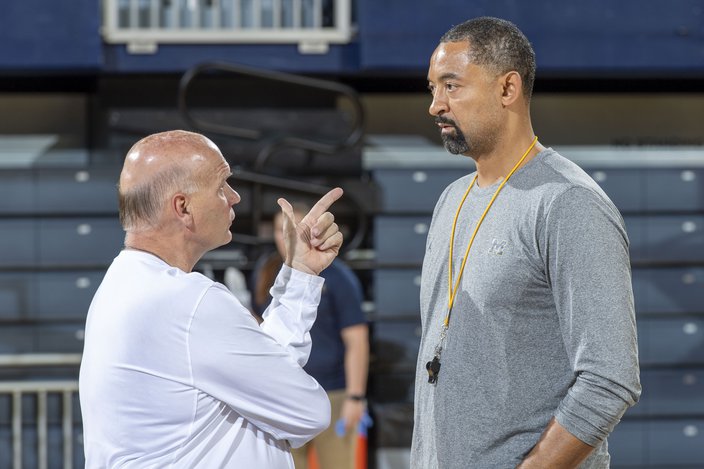 “The pursuit of excellence throughout the athletic department at Michigan, from the nutritionist to the strength and conditioning coach, it’s really eye-opening to me, because it’s on such a large scale and such first class,” Martelli said. “I always felt at St. Joe’s that I was working with such wonderful people that gave every ounce of their energy, and now multiple that by two, and three and four-times as many people.

“It’s been an exhilarating experience. I’m so appreciative how the people here have responded to me. I don’t think they get me all of the way (laughs), and the looks I get, whether it’s a John Chaney story, or a John Thompson story, so I try to keep my stories to one a day.

“Anyone that knows me knows that’s not like me.”

Martelli loves working for Howard and this Michigan team. Martinelli said Howard never talks to his players about being ranked No. 1 and No. 2 in the country. They never speak to the players about what other teams are doing. They do, however, talk about winning a national championship.

Martelli has spoken to Howard about media demands and time management and dealing with a mountainous recruiting attention a program like Michigan receives. At Joe’s, Martelli had no problem going after a major high school player. At Michigan, the players come to the Wolverines.

“That’s a little different,” Martelli said. “I would say my greatest contribution is managing time.”

Michigan has a good chance of playing into April. The No. 1 seed Wolverines (20-4) will open against No. 16 seed Texas Southern (17-8) on Saturday on CBS at 3:00 p.m. ET. Michigan is led by matchup nightmare 7-foot-1 freshman center Hunter Dickinson, who is averaging 14.2 points and 7.6 rebounds.

They are +800, the fourth best odds of any team in the 64-team field to win a championship and +200 to make the Final Four, via Pa.Unibet.com. They're also favored by 26 points in their opening game Saturday.

And if the Wolverines do reach the first Monday in April, there is a good portion of Philadelphia that hopes Martelli will get the chance to climb the ladder and take a snip of championship netting with him.

History, you would think, is on Michigan's side. In the history of the NCAA Tournament, only one No. 1 seed has ever lost to a No. 16 seed, when Virginia infamously lost to UMBC by 20 points on March 16, 2018. 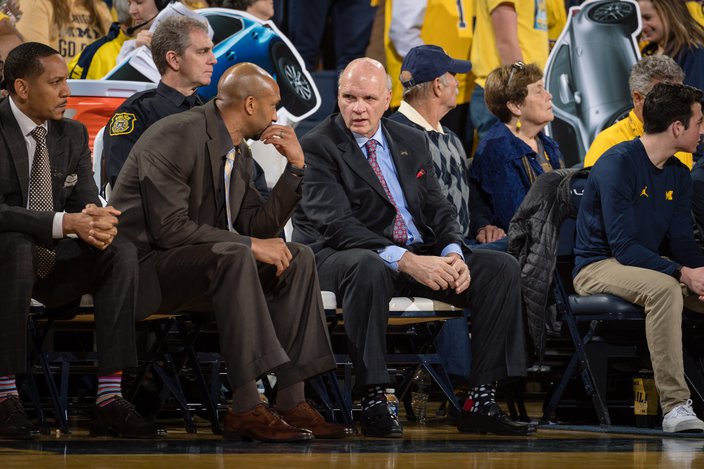 Assistant coach Phil Martelli chats on the bench during a Michigan game.

This is Michigan's third time as a No. 1 seed. The first time, there was a Philadelphia connection. In 1985, in the first year of 16-vs.-1 matchups, the Wolverines nearly lost in the first round, before falling to the miracle-shooting eventual national champ Villanova Wildcats in the second round.

Almost a decade later, No. 1-seeded Michigan of the “Fab Five” fame, which featured current coach Howard, reached the 1993 Final Four, before losing to North Carolina in the championship on Chris Webber’s infamous timeout call in the final seconds.

“I do think about winning a national championship and cutting down the nets, to be honest,” Martelli said. “It goes back to my bucket list. It’s why I rescheduled by vaccine shots. I know how much joy I can see in Jay Wright’s face when he cut down the nets—twice. We have so many guys, I may not even be able to get up the ladder (laughs).

“But to have that opportunity would mean everything. I do know this: When I’m on that floor, I’m still Phil Martelli from Philadelphia. And though I’ll be proudly representing Michigan, I also be representing Philadelphia as proudly as ever.”