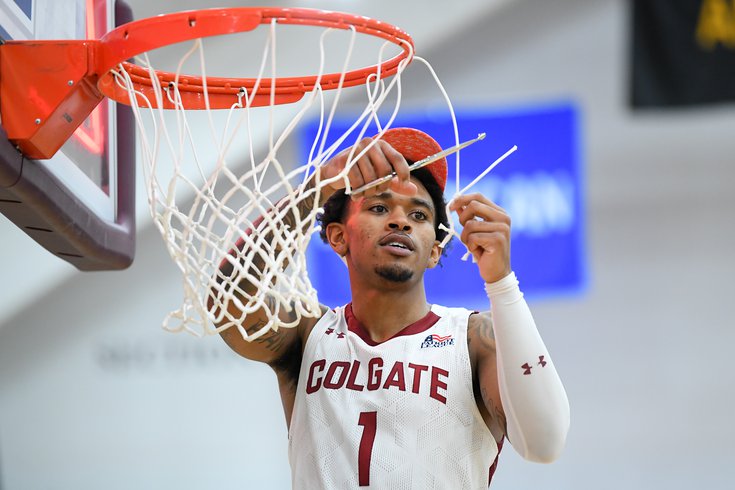 Can No. 14 Colgate shock the world on Friday?

There really is nothing like an upset. It's why most of us (aside from gambling or team allegiance purposes) watch college basketball, and it's what makes March the best time of the year for sports fans.

With 12+ hours of action promised for Friday, we thought it would be helpful to those making brackets, or for those planning their college basketball viewership for maximum enjoyment, to be aware of some of the top teams on upset watch on the first day of games.

First let's define what an upset is — a team that is more than two seeds lower than its opponent pulling off an unexpected victory. With 32 games in the first round, there have been an average of 12.7 upsets each year for the last 35 years — the most ever was 19 in 2014.

So while we will spotlight five upsets today (plus a bonus upset) and five tomorrow, the numbers and history suggest that even more than 10 lower seeds get shocking victories down in Indianapolis.

Here are five top 6 teams that could be heading home sooner than expected — with lines provided by Pa.Unibet.com:

Get ready for a shootout. Both of these teams average over 82 points per game, and neither plays particularly great defense — prompting Pa.Unitbet.com to place this game with a ridiculous 162.5 over/under total, the highest of any Round 1 game. The Razorbacks won an impressive 12-of-13 games before falling to LSU in the SEC tournament. They led their conference in scoring (82.3 ppg) and are led by NBA prospect Moses Moody.

Our upset pick from Colgate, on the other hand, has the kind of senior leadership many Cinderella teams need to excel, stemming from three-year starter Jordan Burns, who has averaged at least 15 points per game every season and almost left school early to be drafted before the 2020-21 season. As a whole, the Raiders play superior perimeter defense and play perhaps the fastest pace of any NCAA basketball team (and score an insane 86.3 ppg). Buckle in for this one.

If the Utah State Aggies want to prevail over the favored (not particularly heavily) Red Raiders, they'll need their seven-foot phenom Neemias Queta to bring his A-game. The Junior averages a double double, and helps anchor Utah State as one of the best rebounding teams in the entire country. Texas Tech was 3-8 against teams ranked in the top 25, and are a team that plays best when they get the most out of their talented guards.

A lot of pundits are high on Utah State, with one USA Today analyst, Keith Jenkins, even taking them to upset No. 3 Arkansas in the second round to make the Sweet 16. Though they have not faced nearly the same level of competition (ESPN says TTU's BPI is 8th, USU's is 49th), the Aggies do allow fewer points per game and score more than the Raiders.

Tennessee is an OK basketball team. They went 10-7 in an above average SEC and were inconsistent, without a lot of offensive leaders to rely on and a mediocre 8-7 stint to finish their season. They seem like the kind of big name mid-major team ripe for picking off.

Which is why Oregon State may be not only a fantastic pick on your bracket, but perhaps a stellar choice against the spread, using Unibet's Bettor Bracket campaign. The Beavers won six of their last seven including a surprise run to beat Colorado in the Pac-12 tournament. With momentum and a less than intimidating opponent, Oregon State could be the biggest no brainer on the board Friday.

In 25 seasons out of the last 35, a No, 13 seed has won at least one game. Purdue has been battle-tested in arguably the best conference in the country, the Big 10, and is rightfully a 7.5 favorite heading into Friday night's tilt. They have the best size in the entire NCAA Tournament and could give the C-USA tourney champs fits down low. They have played 10 top 25 teams and are 5-5 in those games — North Texas is just 0-1 in such games.

And yet, the defense from North Texas, allowing only 61.2 points per game is among the best in the nation. A perimeter game will be key for beating the Boilermakers, a task the Mean Green are no doubt hoping their senior point guard Javion Hamlet will be up to. The team as a whole shoots 37.6% from deep, the 30th best rank in the nation.

Winthrop, the small school out of South Carolina boasts an impressive 23-1 record coming into the tourney this year and faced little resistance in the Big South tournament en route to earning the conference's automatic bid. Here's more from the Indianapolis Star:

The Eagles are definitely a team to consider for your Cinderella. They were the preseason Big South favorite and lived up to the expectations, winning their first 16 games — extending their winning streak to 21 over two seasons — before a 57-55 loss to UNC-Ashville on Jan. 29. They had 13 scheduled days off following that game but returned to win their final four regular season games then blew through the Big South Tournament, winning by 29, 21 and 27 points to finish 23-1.  [indystar.com]

This is going to be a difficult first-round test for Villanova, who will be without Colin Gillespie and could be without fellow guard Justin Moore, who suffered an ankle sprain and was ruled out of the conference tourney.  In fact, we wouldn't be surprised if Winthrop not only covered, but won outright on Friday. --Matt Mullin

The 10-seeded Scarlett Knights are actually favored according to Pa.Unibet.com over the Tigers in a battle of at large tournament participants from power conferences. They appear to be pretty evenly matched, with Big 10 combatant Rutgers boasting an old-school inside out style while the ACC's Clemson starts with defense. This one is a true toss up, and by our definition technically fits as an upset pick.