Five starting pitchers the Phillies could trade for on deadline day 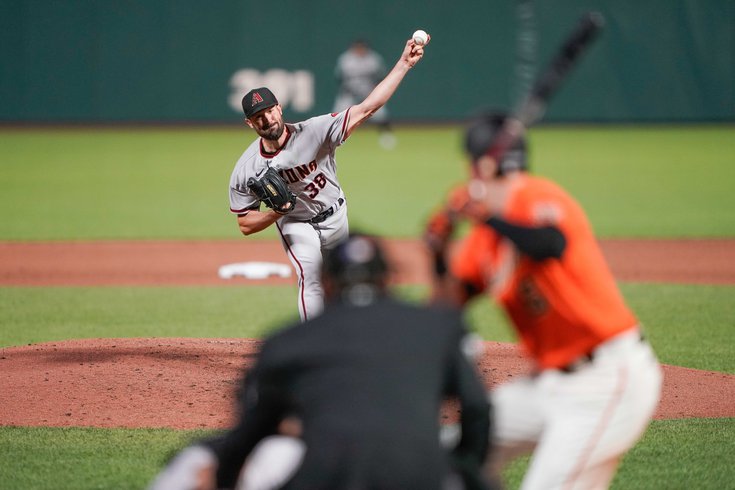 The Phillies have just hours left to decide if they want more outside help to aid them in making a push for a playoff spot during the current shortened season. With eight postseason slots up for grabs in the NL, the momentum seems to be in their favor after winning five of their last six against NL East opponents.

The team is in need of upgrades in a bevy of places, like the bullpen or outfield, but it's starting pitching that should be their focus right now.

With an offense that is producing the third most runs per game in all of baseball, and a bullpen that has contributed to making the Phillies staff the ninth worst (ERA-wise) in MLB, giving their hitters just a little more support is of paramount importance.

So is giving them enough warm bodies to handle the schedule to come in September. Here's more from Matt Gelb and Meghan Montemurro of The Athletic:

It’s possible the Phillies add to their rotation instead of the bullpen, perhaps as a way to reallocate resources. They will have to run a six-man rotation for much of September — they’ll even need a seventh starter, during the doubleheader madness — and this is a market they have explored. If the Phillies stay on turn for the remainder of the season, they would need a sixth starter three times and a seventh starter twice.

The Phillies, if they acquired another starter, could shift Spencer Howard and Vince Velasquez to the bullpen as power arms. But Girardi wasn’t convinced that the rotation was a trade target even with the unusual schedule situation.

“Well, we still have Vinny and I think that we could bullpen maybe one or two of those doubleheader (games) if we had to because we have some guys in our bullpen that can give us some distance,” Girardi said. “So I’m not so sure that’s what we would be after. But if something falls in your lap. hey, it falls in your lap.” [The Athletic]

Clearly, relying on Velasquez and rookie Howard — who is working through being thrown into the fire — down the stretch is something the Phillies would be smart to avoid.

Here's a look at five reportedly available starters from teams expected to be interested in selling that the Phillies could target before the 4 p.m. deadline:

Lynn has two years of team control and has been simply incredible for the otherwise uninspired Rangers, going 4-1 with a 1.93 ERA in eight starts this season. The 33-year-old has a solid track record and, as we alluded to in the above table, is someone who does not have trouble with the long ball (he averages just 0.8 homers per nine over his nine year career) — something Philly could use.

As will be with the entire list of starters, the competition for his services could be fierce with so much interest. Very few teams are out of playoff contention midway through the season. Philly hasn't publicly been rumored to be targeting Lynn, but MLB trades use so many smokescreens that rumors mean very little these days.

The Phillies missed out on Clevinger, who was dealt to San Diego late Monday morning:

Reports are saying that Clevinger — a 29-year-old with two years of team control remaining before free agency — will be moved during the deadline. Rumors have surfaced suggesting that the starting pitching-starved Braves are in pursuit of Clevinger. The Braves are currently the only team ahead of the Phillies in the NL East, so perhaps blocking their rivals while netting a No. 3 starter is a smart move.

With Jake Arrieta looking to be jettisoned after 2020, Clevinger slides perfectly into the role behind Nola and Wheeler for the next two seasons. Clevinger has a 3.18 ERA in four starts this year.

Bundy is 27 and has one year of arbitration ahead of him and a modest salary that could theoretically fit with the Phillies, if they shed a piece in a trade or took on some money (they are looking to stay under the luxury tax threshold if they can). He's also having a breakout season.

The former fourth overall pick has a 4-2 record and 2.47 ERA. He has ace potential and may be costly prospect-wise, but he's really the kind of pitcher who could thrive by taking the momentum from his success and bringing it to a playoff race.

Cueto has been okay in five starts and has a salary way higher than the lowly Giants are comfortable paying. He is under contract through 2021 with an option in 2022, when he will be 36 years old. Cueto is an experienced two-time All-Star with veteran leadership skills and great strikeout stuff.

If the Phillies are comfortable taking on his money next year in 2021, when they'll have more financial flexibility, perhaps they can talk San Francisco into handling the rest of his 2020 number.

Another potential Phillies' target is off the board as of 1:50 P.M., as the Blue Jays stepped up and traded for Ray.

The #BlueJays get #Dbacks pitcher Robbie Ray, per @longleysunsport

The underachieving D-backs paid a pretty penny to keep Ray this past offseason, and for whatever reason he's struggled in Arizona as their team has struggled as a whole. After going 46-42 with a 3.96 ERA over his first five seasons in the desert, the left-hander is 1-4 with a 7.84 ERA this season. He sounds like the perfect candidate for a change of scenery.

The Phillies also could desperately use a lefty, and with Ray's deal set to expire at the end of the season the Phillies could leverage his downslide into a team-friendly deal for 2021.