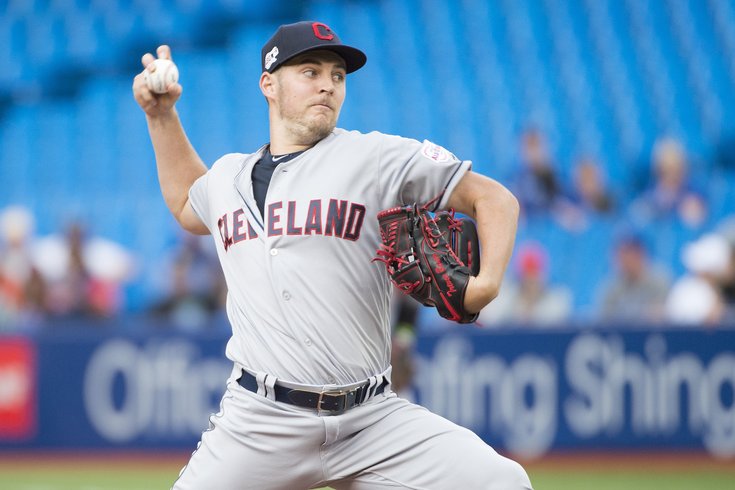 Trevor Bauer may be on the move after all.

The Phillies took some big swings this offseason, like trading for one of the best catchers in baseball (J.T. Realmuto), or giving a player $330 million over 13 years (Bryce Harper).

John Middleton, one of the team's owners, said the team might get a little stupid after all. But were they saving their biggest move for the middle of the season?

According to MLB.com insider Jon Morosi, the Phillies have discussed trading for Indians ace Trevor Bauer.

#Phillies and #Indians have discussed a possible Trevor Bauer trade, sources say, as I reported on @MLBNetwork this morning. @MLB

This is in stark contrast to what we suspect about the Phillies — that they will be cautious and won't expend their best prospects for one player. Bauer is 28 and has a season of team control through arbitration in 2020. This makes him more or less exactly what the team needs, as they lack starting pitching not only this season, but beyond.

Bauer's price could be high, perhaps in the range of centerfielder Mickey Moniak, Philly's former No. 1 overall pick or recently called up outfield prospect Adam Haseley. Bauer lacks the proven track record of a true ace but is performing at a level that would surely slot him just after Aaron Nola in the Phillies withering rotation.

Here's what MLB.com's Mark Feinsand said a month ago when discussing the a potential move of Bauer to the Phillies:

The club’s No. 1 prospect, 3B Alec Bohm, is likely off-limits in any trade, but right-hander Adonis Medina would probably be on the table. Then again, anybody could be on the table given that they dealt top prospect Sixto Sanchez in the J.T. Realmuto trade during the offseason. Adam Haseley (the team’s No. 3 prospect per MLB Pipeline) or former No. 1 overall Draft pick Mickey Moniak (No. 9) could be a good gamble for the Indians, who are also seeking future outfield help. [MLB.com]

Interestingly, the Indians are in much better position in the standings than the Phillies. Cleveland is currently in possession of the first wild card spot in the American League and just three games out of their division. Their decision to trade Bauer would obviously hurt their playoff chances.