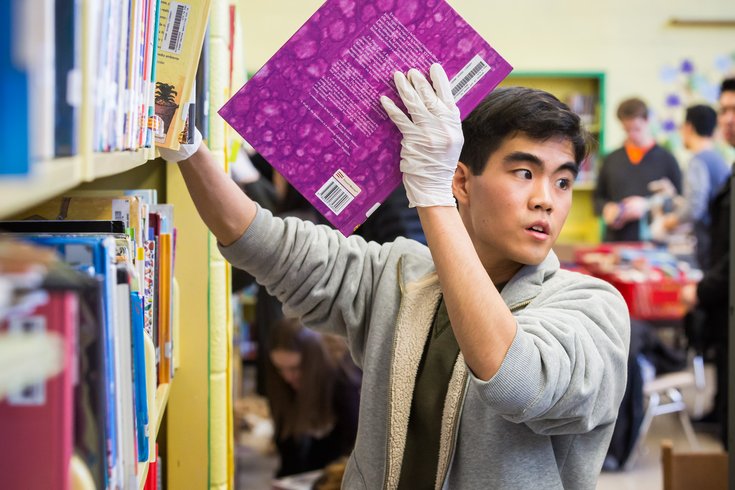 Eric Tsai, a 1st-year student at the Curtis Institute of Music, cleans and reorganizes books in the library of Cramp Elementary School, Monday, Jan. 16, 2017.

Deanda Logan scurried from room to room at William Cramp Elementary School, offering directions and answering questions as she would on any given day of the year.

But Monday was not any old day. And not simply because it marked the annual Martin Luther King Jr. Day of Service. The Philadelphia event last year was the largest in the nation, with more than 140,000 volunteers citywide working on 1,800 projects.

On Monday morning, some 120 volunteers flooded the school in the Fairhill section of Philadelphia with a shared goal — reviving a library that, in many ways, has not truly served as an actual library for a long time.

Dozens of volunteers, many from the Curtis Institute of Music in Center City, spent several hours cleaning shelves and organizing piles of books. Downstairs in the auditorium, other students rehearsed ahead of an afternoon concert that raised funding for a number of library renovation projects, including the purchase of new furniture.

"Tears of joy," said Logan, the school's principal. "It's just incredible to see so many people who are saying that they care. And not just saying it — they're demonstrating how much they care and how they want to make a difference in our children's lives. For that, we're so grateful."

William Cramp Elementary is one of nine schools that Mayor Jim Kenney's administration selected as part of its new community schools initiative, which aims to transform the schools into neighborhood hubs for social, health and other services.

As part of that initiative, the school is set to receive additional funding and support to provide those services. But the school's community partners have rallied to provide the resources needed to resuscitate the library.

Like many schools in Philadelphia, Cramp Elementary lost its librarian several years ago due to the state budget cuts under former Gov. Tom Corbett. Without someone regularly maintaining the library, it fell into disarray.

Students can still check out books, but without an organized system in place, it's not something they do with any regularity. Instead, the library mostly serves as a gathering space for a community meetings, tutoring sessions and a hip hop dance class.

"The space is utilized," Logan said. "However, we want to use it for its intended purpose, which is as a library."

A nearby Christian ministry, Urban Hope, has been spearheading the efforts.

Last year, the ministry completed a mural of the city's skyline on one of the school's walls. And it is helping the school find a retired librarian who can volunteer several days a week, including a day that will be open to the entire community.

"In our community, it's all about partnerships," Urban Hope director Jason Holt said. "For us, the reality that this library is going to be open next year is amazing. It's not just for the kids, it's for their families too."

Urban Hope partnered with the Curtis Institute to organize the benefit concert, which aimed to raise at least $2,000 for library projects. The school previously received grants to purchase new books that are popular with the students, such as books in the "Diary of a Wimpy Kid" series.

The Curtis Institute, which also provides a violin instructor through its Artist Year program, brought out dozens of volunteers to get their hands dirty.

Some cleaned out closets. Others constructed a storage shed outside. But many were in the library organizing books.

"I'm really excited to help them," said Sarah Tako, a fourth-year Curtis student from Stillwater, Minnesota. "I can't imagine not having a library."

Come next September, that should no longer be the case at William Cramp Elementary.