MLS will allow liquor sponsorships on jerseys. Which local booze would each Philly team choose? 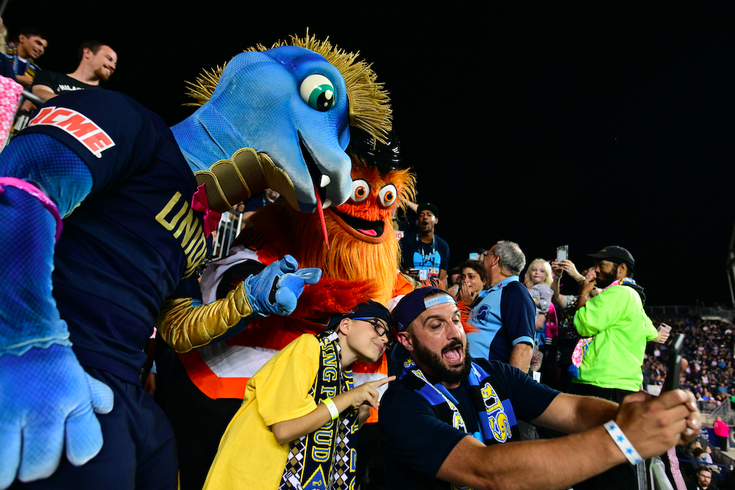 Phang and Gritty, partying it up together. Can you imagine what would happen if you gave these two Philadelphia mascots a couple beers?

It's kind of a neat idea, even if only a few teams capitalize on the possibility, and it made us think about which company the Philadelphia Union should partner with. And then we got carried away.

We took a stab at figuring out which local booze-creating companies would make sense as sponsors for each of the city's main sports teams, plus a bonus round. Here's what we came up with.

To me, this is the most immediately doable sponsorship. The Union have sported Horsham's Bimbo Bakeries for years. It's pretty funny, and it's also become surprisingly recognizable, but what if the Union's kits had the word "Victory" in big lettering across the front? How would you not feel great taking the pitch, with your end goal already written on your chest?

It feels like a self-fulfilling prophecy. You put "Victory" on the Union kits, I guarantee they'll win the MLS Cup the very next season.

Now we'll start the puns. Ardmore's Tired Hands Brewing Company fits the Phillies almost too well. Baseball has the most games, it requires the most of its players' hands, and it basically invented load management with pitch counts and wait times between starts for pitchers. Why? Their hands are tired!

It would be very funny if the jersey sponsorship also came with a broadcast deal, where the NBC Sports Philadelphia booth introduced a pitching change sponsored by Tired Hands.

This one just makes too much sense. The Philadelphia-based brewery is called Yards. The Eagles are tasked with moving the ball down a field marked by the yard.

When Zach Ertz makes his first catch of the game, Merrill Reese could say, "Zach Ertz is picking up those Yards!" over the PA system at Lincoln Financial Field, with the Yards logo sliding seamlessly into the on-screen wording. And every field goal attempt, which is just a three-minute discussion of yardage, could be sponsored by Yards. This is a no-brainer.

For better or worse, the Flyers are often known as the Broad Street Bullies. At their most effective, the Flyers play with an edge and torment opponents, drawing bad penalties out of frustrated superstars. What better way to describe that mentality than Evil Genius? Bullies are evil. Genius implies there's some sort of strategy behind the madness, and not just random antagonism.

Plus, after a squeaky-clean first season, I'm sure Gritty has some tricks up their sleeve in 2019-20. Gritty is absolutely an Evil Genius. (Yes, I know Evil Genius brewed a Trust The Process beer. It just didn't feel like the right fit!)

The 76ers are the team which most thoroughly embraces the city's "Birthplace of Independence" vibe, from the color scheme to the dribbling Ben Franklin alternate logo, and obviously the team's name. It makes sense, then, to give the team a brewing company named directly after the city.

Look, I'm not saying I'm a genius for putting these two together... because I'm not, it's actually a very obvious pairing. Philadelphia Distilling's flagship gin brand, Bluecoat, partnering with the 76ers' G-League affiliate, the Blue Coats, is so perfect that it fills me with joy.

It would be the ultimate advertising opportunity for a sports team: an advertisement that is also your name means you don't surrender crucial identity-building real estate on your jersey, while also bringing in that sweet ad revenue. Thank me later.