Mob Talk on Scorsese's 'The Irishman': There's a difference between cinema and reality

The Netflix film about Philly mobster France Sheeran debuts on the streaming service today, but how true-to-life is it? 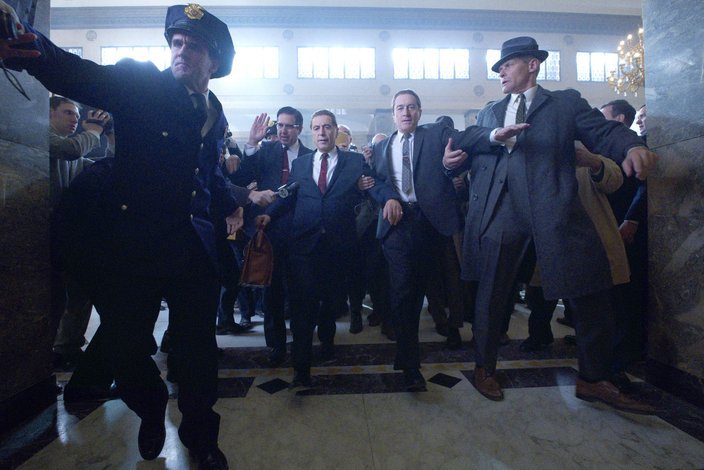 A scene from Netflix's 'The Irishman,' directed by Martin Scorsese and staring Al Pacino and Robert De Niro. In the new episode of 'Mob Talk Sitdown,' expert George Anastasia questions the validity of Frank Sheeran's claim that he killed Teamster leader Jimmy Hoffa.

In the latest episode of Mob Talk Sitdown, Philly mob experts George Anastasia and Dave Schratwieser look at the murder of Jimmy Hoffa as portrayed in Netflix's "The Irishman," directed by Martin Scorsese and starring Robert De Niro, Joe Pesci and Al Pacino.

Anastasia has doubts about the validity of the claim by Sheeran (played by De Niro in the movie) that he killed Hoffa.

After a run in theaters, "The Irishman" became available to stream on Netflix on Wednesday, Nov. 27.

But first, the Mob Talk Sitdown experts discuss reputed Philadelphia wiseguy Salvatore Piccolo, who got slapped with a 12 1/2-year prison sentence on drug charges. And is there more to come for other Philly organized crime figures?

Piccolo lawyer has a few things to say about the case, but Piccolo's nephew, mob captain Domenic Grande avoided Schratwieser's camera and questions while leaving the federal courthouse in Camden.

Watch the latest Mob Talk Sitdown (and a previous episode) below, and subscribe to the YouTube channel to view past and future episodes:

In Episode 35 of Mob Talk, Anastasia and Schratwieser acknowledge some notable recent anniversaries in the Philadelphia organized crime world. But these are not the kinds milestones that warrant a celebration.

A mob hit, a miss and a well-known mob cooperator are among topics discussed.

October marked the 20-year anniversary of the 1999 murder of Philly Mob soldier Ron Turchi. And it has been 30 years since the brazen attempted hit on mob boss Nicky Scarfo's son, Nicky Scarfo Jr. on Halloween night 1989. The shooting happened inside Dante & Luigi's restaurant in South Philly. Anastasia says the attempted killing of Scarfo represented a power shift in the Philly Mob.

Plus, Sammy "The Bull" Gravano makes a big splash with an explosive new online interview.