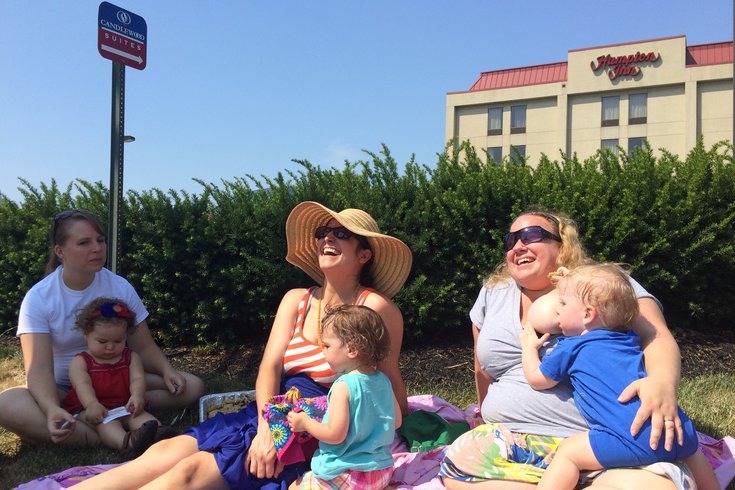 A group of mothers gathered for a "nurse-in" in front of the Hampton Inn in Bordentown, New Jersey to support Ariana Gossard.

Over a dozen moms and a few dads formed a “nurse-in” at the Hampton Inn in Bordentown, New Jersey on Sunday morning to support a single mom who says she lost her job there because she asked for breaks to pump breast milk.

“They told me there wasn’t a position that could accommodate my needs,” said 21-year-old Ariana Gossard of Pemberton Township, who asked for two breaks per day to pump milk for her newborn daughter. Her story inspired several women to protest at the hotel by breastfeeding in public.

“I just I don't even know that I had the words to express the shock I had,” said protest organizer Alison Litvack Gary of Bordentown. She had never met Gossard, but after hearing about her story on social media she felt she had to do something. 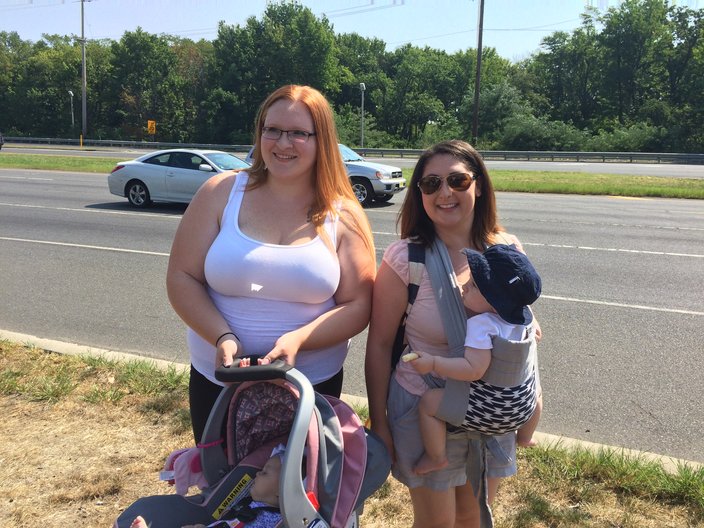 From left to right: Ariana Gossard and Alison Litvack Gary with their children. (Sharon Lurye/PhillyVoice)

“She not only is a working mom, but she's a single mom,” said Litvack. “I don't know how single moms can do that in the first place, so she already is a superstar in my mind. And to now be facing unemployment – it really speaks to the lack of priorities that a company like Hampton Inn has.”

The atmosphere at times felt less like a protest and more like a summer play-date. Mothers lounged on the grass, laughing over stories about toddlers and husbands while their babies nursed. Mom Brielle Petrella of Allentown, New Jersey even brought over a plate of lactation cookies, fortified with ingredients that promote milk production.

“Nursing moms are kind of like a tribe. We have a bond that is unspoken,” said Danielle Dunn, of Lawrenceville. 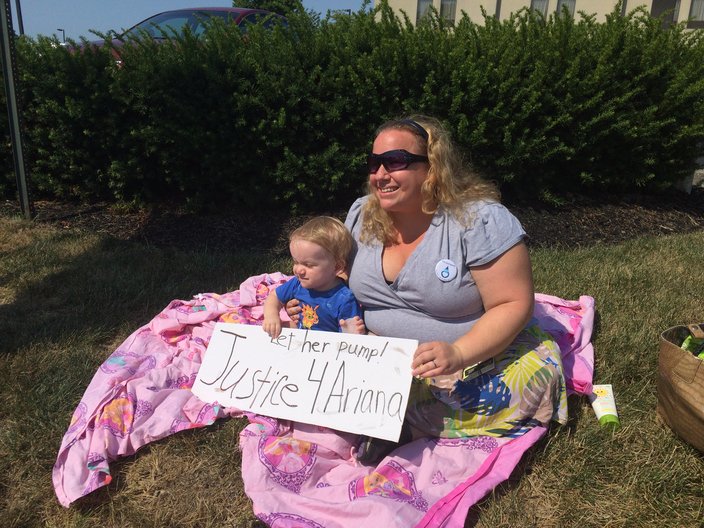 Nicole Bucci and her son Lucas, of Maple Shade, hold up a protest sign. (Sharon Lurye/PhillyVoice)

Representatives from the hotel declined to comment to reporters. Management sent police to inform the protesters that they were not allowed to park at or stand in front of the hotel, so they sat on a public strip of grass next to the highway. There were no attempts to otherwise contact protesters or interfere with the protest.

Gossard didn’t plan to attend the protest at first because she was nervous about possible retaliation. However, with her mother’s support she decided to go.

“She’s a strong woman so I’m sure she’s going to find another job. But in the meantime, it will be difficult for her,” said Ariana’s mother, Deborah Gossard. Ariana said she is saving money she got from temporary disability benefits.

At least now she has found her tribe – a group of mothers ready to back up her right to pump.

“It feels really great. It’s a lot of support and I really do appreciate it,” she said.