Last month, we wrote about how the Sixers' attendance numbers have climbed out of the NBA's basement and reached their highest number since before the team traded Allen Iverson over a decade ago.

That's in large part due to the emergence of Joel Embiid as one of the league's most entertaining players – as well as the winning they've enjoyed as a result not just the 7-foor-2 rookie's development, but the development of other young players like Dario Saric and T.J. McConnell. And when first-overall pick Ben Simmons finally hits the court, you can expect those numbers to continue to rise.

In fact, fan optimism over the team's future is already evident.

Sixers season ticket packages for the 2017-18 season are being purchased at a ridiculous pace, even in the wake of their recent string of public missteps involving the health of Simmons and Embiid, as well as the decision to sit Jahlil Okafor twice without finalizing a trade.

According to a source, the Sixers have sold 2,000 new, full-season packages in the last 10 days alone, a team record. Considering the Wells Fargo Center seats just under 20,000 people, that means nearly 10 percent of the tickets for all of next season have been sold in less than a week and a half.

The excitement surrounding the Sixers this season has also translated to a boost in local TV viewership as well, despite ratings being down across the league by an average of 15 percent.

The season’s best ratings story so far is in Philadelphia, where 76ers games on CSN Philadelphia are up a whopping 80 percent this season (1.93) as the team has shown improvement. Rockets games on Root Sports (up 23 percent to a 1.91) and Pelicans games on FS New Orleans (up 20 percent to a 1.43) also showed impressive growth.

But the big story so far this season deals with ratings drops, even from good teams and basketball-crazy markets.  [sportsbusinessdaily.com]

Those major markets seeing big drops in ratings include the top three teams in the Eastern Conference (Cleveland, Boston and Washington), according to SBJ's report.

More impressive, perhaps, is the fact that the Sixers' 1.93 average rating is closer to the NBA's top five teams than its bottom five. They didn't provide numbers for all 27 teams they analyzed, but they did include the five teams with the best ratings and the five with the worst. Here's a look at where the Sixers landed: 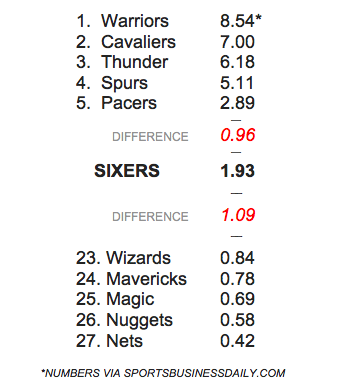 Because the Sixers won just 47 games over the previous three seasons combined – and have already won 21 this season – it's not surprising that their TV audience is growing, but this illustrates just how much it's grown and that it isn't part of some larger, league-wide ratings increase.

But Sixers games aren't just available on your television anymore. You can now stream the games on pretty much any device, and according to CSN Philly, when you add in those numbers, Sixers viewership has grown by quite a bit more than the 80 percent increase from TV alone.

Here's more from a CSN press release just before the All-Star break:

Sixers game broadcasts with Marc Zumoff, Alaa Abdelnaby and Molly Sullivan are averaging a 1.9 HH rating, up 111% over last season. Sixers Pregame Live ratings have increased 150% over last season, while Sixers Postgame Live is up 33%. The last time the Sixers have reached these numbers was in the 2011-12 season.

Sixers live streaming, which includes live game broadcasts and Sixers Pre and Postgame Live, is up triple digits over last year. Over 10 million minutes have been consumed so far this season (up 201%), while unique visitors are up 214% over the same number of games last year.

Any way you slice it, the Sixers, who return to action Friday night at home against the Warriors, are a team on the rise.

Now back to those NBA Trade Deadline rumors...