They provide a boost of immunity in the nose, where the coronavirus enters the body 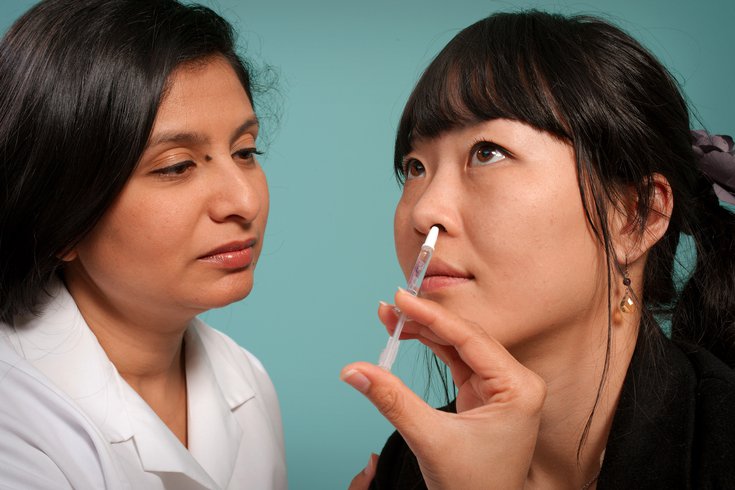 Scientists are developing COVID-19 vaccines that could be administered in the nose. Above, a health care practitioner administers a flu vaccine to a woman.

Nasal COVID-19 vaccines have the potential to target the coronavirus right where it enters the body – the upper airways. Early data shows this type of vaccine could have a better shot than current vaccines at preventing infections – not just reducing the severity of disease.

More than a dozen potential COVID-19 nasal vaccines are in the development stage, but it could still be years before one is available in the U.S.

Some experts are worried that the concerted effort of the public and private sectors that led to the accelerated development and approval of the first COVID-19 vaccines is not being applied to the new generation of vaccines. The first vaccines were brought to market in about nine months.

Research continues to show that the Pfizer-BioNTech and Moderna vaccines reduce the risk of hospitalization and death against emerging variants, but they are not as effective at preventing infection itself.

Without infection, people would be protected from long COVID, and would not spread the virus to others, which increases the risk of the virus mutating.

Some experts say this lack of protection against infection is due to how the vaccines are administered. The Pfizer-BioNTech and Moderna vaccines are both administered intramuscularly, providing what is referred to as systemic immunity. Antibodies build up in different organs of the body, but produce little to no immune response in the nose.

The perceived advantage of nasal vaccines is that they provide a boost of immunity right in the nose where the virus first enters the body, making full elimination of the virus more likely.

Dr. Anthony Fauci, White House chief medical adviser, told NBC News that with these types of vaccines, the antibodies to fight against the virus are "right there on the front lines" and are more likely to prevent an infection all together. This is because antibody buildup occurs in the mucosal tissue – the inner lining of the nose, throat and mouth.

Some experts tout these vaccines as the best way to nip infection in the bud, but more research is needed to confirm their effectiveness. Most nasal vaccines for COVID-19 in the U.S. are either in the preclinical stage or the early stages of clinical trials.

One of the challenges researchers of nasal vaccines have faced is the lack of standardized tests for mucosal immunity. This makes it harder to measure compared with systemic immunity, which has an established assay to determine antibody levels in the blood.

Another difficulty has been recruiting enough participants for clinical trials, especially those testing primary immunization and not booster doses. Many vaccine developers are testing them as both.

Researchers at Mount Sinai in New York City have developed a nasal vaccine which is currently being investigated in a phase 1 clinical trial. The vaccine targets the spike protein of the coronavirus by using a modified version of a virus that usually infects birds. Preliminary research has shown that it can produce an effective immune response in mice.

Akiko Iwasaki, an immunologist at Yale University, is also involved in research on nasal vaccines. Her team is investigating both a protein-based spray and an mRNA vaccine, which is delivered into the nose using nanoparticles.

Both candidates would be used as a booster dose to build upon existing immunity from previous vaccination. So far, research has shown that nasal vaccination accelerated elimination of the virus in nasal passages and lungs as early as two days post exposure.

A nasal version of the vaccine made by AstraZeneca and the University of Oxford is also currently in clinical trials. In preclinical studies, the intranasal vaccination reduced virus concentrations in nasal swabs.

While it is still too soon to know if these vaccines will prove to be safe and effective enough to be approved by the U.S. Food and Drug Administration, there are some nasal flu vaccines available in the U.S., such as FluMist.

"At this point in the pandemic what we need is an infection-blocking vaccine and not vaccines that only protect you against severe disease," Iwasaki, who recently co-founded a company called Xanadu, told The Scientist.